Butterflies That Live Near Icy Roads Get Bulked up Like Whoa

Do you even lift, bro? 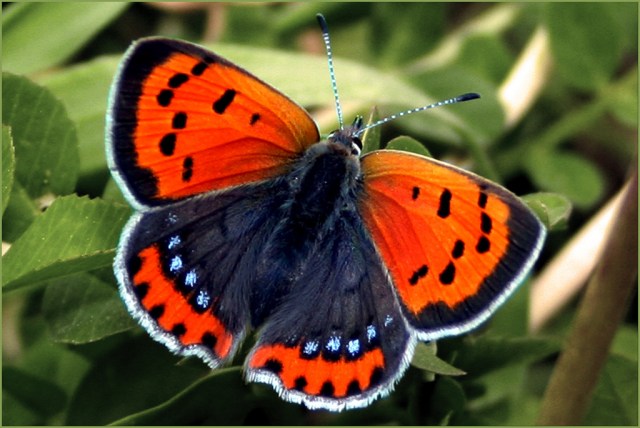 You know that saying about how a butterfly flapping its wings can trigger weather abnormalities halfway across the world? It goes both ways, actually—with some help from humans, of course. Apparently, roads that are regularly salted in the winter lead to butterflies with bigger eyes and muscles.

A team stationed at the University of Minnesota recently charted the effect that rising levels of sodium in milkweed plants might have on the monarch butterfly population nearby. According to their research, roadside milkweed plants have sixteen times as much sodium as those even 100 meters away, because salt is used to clear Minnesota roads of ice in the winter. Gosh, who knew that car culture in the United States would have an effect on wildlife?

In this instance, that effect is complicated; butterflies who feed off of the super-salty milkweed are 6 times less likely to survive beyond the caterpillar stage. However, the ones that do survive experience wide changes in development. Male butterflies were more likely to grow larger flight muscles, and female butterflies grew larger brains and eyes. The team of researchers attempted to replicate these results with common cabbage white butterflies and found similar results.

While those butterflies who do survive come out of it with rockin’ butterfly superpowers, team leader Emilie Snell-Rood stresses that this doesn’t mean we should ignore all of the insects who die from this overexposure to sodium—especially considering that road salt is also detrimental to a lot of other animals in the area, such as tadpoles.

“A slight increase in a limited nutrient can be beneficial, but too much of a good thing is usually bad,” Snell-Rood said.

Sure, tell that to Bruce Banner. He got shot up full of gamma rays, and now he gets to turn into an awesome giant green rage monster who sometimes… levels cities… okay, wait, maybe you’re on to something here.

(via New Scientist, image via Gok)