There is More Than One First-Gen iPhone on eBay for ,000 | The Mary Sue 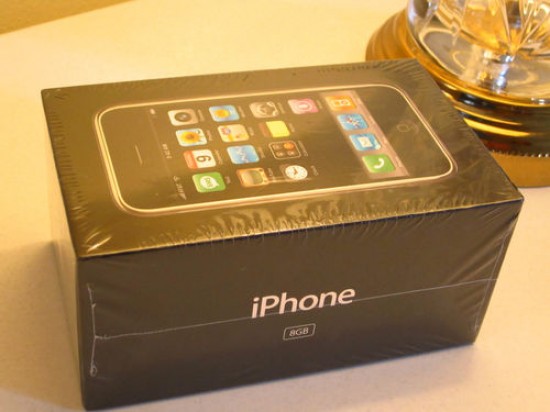 The “collector’s item” from eBay user samsonbible only has the Buy It Now price of ten grand, though the account does come with a 100% positive feedback rating, something a tad rare on eBay considering feedback ratings display decimals. Amusingly, the title of the posting calls the iPhone a “rare collectors vintage box set,” but since it’s on eBay, is obviously in all caps and flanked by asterisks. The model offered up for sale is an 8 GB AT&T model, so it’s sure to not work so well considering the carrier and storage space — that is, you know, if you’re of the sort to pay ten grand for a “rare collectors vintage box set” then take it out of the sealed packaging.

Of course, if people see someone selling an item for much more than it’s actually worth, said people are going to want to get in on the action. eBay user phsledge also has a new and sealed 8 GB first generation “collectors original rare” iPhone up for sale, with the same Buy It Now price of $10,000. However, phsledge — who also has a 100% positive feedback rating — seems to understand the significance of that number, and has generously started the bidding out at only $2,000. At the time of writing, the auction ends in five days, and there are no bids. The listing also amusingly contains reviews of the iPhone — not the specific one up for auction, but the iPhone as a brand of phone — dating as far back as 2007, with equally amusing subject titles as “iPhone Multi-Media Device.”

eBay can be both a noble and sordid beast, and honestly, it’s not possible to know whether or not the very first iPhone would or wouldn’t become a collector’s item until it does. The collector’s item game is a tricky one, as your closet full of sealed Power Ranger action figures and my closet full of Marvel trading card sets that are now obtainable on eBay for only ten bucks like to remind us. Spending ten grand on the first iPhone just seems like too dangerous of a game, but hey, this is all pretty funny.