Beta Raspberry Pi PCs Going for as Much as $2,714 on eBay 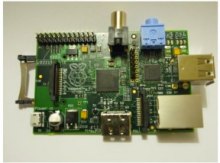 The Raspberry Pi, everybody’s favorite $25 PC, has finally gone into beta, and some of those beta boards are up for auction by the company on eBay. It is a $25 PC though, that’s the selling point; how much could it possibly go for? Oh, I don’t know, how about $2,714 (£1,750), and that’s with 5 days remaining. For all of you who are screaming “That is missing the point!” right now, there are a couple of mitigating factors that make this all make a little more sense. First of all, these are limited edition, man. Haven’t you ever taken a class in Economics? Also, 100% of the purchase price is going to the Raspberry Pi Foundation, devoted to promoting the study of computer science, so it’s for a good cause.

It seems that the Raspberry Pi guys are fully aware that normal people who just want a Pi aren’t and shouldn’t be bidding on these auctions. After all, the Pi is slated for it’s proper release later this month. Instead, they are hoping rabid early-adopters and philanthropists alike will shell out, and it looks like they are. As for the rest of us, we’ll have to wait a little bit before we can play some Quake 3 on the leanest system available.