Magic: The Gathering’s Throne of Eldraine Trailer Is a Cinematic Masterpiece & Brawl Is Coming to MTG Arena

In three minutes and fifty seconds, the trailer for the upcoming Throne of Eldraine expansion for Magic: the Gathering, gives you a better love story than Titanic, as a gingerbread couple attempts to escape death as the Planeswalker Garruk does battle with some palace guards, putting their lives at risk.—all while a cover of Bob Crewe and Bob Gaudio’s “Can’t Take My Eyes Off You” plays in the background.

At the end of the trailer, just when you think that something cliché has happened, it comes in with the twist, and let’s just say we may have our first Gingerbread Planeswalker—or legendary creature, at least—and I’m here for it.

Also, on September 26, after a successful open beta that saw over 1 billion games played, MTG Arena, a free-to-play online version of MTG, will officially launch on Windows alongside Throne of Eldraine. Players can visit an exciting new plane where Grimms’ Fairy Tales and Arthurian legends collide for high fantasy and incredible adventure.

Additionally, the “Brawl” format will be coming to MTG Arena. So, players on Arena will be able to get a sneak preview of the upcoming card set.

New Format: Brawl lets players bring one Legendary creature or Planeswalker along with 59 Standard cards in this twist on the Singleton format

Fairy Tales Fight Back: Mythic Rare Legendary Creatures go beyond the borders of the card and come to life with special enter-the-battlefield animations!

Players who joined Arena during the open beta will receive an exclusive Fblthp avatar and card back, as a special thank you for being a part of the process. There’s still time to earn this reward before launch on September 26. I’m excited to experience the all-new world of Eldraine. So far, all of the card previews, which I’ve been keeping track of on Scryfall, have looked amazing, some of the stand-outs being: 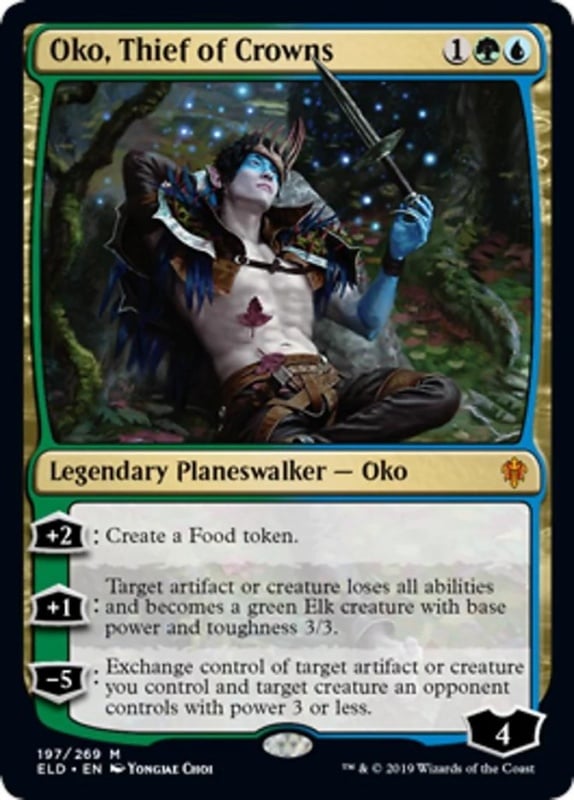 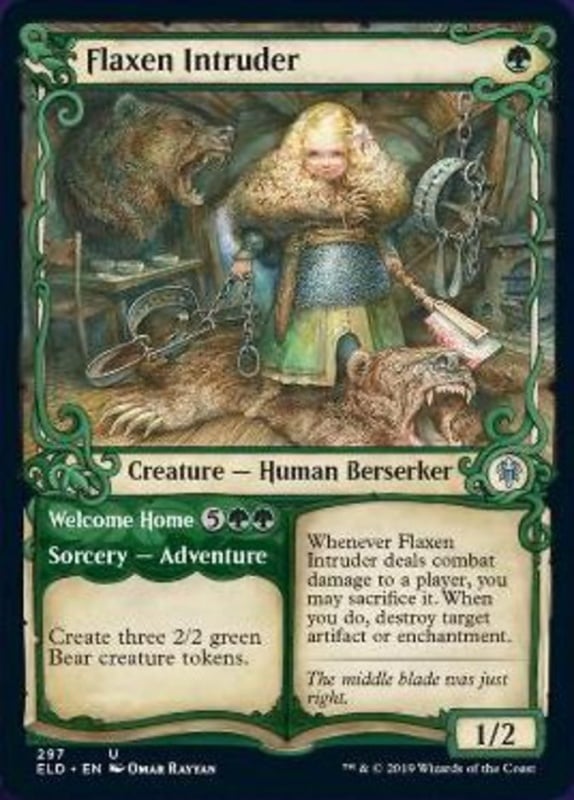 Flaxen Intruder {G}
Creature — Human Berserker
Whenever Flaxen Intruder deals combat damage to a player, you may sacrifice it. When you do, destroy target artifact or enchantment.
Welcome Home {5}{G}{G}
Sorcery — Adventure
Create three 2/2 green Bear creature tokens. (Then exile this card. You may cast the creature later from exile.)
1/2
Illustrated by Omar Rayyan 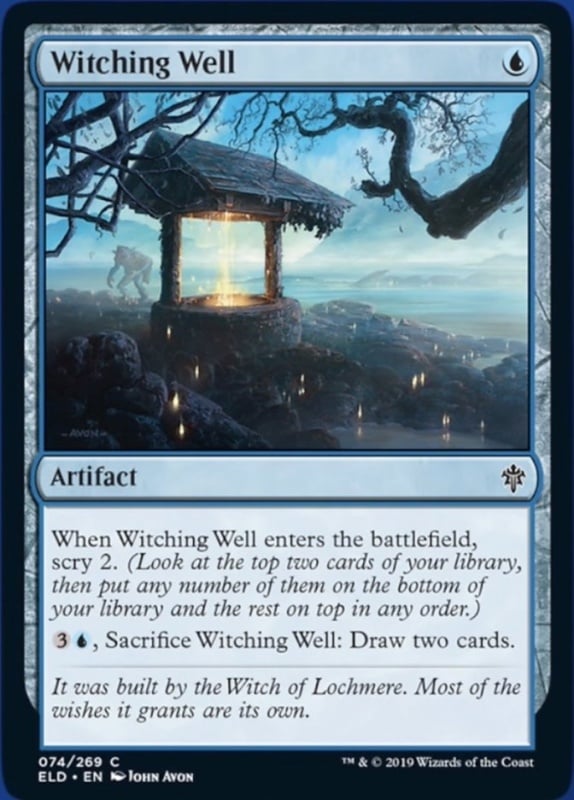 Witching Well {U}
Artifact
When Witching Well enters the battlefield, scry 2. (Look at the top two cards of your library, then put any number of them on the bottom of your library and the rest on the top in any order.)
{3}{U}, Sacrifice Witching Well: Draw two cards.
It was built by the witch of Lochmere. Most of the wishes it grants are its own.
Illustrated by John Avon Crystal Slipper {1}{R}
Artifact — Equipment
Equipped creature gets +1/+0 and has haste.
Equip {1}
“After the death of her mother, Cassia found that things that appear fragile can be very strong indeed.”
—Beyond the Great Henge
Illustrated by Howard Lyon 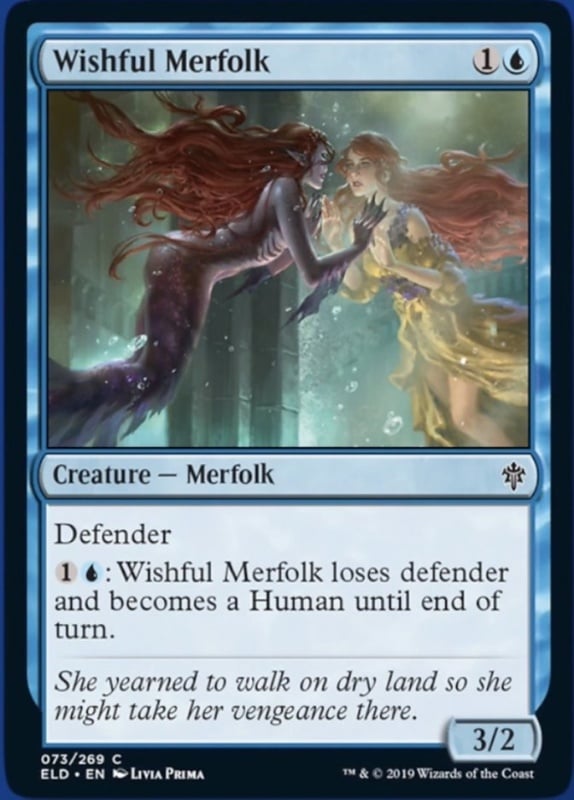 Wishful Merfolk {1}{U}
Creature — Merfolk
Defender
{1}{U}: Wishful Merfolk loses defender and becomes a Human until end of turn.
She yearned to walk on dry land so she might take her vengeance there.
3/2
Illustrated by Livia Prima 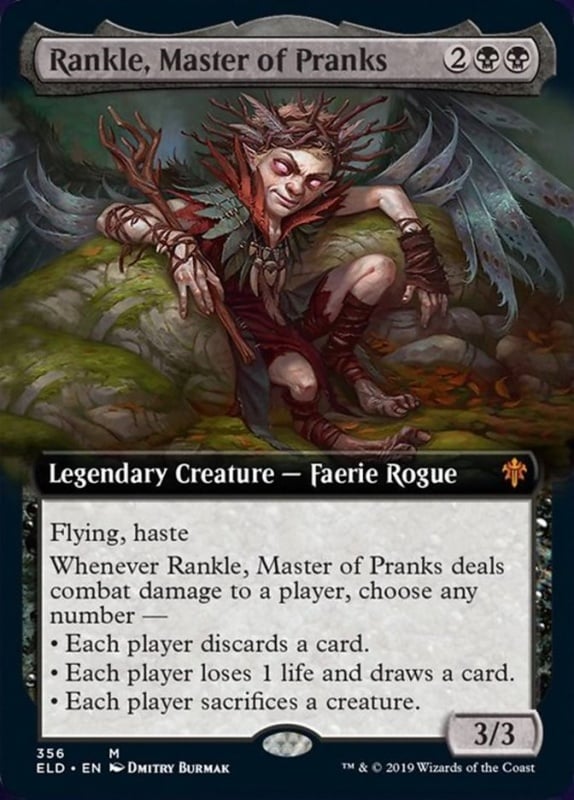 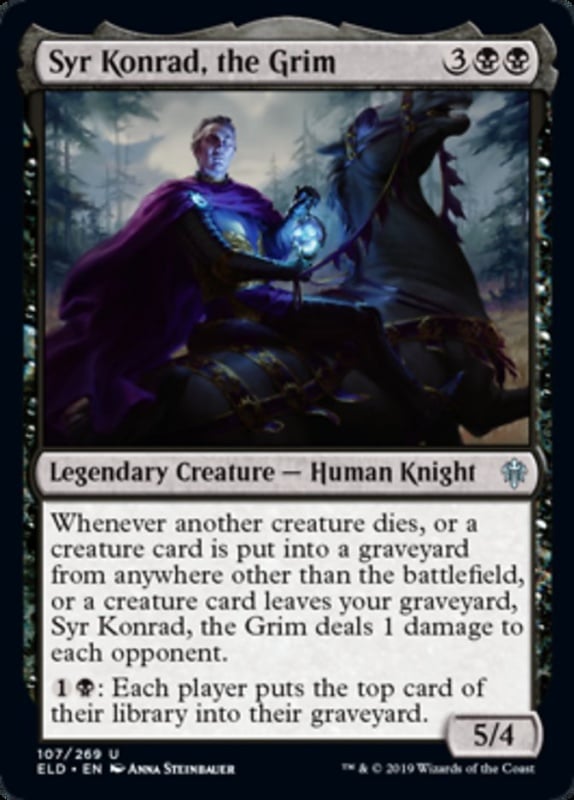 Syr Konrad, the Grim {3}{B}{B}
Legendary Creature — Human Knight
Whenever another creature dies, or a creature card is put into a graveyard from anywhere other than the battlefield, or a creature card leaves your graveyard, Syr Konrad, the Grim deals 1 damage to each opponent.
{1}{B}: Each player puts the top card of their library into their graveyard.
5/4
Illustrated by Anna Steinbauer 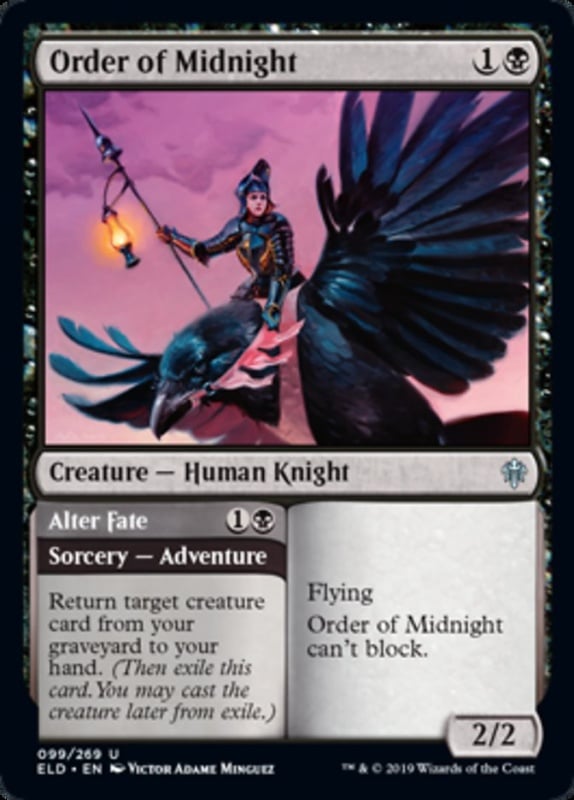 Order of Midnight {1}{B}
Creature — Human Knight
Flying
Order of Midnight can’t block.
Alter Fate {1}{B}
Sorcery — Adventure
Return target creature card from your graveyard to your hand. (Then exile this card. You may cast the creature later from exile.)
2/2
Illustrated by Victor Adame Minguez 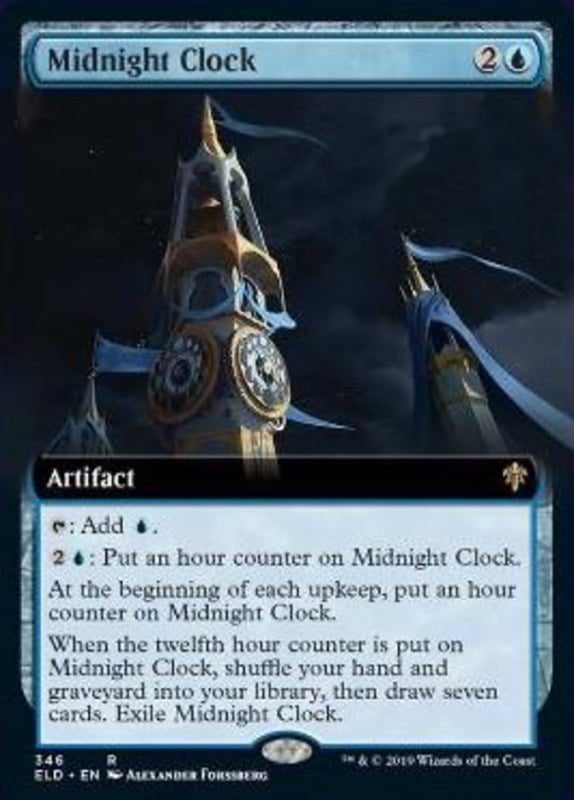 If you’re jonesing for more Magic literature, Throne of Eldraine: The Wildered Quest, by Kate Elliott (The Spiritwalker Trilogy), is out on Kindle, about young warrior-mage twins Rowan and Will Kenrith on a quest for their missing father, the High King.

Of what you have seen from the Throne of Eldraine, what are you looking forward to!

(image: screengrab/Wizards of the Coat)