Movie Sign! Stars of Mystery Science Theater Are Back to Make Fun of Animals 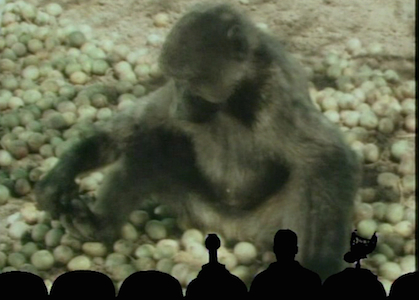 I don’t think Mike Nelson, Kevin Murphy, and Bill Corbett can call themselves Mystery Science Theater guys anymore for legal reasons, but that’s not stopping me. These days they tend to go by a their more recent and entirely laudable efforts as the Rifftrax guys. But if they’re going to be riffing on nature videos for National Geographic, I hold out hope that there will be at least one huge slam on anteaters out of nowhere.

In what Murphy himself assures us is not a prank, their new show Total Riff Off, will debut on April first. It will also conclude on April first, airing a three episode season back to back from 8pm to 11pm. Says Murphy:

We are proud to be on the same network at Neil deGrasse Tyson and “Cosmos.” And now we must BURY HIM in the ratings.

Well, he doesn’t actually expect them to do so, but still he invites all to watch “Killer Shrimp N’ Friends,” “Demon Bat,” and “Guy and a Goose.” If you’re a MST3K fan or a Rifftrax fan, then you know that some of the best comedy they’ve done is when they pick apart deliberately “educational” films, so Total Riff Off should be a sight to see.