It's not what you think it is. 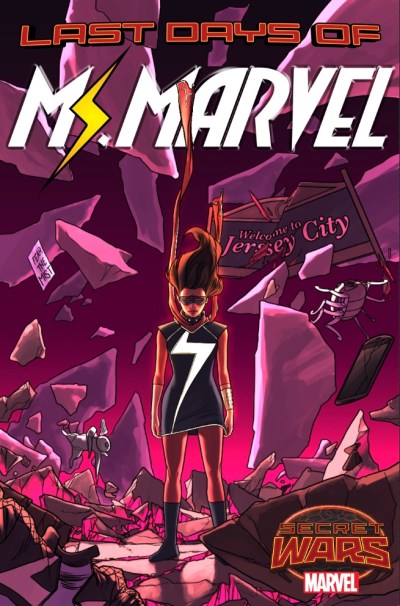 Let’s get this out of the way: don’t worry, excitable Kamala Khan fans. “Last Days” is just the name of an upcoming mini-event specific to the Marvel Universe that will lead in to Secret War, and Ms Marvel isn’t actually going anywhere. Says series writer G. Willon Wilson:

I’m seeing some panic over the Last Days story announcement. No need to fear! It’s the end of the Marvel U, not of Kamala. :)

Now that we’ve all shaken off that initial scare, the vague bit of news from ComicBook.Com‘s exclusive actually has me pretty excited for when the arc begins in June. Kamala Khan is finally off to fight the good fight in New York City, but has to deal with a lot of issues (yup that’s a pun, you’re welcome) to get there.

“She will face a very personal enemy as the chaos in Manhattan spills over into Jersey City, and she will be forced to make some very difficult choices.” Wilson also said. “There will also be a very special guest appearance by a superhero Kamala—and the fans—have been waiting to meet for a long time. The end of the world has never been this exciting.”

Oh god. Is it Carol? I’m so behind, has Kamala met Carol yet? Please let them hang out and have world-ending feelings, okay??