The Most Useful Service for a New Computer 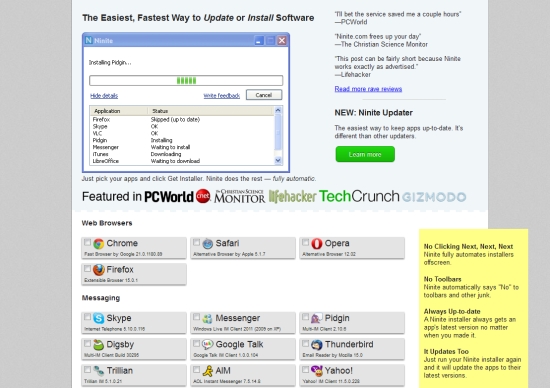 Back Alley Internet is a recurring column in which we explore some of the weirder corners of the Internet and see what we can dredge up for your amusement and education. This week: James gets fed up with post-operating system installation duty, and turns to a free service that makes life so much simpler.

Anyone who has ever gotten a new computer free of pre-loaded bloat knows that, even after the operating system is installed, the drivers updated, and the Internet running smoothly, there’s still a load of work to be done. A computer isn’t exactly useful until you put all the useful items onto it. Even if you’re the kind of user that doesn’t perform the heaviest of workloads, standard operating systems don’t come with enough useful software, and you spend the rest of the day locating and installing all of your preferred programs. Sometimes, if you’re trying out an operating system for the first time, this can be extremely fun — discovering new programs, learning new things — but if you’re reinstalling Windows yet again, you just want to get down to business and stop wasting time. That’s where Ninite comes in, one of the best services you’ll find on the Internet.

When venturing to the Ninite homepage, you’ll be greeted with a bunch of icons of familiar programs, and a grid of check boxes. After marking which programs you’d like to install, the service wraps them all up into a single installer, and makes that installer available for download. The installer will install every single program you checked, without hassle, in one shot. If you use Ninite, you won’t have to go download Chrome or Firefox, then Pidgin or Digsby, then Skype and Thunderbird, then Spotify and Quicktime, then Winamp or iTunes, then Flash, Java, and Silverlight, WinRAR, and so on. It’s all there in one simple package. Ninite even has the foresight to include VLC, otherwise known as “the best video player on the planet and how come you’re not using it if you aren’t?”

On top of the basic software that makes a computer worthwhile, Ninite provides the option of including some bulkier software, such as Internet security and anti-malware programs, and various office suites, such as OpenOffice, Libreoffice, and the trial version of the 2007 iteration of Microsoft Office. The service includes options for the download happy, such as uTorrent and eMule, online storage, like Dropbox and Google Drive, and CD and DVD burning software.

Ninite even knows what’s really important, and provides the option of wrapping Steam up into the package, so you can log back into your favorite free-to-play MMO or team-based shooter right after the installer is finished making your life less tedious. If you were jonesing to get elbow-deep into some indie game development on your brand new high-end rig, don’t worry, Ninite has you covered with developer tools like Python and the Java Development Kit.

Quite possibly best of all, Ninite automatically says “no” to the scourge that is toolbar install requests during the installation process.

If you’re not too thrilled that Ninite missed your favorite piece of software that any computer should have, don’t worry, there’s a handy suggest-a-program form at the bottom of the page.

Currently, there isn’t a Mac version of Ninite, but there’s a Debian-based Linux verison, so Ubuntu qualifies. The list of programs included is a bit small, but you can also suggest a program at the bottom of the Linux page, so help build your Linux package! 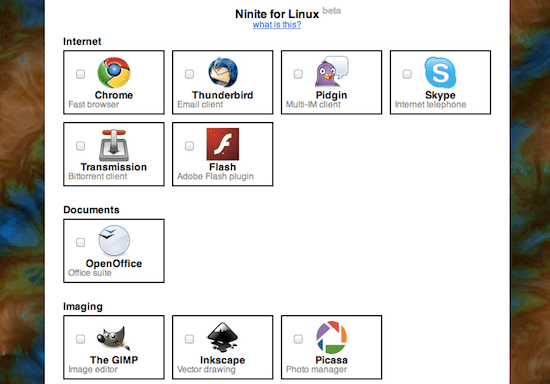 Though the above package creators are free, if you’re willing to shell out a bit of cash, $9.99 per year to be exact, you can snag yourself the Ninite Updater. 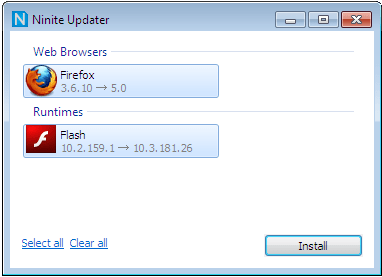 Another extremely handy service, the Ninite Updater does what its namesake suggests, and automatically keeps all of your programs updated to the latest version.

There’s also a Pro version of Ninite, with a price that hinges on how many machines it is used across, because it gives you the option to spread it around. The Pro version also supports a larger list of programs, installs things faster by saving and reusing program downloads, and has a variety of more in-depth options from which to choose.

If this sounds like some kind of commercial, it’s not, this is just coming from someone who spent two straight weeks installing and reinstalling various versions of Windows and Linux on a gaming rig not too long ago, and Ninite made that possible in a shorter amount of time than it would’ve taken without Ninite, and saved what remained of my sanity in the process.

So, if you normally only install Pidgin and Steam after you install Windows, well, aside from the Ninite Updater, the main service won’t help you out too much. However, if you usually have a methodology of installing certain software after your operating system, why not let Ninite do it for you?