Ten of the Most Politically-Charged Comics 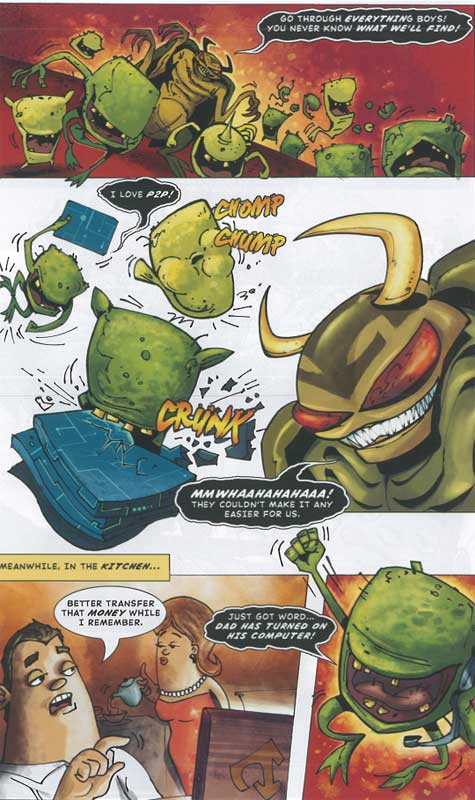 Comics can entertain us, but they can also send us powerful messages about life and society. The latest comic being launched in Mumbai as a part of Mumbai Cyber Safety Week teaches a very valuable lesson: don’t download torrents. Yeah, right.

In Escape from Terror Byte City, (above) boys Jeremy and Ben download a pirated copy of a movie only to find themselves trapped in a virtual city full of scary green blob viruses and spyware with giant fangs.

First of all, it seems odd that, while the comic is admittedly aimed at Cyber Safety, it really touches minimally on the issue of illegality concerning downloads of pirated content. But with a target audience of five through ten year olds, maybe the legal issues would have gone over readers’ heads. Either way, the political message just doesn’t seem to be in the storyline, though the incentive of the comics is clear: don’t let these kids get addicted to torrents.

Just saying: This is the most likely file to get disseminated as a virus-infested torrent ever. It’s as cruel and fun as sending out a spyware-infused movie, but now with overflowing irony!

In honor of the perhaps misguided efforts of the organization behind Terror Byte, we have compiled a list of some comics that were more effectively — and often controversially — political.

V for Vendetta is the ultimate battle between the two extremes of government control: fascism and anarchy. The protagonist, known only as V, is a verdant vigilante with a vengeful veracity who vehemently tries to vassassinate the top political officials of the dystopian British regime. He also plots to blow up Parliament, following in the footsteps of Guy Fawkes. The message of bombastic revolution has resonated with a modern audience, and V for Vendetta lore has become a trademark of several political movements.  Guy Fawkes masks, V’s trademark, were worn in a protest against the Church of Scientology by Project Chanology. Then in a protest last year of the Parliament’s expenses, the protestors dressed up in full V gear and even set off a barrel of gunpowder outside the Parliament building. 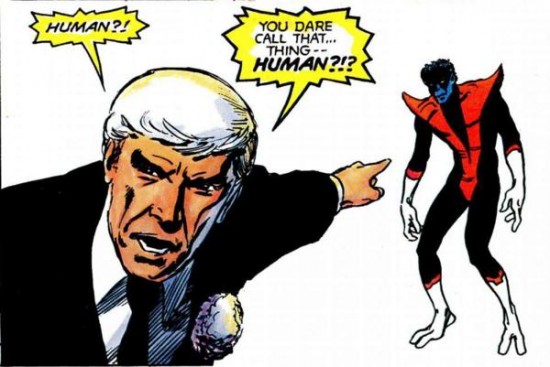 The X-Men have for a long time been said to allegorize the tensions and struggles involved with race relations and civil rights. More than just a ragtag group of superheroes, each embodies the dificulties anyone labeled as “different” can face, often in the extreme. And no storyline since their inception captures that as definitively as “God Loves, Man Kills.” Written by Chris Claremont — the same man responsible for the Dark Phoenix Saga — this powerhouse involves one minister William Stryker stirring anti-mutant hysteria that results in a plot to destroy all of mutantkind. A plot that also has arch-enemy Magneto join forces to stop the threat. This story is also one of the few examples of a classic comic storyline being successfully adapted for the screen. 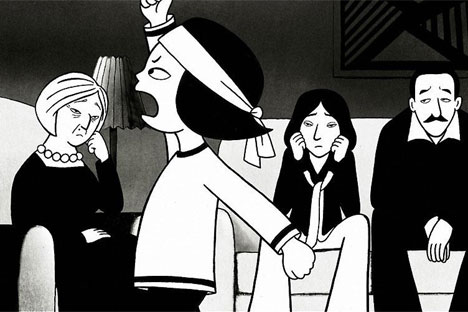 Take the gripping medium of the comic book and center it around a tragic, compelling, and politically relevant true story and you get a phenomenal work. Persepolis is written and illustrated by Marjane Satrapi. The story centers around her experiences in Iran during the nation’s war with Iraq. Marjane is exposed to the restrictive political and religious climate in stages, from wearing a veil to being unable to voice her political views to her family. The comics also highlight the issues inherent in an official theocracy. With the establishment of an Islamic Republic comes the alienation and emigration of several of Marjane’s friends. But the comics are about more than just politics. They look at the positive side of the idea of nationalism. Persepolis looks at what it means to really identify with your home country. It asks what it really means to betray your heritage, but this is a question that not even a comic book can answer. 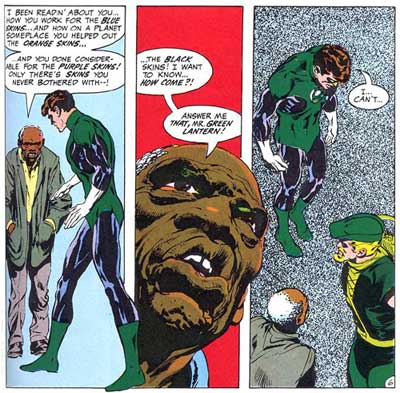 Back in the late 60s, Green Arrow was in need of a change. The whole robin hood thing was getting a little old. So Neal Adams and Dennis O’Neill collaborated on updating Oliver Queen, giving him an edge. And facial hair. Wondering what else they might do with him, they stripped the billionaire playboy with Batman envy of his fortune and gave him a radical bent that made him want to fight for social change. Pairing him with Hal Jordan’s Green Lantern, you now had the recipe for some of the most socially conscious comic books to ever be released under any imprint. Together, the duo set off across America and faced racism, corruption, and most famously drug addiction in the form of a heroin-addicted Speedy, Green Arrow’s sidekick. That storyline earned them a commendation from then-NYC mayor John Lindsay. 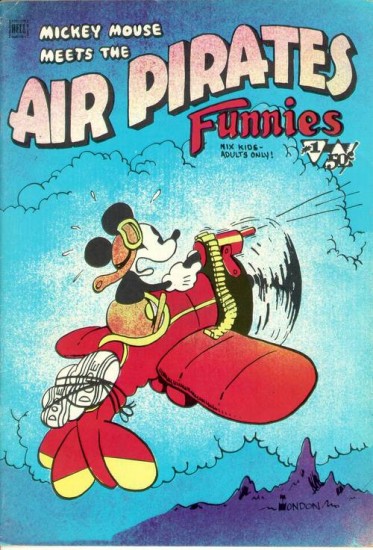 Here, the comic itself is only the tip of the iceberg. Everyone is familiar with Mickey Mouse. And you don’t need to have gone to Disneyland to understand the impact Disney has had on American society. So turning Mickey Mouse into a drug-peddling adventurer/lothario might strike you as surprising. But back in 1971, Dan O’Neill and his fellow underground cartoonists called the Air Pirates did just that, publishing a short series of comics called the Air Pirates Funnies that were a balls-to-the-wall affront on the Mickey image. Disney predictably sued for copyright infringement, trademark infringement, and unfair competition. Exactly what O’Neill wanted, and when he and his fellows were brought to court, he defiantly called his work Fair Use. The case was long in years and money, with O’Neill forming the Mouse Liberation Front, an organization of underground cartoonists, in 1979. By 1980, Disney decided to settle so long there was no more infringement. All this for a mouse in red hot pants. 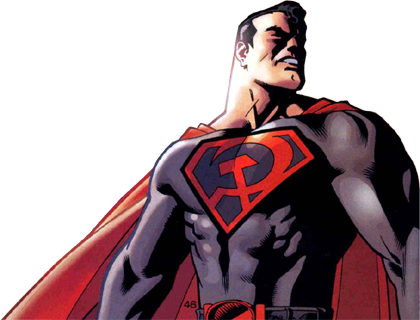 Superman isn’t in Kansas anymore: Red Son explores a world in which Superman fell into the Soviet Union’s lap at the height of the arms race. In this role, he acts as the engine of the Communist war machine, helping the Soviet Union take over most of the world by 2001. But the series doesn’t take an overt anti-communism stance. Superman is a caring hero. He is humanitarian, just trying to help people. He even takes this desire to aid his people so far that he takes control of the communist nation. In the end, Superman ends up in hiding while Lex Luthor takes over the world and leads it into peace. But he does this by implementing many of Superman’s own ideas left over from his communist rule. The messages that really resonate throughout Red Son are diplomacy and freedom. Invasion and enslavement never worked, but even a communist leader can create a prosperous nation. 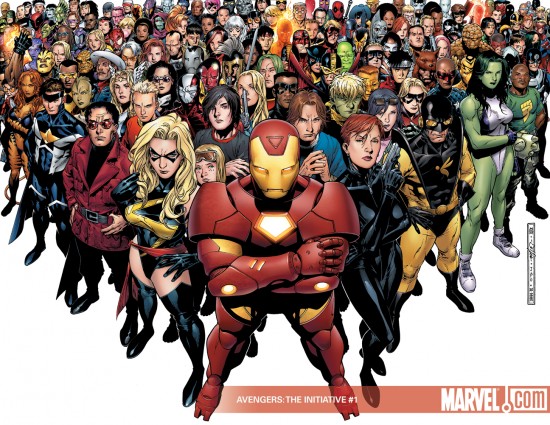 Anyone who’s read comics in the last five years has at least heard of the Marvel Civil War. Headed up by Mark Millar, this event is definitely one that has had lasting ramifications up to the present day in the Marvel universe. After a catastrophe in Stamford, Connecticut, the oft-debated Superhuman Registration Act gains new ground as public opinion of superheroes drops. Support for the act splits the heroes in half between those for it and those against it, and as the action spirals out of control, it clearly becomes an allegory for the divided state of America at the time. And as any massive storyline, its effects reverberate into the future, as we see (highlight text to see spoilers) the death of Captain America, the end of Spider-Man’s marriage, and Norman Osborn taking over the world. Whew! 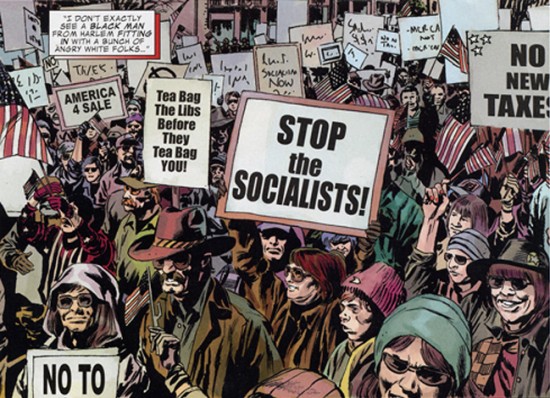 A picture is worth 1,000 words, and in this case, those words are coming from angry Tea Party members. In Captain America and the Falcon: Two Americas, Part One, our two heroes chance upon a protest. The frame in question features a group of nearly if not all white protesters holding signs that read, most notably, “Stop the Socialists” and “Tea Bag The Libs Before They Tea Bag YOU!” The series writer Ed Brubaker told FOXNews that the latter of the two signs was not of his own devising and was added by someone after him in the production process. While Tea Party officials including board member Michael Johns are protesting vehemently against the portrayal, Brubaker claims he never even intended the frame to specifically portray the protesters as Tea Party members. Can’t we all just get along and read some comics? 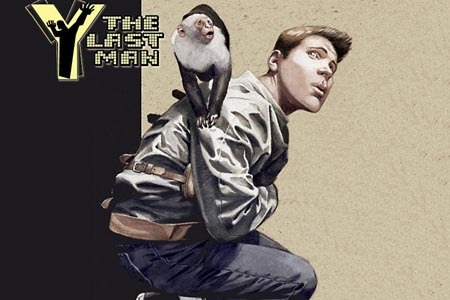 James Brown famously sang, “It’s a man’s world.” And then there were no men. Y: The Last Man, a series done by Brian K. Vaughan and Pia Guerra, explores what would happen if every male mammal on the planet save for a man and his monkey were wiped out. Well, naturally, shit goes crazy. The award-winning series deals with Yorick Brown as the last man on Earth, accompanied by his Capuchin monkey Ampersand, surviving in a manless world as the women left on the planet deal with their own survivors’ guilt and the possibility of they being wiped out as well. 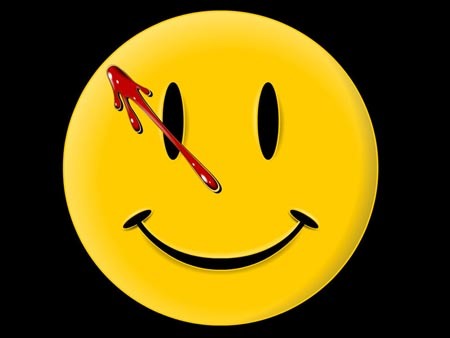 In the late first or early second century, Roman satirist Juvenal wrote “Quis custodiet ipsos custodes?” You may know this quote better in its common English translation, “Who watches the watchmen?” Alan Moore, after his foray into the detailed, divergent narrative with V for Vendetta, wrote Watchmen as an attack on the complacency and comfort of many Reagan supporters.  In 1986, Moore stated, “At the moment a certain part of Reagan’s America isn’t scared. They think they’re invulnerable.” Watchmen didn’t just make us question the amount of faith we put in our heroes, it made us question the idea of the hero. And that idea of the hero could apply to anymore from the man on the street to the President of the United States.