In Lack of Representation News: Less Than 5% of TV Writers Are Black & Half of Latinx Characters Are Criminals 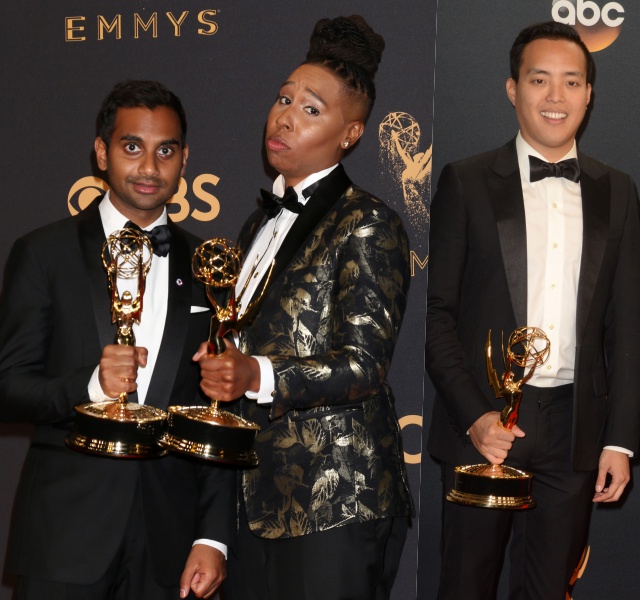 The 2017 Emmy season was an important one in terms of highlighting the accomplishments of women and people of color in the entertainment industry. Two first wins, and the first win in a category for a black actor in almost twenty years. It looked really promising (via Entertainment Weekly):

Master of None‘s Lena Waithe made history by being the first black woman to win a writing Emmy, while Atlanta‘s Donald Glover is the first black director to win an Emmy for directing a comedy series. This Is Us star Sterling K. Brown became the first black actor to win the Outstanding Lead Actor in a Drama Series award since 1998, when Andre Braugher won for his performance on NBC’s Homicide: Life on the Street.

However, these wins should not be taken as a sign that inclusion on all levels is the new norm in the land of television. A recent study, done by the organization Color of Change, found that in television writing rooms, less than 5% of writers are black, as reported by The Hollywood Reporter:

The report examined 234 broadcast, cable and streaming scripted series from the 2016-17 season and found that two-thirds of the shows had no black writers in their rooms. In all, black writers accounted for just 4.8 percent of the 3,817 staffed scribes.

Those writers were predominantly staffed on shows led by black showrunners, who represented just 5.1 percent of the pool. Two-thirds of those series had five or more black writers in their rooms, although all had multiple white writers as well. By contrast, 69.1 percent of white-led writers rooms had no black writers at all.

No Hulu series employed a black writer, while every show on AMC, Showtime and TBS had zero or just one black writer, as did 23 of 25 CBS series and 14 of 15 CW series.

As a result, the depictions of blackness on television varies depending on both the number of writers and the influence they have on shaping a narrative. Having one diversity hire does little if they are treated as just a brownie point for the organization. The same can be true for any other ethnicity.

Latinx characters in the media have been overwhelmingly depicted as having some ties to criminal activity, drugs, and sex work especially. In Hollywood Reporter exclusive, they spoke about an organization—Define American, an immigration nonprofit founded by Jose Antonio Vargas—that released its first-ever media reference guide for writers, director, and producers based on the depictions of immigrants in the media, an issue that is very much a concern for Latinx characters.

That report found that immigrants were underrepresented with just 6 percent of roles in the sampling (while comprising 17 percent of the U.S. population). However, they are overrepresented as criminals, with half of Latino and a quarter of Middle Eastern immigrant characters shown engaging in criminal activity. In real life, U.S. census and American Community Survey data has found that immigrant males between the ages of 18 and 39 are approximately half as likely to be incarcerated as their native-born counterparts.

Thankfully, there are Latinx people in Hollywood that are working to fix these narratives. Gina Rodriquez is currently working on a project with CBS called Have Mercy, which is about “a Latina doctor unable to practice when she immigrates to Miami, who begins work as a nurse’s assistant, but risks everything when she opens a makeshift clinic in her apartment to serve the community.”

It’s no surprise that the people who are making the best media for POC are POC. While there have been milestones made in the black community, it does not erase the fact that the Latinx, Native, and Asian communities also deal with the same representation issues. There has never been a Native sitcom on mainstream television; Red Road tried, but it was never successful. Fresh off the Boat, The Mindy Project, and Master of None have made huge strides in the Asian communities. Jane the Virgin and the Latina-led Superstore have been powerhouses since the beginning, but it’s not nearly enough. We need diversity at every level of the industry before we truly have anything to celebrate.

I leave you all with this video: