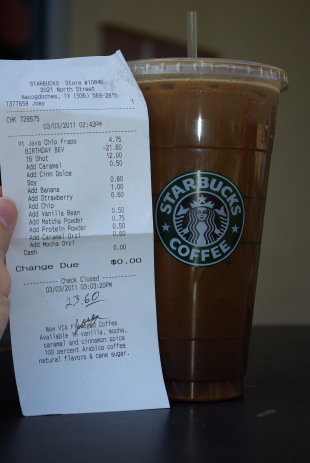 You’ve probably never walked into a Starbucks and thought to yourself “How can I order the most expensive coffee possible?” Logan A. Warren, on the other hand, has. On top of that, he actually ordered it. It doesn’t seem like it would be that hard; you just scan the options and pick the priciest one, right? Not so, you can purchase all sorts of upgrades for your coffee, each at extra cost. That’s how Warren wound up paying $23.60 for a single coffee, and one that was practically undrinkable at that.

So here’s the recipe he came up with, after consulting with a barista for about half an hour:

Now that’s a coffee that’d wake you up, right? Wrong. More accurately it would probably kick your face off and put you in a hospital, faceless. The monster contained around 1400 mg or almost a gram and a half of caffeine. That’s like drinking 14 16oz cups of McDonalds coffees at once. It’s like shotgunning 28 Mountain Dews or chugging 7 Five Hour Energies. It’s far from healthy.

To boot, Warren says it didn’t even taste that great. He put it this way on Coffee and Computers:

“The flavor?  Tolerable, but not good.  Imagine a coffee-based health food smoothie that will put you in the hospital if you drink it all.  That’s how it tastes…like Jillian Michaels with a touch of Chuck Norris.”

All that being said, there are some things you have to do just so that they can have been done. This is one of those things. I applaud you Mr. Warren for your contribution to absurd science by sampling that awful concoction, especially after adding all those other things to it. 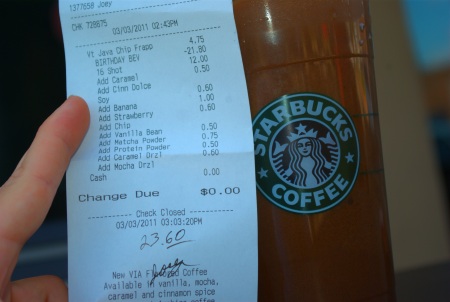 (Coffee and Computers via Neatorama, caffeine stats via Mayo Clinic)