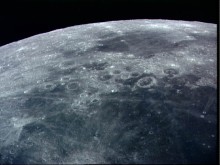 Last year, NASA crashed a rocket into Cabeus, a crater on the dark side of the moon, in an effort to see how much water these is on the moon. The results of that test are in, and they’re promising enough that NASA or some other space exploration agency may consider building a lunar base as a stopover point for missions deeper into space.

The National Aeronautics and Space Administration crashed the Centaur rocket into a crater called Cabeus, kicking up about two tons of material estimated to contain 5.6 percent water, according to reports in the journal Science. That’s more water by mass than in the Sahara desert, which has 2 to 3 percent.

There may be sufficient water to separate into its component parts, hydrogen and oxygen, and use the hydrogen for rocket fuel, said Anthony Colaprete, a planetary scientist for NASA at the Ames Research Laboratory in California and an author of three of the papers. That could mean the moon would be useful as a launching point for missions to other destinations, such as a moon of Saturn or Jupiter.

“We didn’t know the moon after all,” said Peter Schultz, a planetary geologist at Brown University in Providence, Rhode Island and author of two of the papers, in a telephone interview. “It’s like there was a different face and it was hidden in a treasure trove.”

Much more detailed analysis of the Cabeus findings at Universe Today.