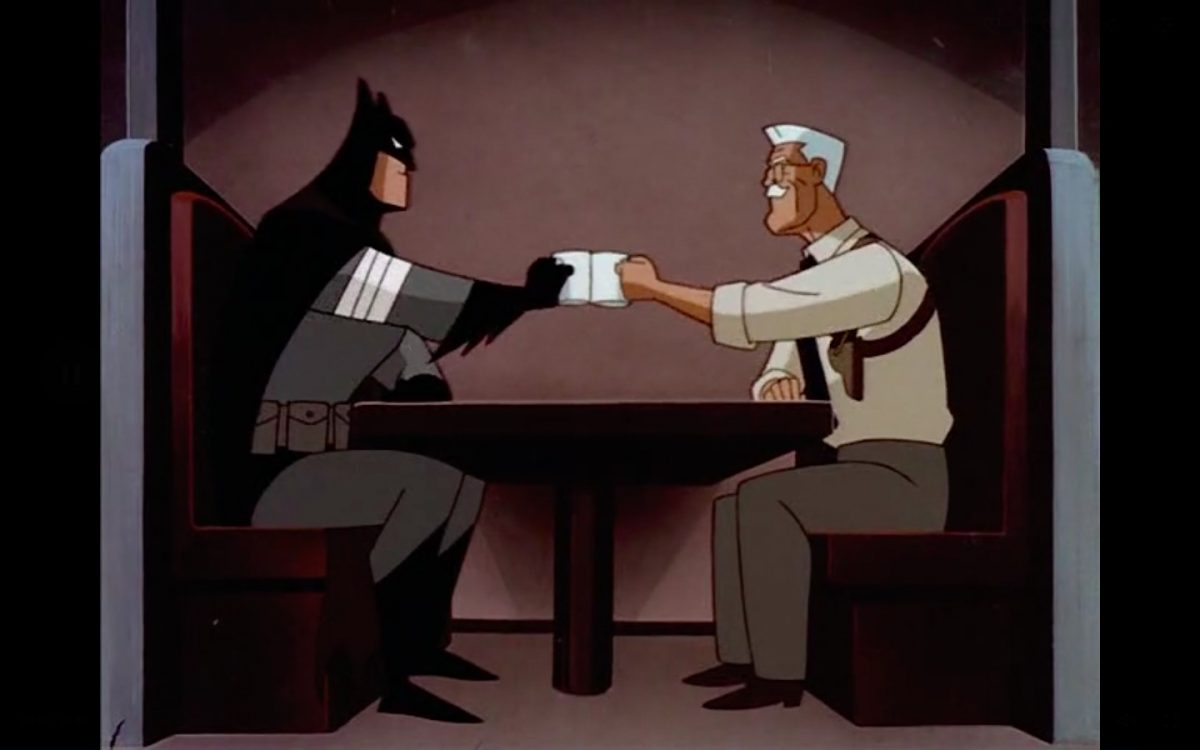 Full disclosure: I work in a coffee shop. There’s some credence to the idea that building rapport with customers, especially regulars, is one of the best parts of the job. Seeing the same people everyday, learning their orders, and being able to make them smile by having their small drip coffee ready at the register when they reach the head of the line is kind of special. You learn about their lives, and they learn about yours, and the cafe becomes a microcosm of the neighborhood.

I’ve had two major career goals in my life: becoming a writer and working at a coffee shop. If you’re laughing, that’s cool; I get why that seems kind of silly (on both counts). The truth is, having grown up in fandom, I’ve spent a decent amount of time reading fanfiction for my favorite fandoms. Since not every TV show, book, movie, or comic has a built-in coffee shop setting like Friends or Gilmore Girls, recreating these worlds in “coffee shop AUs” (alternate universes where the same characters and situations play out in an entirely different physical setting and/or time—in this case, coffee shops) has become an integral part of fandom and fanfiction.

Coffee shop AUs are one of the pillars of a fanfiction community, to be quite frank. Every time I dive into a new fandom, one of the first things I look for is the token coffee shop AU. Usually, I find several; that’s how I know I’m going to be in a fandom for the long-haul. Reading coffee shop AUs as a young person convinced me of something that turned out not to be true for me, but has definitely proven to be true for people I work with: true love can always be found in a coffee shop.

My spouse and I didn’t meet in a coffee shop, but we have both worked in coffee shops. Pursuing a writing career while simultaneously punching in and out at the cafe four times a week feels exactly like the life I envisioned when I was younger; the only difference is that I’m not flirting with customers or hoping to see the Cute Regular Who May Or May Not Be Into Me, because I’m already married. Remarkably, working in coffee hasn’t at all dimmed my love of coffee shop AUs—if anything, it’s only increased since I learned how truly hectic this job can be.

Some of my favorite coffee shop AUs stand out because they seem so normal in the grand scheme of the fandom. Draco Malfoy working in a muggle coffee shop after the war, for example, stands out because it’s hilarious to imagine Draco Malfoy as an everyday muggle barista. Clarke Griffin having a kid with her platonic life partner, Wells Jaha, but falling for the new regular at her coffee shop and creating a new kind of unconventional family with that regular’s friend and ex-girlfriend fits the themes of The 100, but with the added bonus of coffee and a cute kid.

Coffee shop AUs create interesting spaces to explore social issues (like blended families, in that The 100 fic), romance, and more. There’s even a coffee shop AU for Mad Max: Fury Road, in which Max works at a coffee shop while he learns to cope with PTSD, and Furiosa runs a mechanic shop and a shelter for abused women.

Luckily, as fanfiction becomes more mainstream, and as writers who started flexing their imaginations in fandom when they were younger start to produce novels, TV shows, comics, and more, coffee shop AUs are becoming pretty popular. In fact, they’ve become the actual setting for stories, rather than fodder for alternate universe fanfiction. I’m not just talking about the infamous orgasm scene from When Harry Met Sally, though I’ve read that scene reenacted in fanfiction and cackled with absolute glee. My favorite new comic series takes place primarily in a coffee shop, which honestly adds to the list of reasons why I love it so much. 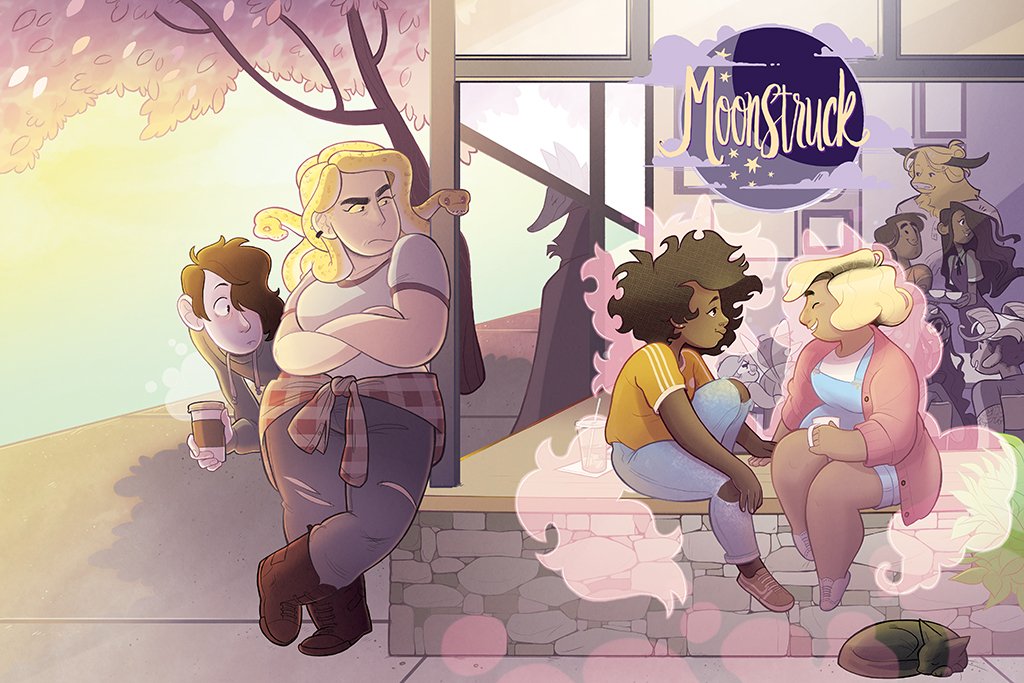 Moonstruck is a humorous, monstrous, LGBTQ romance comic by writer Grace Ellis, artist Shae Beagle, colorist Caitlin Quirk and editor Laurenn McCubbin. Published through Image Comics, this series follows fat werewolf Julie as she experiences the magic of falling in love with her new girlfriend, all while her best friend Chet, a non-binary centaur with a crush on one of their customers, deals with magic of a more sinister kind. Julie and Chet work together at a coffee shop, where their best-friends-and-coworkers routine is sometimes interrupted when one of them catches Feelings.

The comic is stupendous. It’s a delightful script with whimsical illustrations, perfect pacing, vibrant colors, and so much positive representation on the page that the first time I picked up an issue, I cried a little. Moonstruck is funny, even when it takes a dip into darker subjects, and the characters live and breathe on the page.

Their friendships and romantic interests are given equal and necessary attention, and the world the creators have built obviously extends beyond the page; I want to know everything about everyone in this little town, and I already know that they have lives beyond what we see, which is incredible. Too often, especially with such simple-on-the-surface stories, depth of world-building is extremely lacking.

In a 2017 interview with Jameson Hampton at Rogues Portal, Ellis said the drive for setting Moonstruck in a coffee shop was to take fantastical elements and put them somewhere normal: “It was important that the story take place somewhere that was immediately recognizable and familiar, and I mostly write at coffee shops, so it seemed like a natural setting.”

Coffee shops create a wealth of people-watching opportunities; as someone who works in the cafe, both on my laptop and behind the counter making beverages, I firmly believe that coffee shops create the largest possible cross-section of people to inspire fictional stories. Coffee shops—especially small, local ones—are spaces where people can quickly become familiar, but even if they don’t, they can still stick in your mind for days, weeks, months, and even years at a time.

Of course, that doesn’t mean people who write stories set in coffee shops are afraid of using even more familiar settings—like corporate coffee chains, for example. Oftentimes, coffee shop AUs take place at Starbucks, I think because the chain represents a universal coffee shop experience, at least to most people. Rainbow Rowell’s best-selling novel Fangirl features one character who works at Starbucks, and when the main character mocks him for it, he replies with a snappy quip about needing health insurance. It’s a quick, grounded-in-reality moment that has been with me ever since I first read the book last year.

The best part of Fangirl is that the entire book follows Cath as she navigates her first year of college and writes the penultimate fanfiction of her fandom career. Rowell has gone on-record saying that she wrote her first three books at the same Starbucks; much like Ellis, she took the setting and incorporated it into her book. However, there’s something particularly on-the-nose about a book that explores fanfiction taking place, at least partially, in a coffee shop.

There are, of course, several other books that follow this theme that I have yet to read: The Espressologist, by Kristina Springer, reimagines Jane Austen’s Emma to take place in a modern, hip coffee shop, where main character Jane Turner plays matchmaker with her friends based on their coffee orders. My Lost and Found Life, by Melodie Bowsher, follows a young woman named Ashley, who survives the disappearance of her mother (who allegedly embezzled millions before ghosting) by taking a job in a quirky San Francisco coffee shop. Confessions of a Triple Shot Betty, by Jody Gehrman, follows Genna, Amber, and Hero through a summer working together at the same coffee shop, in a story of mistaken identities, romance, rivalry, and girl-bonding.

There is always, always more room for coffee shop AUs in fandom, and the world at large. If you have suggestions for where I can take my coffee-loving, hopeless romantic attentions to next, I’m all in.