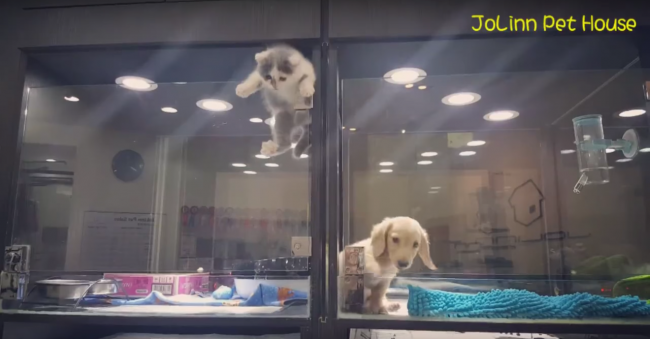 Look: I know you more than likely clicked on this post the moment you saw “Kitty” in the headline. That’s totally cool, I’d do the same exact thing. But let me break down what you’re getting here.

So this kitten in a pet shop is totally not feeling his cage, right? He’s bored, kind of tired with the little box bed he’s got in the back, and so he looks over and notices there’s a puppy (a puppy!) in the cage next to his. He gets up and he’s like, “Man, I want to go play with that puppy,” you know, as you do, so he plans this totally elaborate heist-style plot to escape his cage and play with his puppy pal.

Of course, by elaborate heist-style escape, I actually mean he’s going to squeeze his fuzzy, pudgy little kitty body through the gaps in the cages to go over to his pal’s place. It’s not the most graceful thing ever, but it totally gets the job done, am I right?

What’s even more funny is that the puppy is like, so bored until it notices that his kitten friend is coming over. Oh, man, he looks over and it’s like, over, that puppy is down. To. Play. He’s hopping around, and really, he doesn’t exactly help with the escape more than he just sorta stands there and licks the kitty, nipping at him a little bit in some kind of token gesture of assistance.