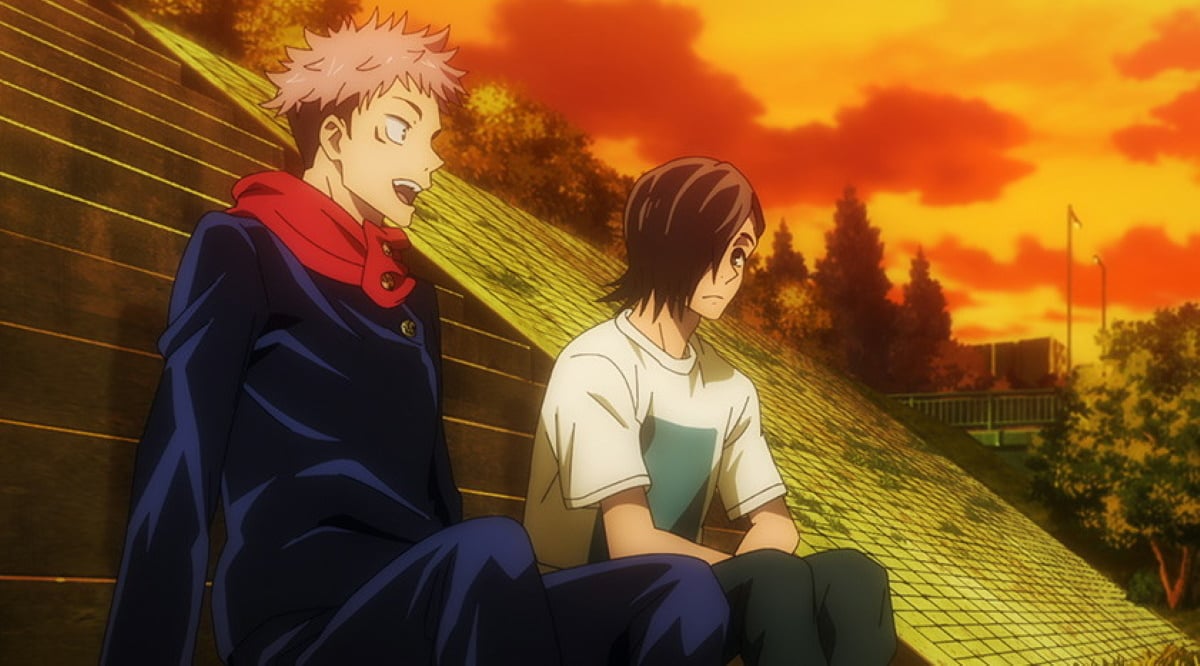 Welcome to the Monday Anime Round-up, a weekly series where I talk about the anime I watched over the weekend. Um. hopefully weekly. Assuming I can update this more often than I update my fics (I’m sorry!)

This will, most likely, be currently airing series, but there’s always room for me to catch up on the other 3.14159~ shows I’ve been neglecting. There will be spoilers for each series I talk about as I will be talking about recently aired episodes. That being said, I’ll recap any relevant information if I feel the need to, but for the most part, I’m just diving into the episode. 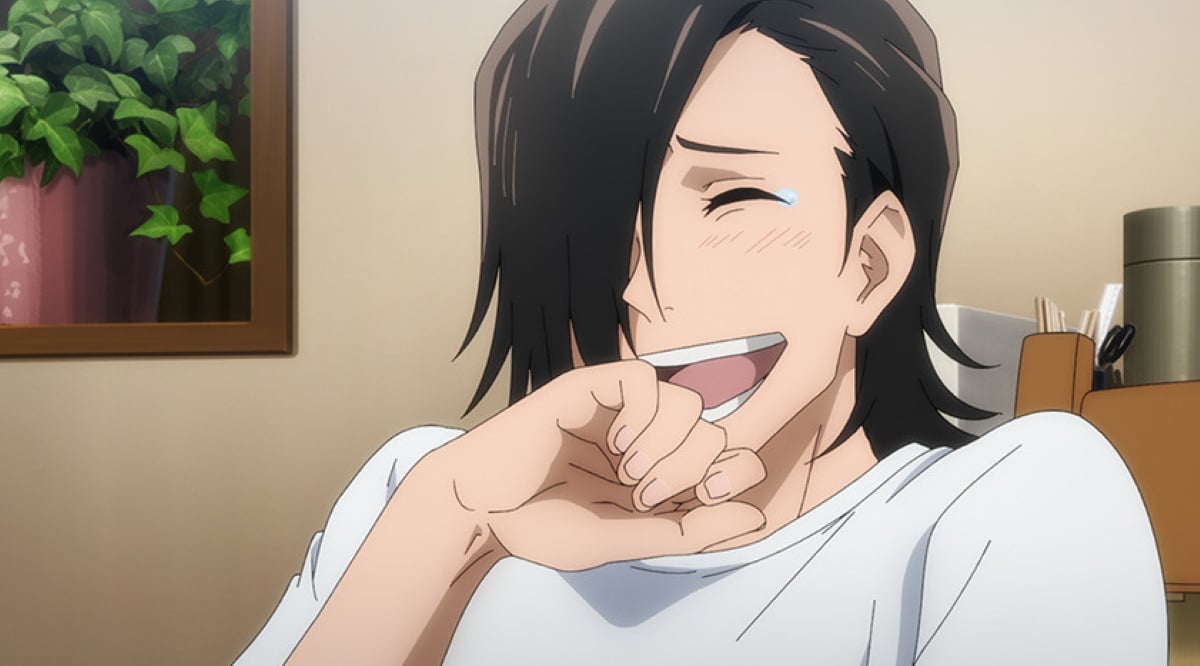 Extra note: This episode is subtitled as the dub just started airing recently and is behind. Jujutsu Kaisen episodes will be based on the subtitled version for the time being, but I may go in and recap the dub too!

Nanami continues his battle against Mahito, now going into overtime. Mahito, who clearly hasn’t watched enough anime, doesn’t realize that overtime isn’t some cheeky expression and that Nanami was holding his power back. Like damn, Mahito, don’t you know when the salaryman loosens his tie that shit’s about to go down?

Nanami manages to take Mahito off guard and crush him with falling debris, leaving the scene, but we soon learn that Mahito was able to survive when we see him slip past the rubble in a new form that’s certainly a choice. This is because as long as his soul is intact, it doesn’t matter what happens to his body, which means he’s gonna be pretty hard to kill.

Meanwhile, Itadori is tasked with talking to Yoshino and asking about the gruesome murders he witnessed at the movie theater. Yoshino, of course, says that he didn’t see who did it, covering for his new friend who, most assuredly, is NOT a friend (I don’t trust Mahito I don’t I don’t I don’t!) To ease the tension, and because Itadori continues to be the goodest boy, he asks Yoshino about the movie he was watching. To Yoshino’s surprise, he and Itadori have similar tastes in movies, and even have similar ideas about movies that have too many sequels. It surprises Yoshino’s mother, too, who walks by and sees her normally apathetic, severely bullied son actually enjoying himself with someone else.  She invites Itadori over for dinner, activating the friendship social link between the two boys.

After dinner, Itadori and Yoshino talk about the whole cursed objects/demonic creatures/supernatural world they’ve been thrust into. Since Itadori is training to be a Jujutsu Sorcerer, Yoshino asks if he’s ever killed anyone. Itadori hasn’t, and he doesn’t plan on it, not wanting to introduce the concept of killing into his life. Ugh, who’s gonna tell this sweet boy that he’s the protag in a supernatural anime and he’ll, most definitely, have to kill someone?

Despite Yoshino’s grim outlook on life, it seems that Itadori is getting through to him a little bit.

Until Yoshino’s mother is killed that evening.

And Mahito says it’s because someone planted a cursed object (one of Sukuna’s fingers) in the house.

No, Mahito didn’t plant it, silly, why would you think that? (I’m kidding he and Geto are in on it, lol, they’re the antagonists, duh)

Itadori wants to help, but Nanami officially becomes one of my fave anime adults of 2020, telling Itadori that there’s nothing wrong with REMAINING A CHILD and, you know, NOT getting mixed up in a world where he will DEFINITELY HAVE TO KILL PEOPLE. Just. More adults telling kids to stay kids, please! For now, it’s enough for Itadori to watch Yoshino… at least it would be if Yoshino weren’t on a revenge quest where thanks to Mahito’s manipulation he thinks one of his bullies is the one who planted the cursed object in his house. Itadori shows up in time to see Yoshino beating the shit out of his bully, and now the two new friends gotta fight.

Insert absolute bop of an ending theme here because that’s where the episode ends. Son of a bit- 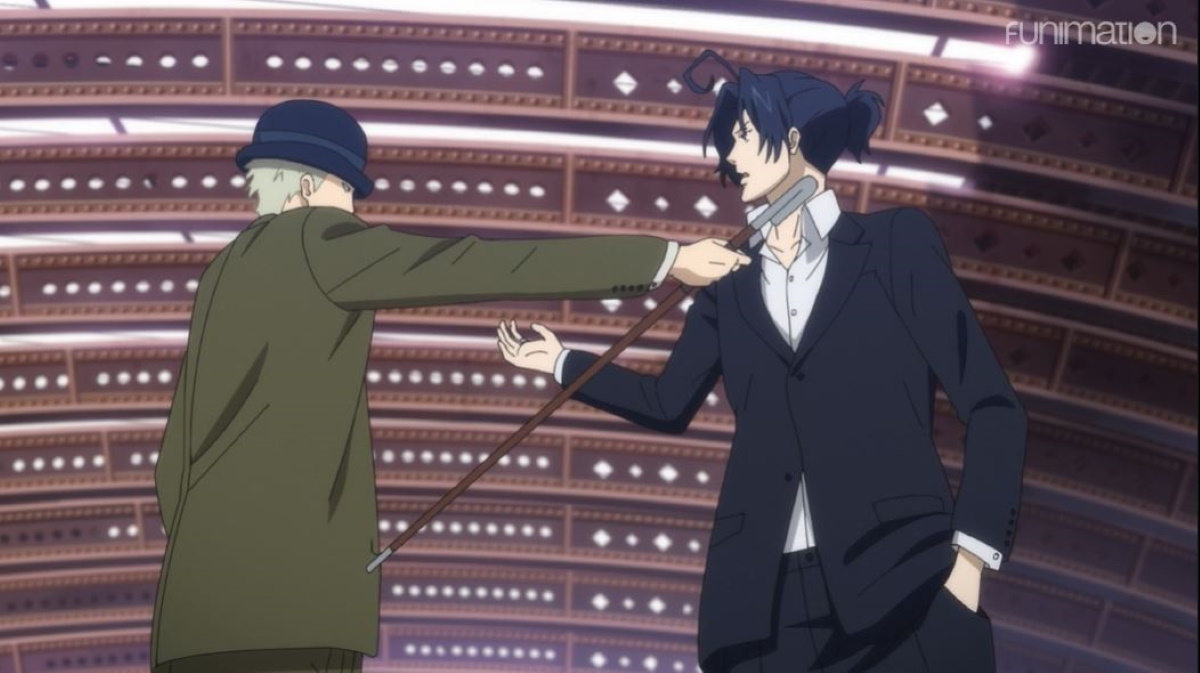 The episode opens in what looks like a recap of what happened in the previous episode. Holmes and Watson are facing down Jefferson Hope, the man behind Count Drebber’s murder… or so they think. Ok he did kill the Count, but technically there’s a man (Moriarty!) behind the scenes (Moriarty!!) who Hope says will be revealed (Moriarty!!!) if Holmes kills him. Of course, Holmes shoots Hope to find out the truth.

What do you mean that’s not how it happened?

Ah, I’m kidding, of course it didn’t, Holmes was just having a nightmare where he actually took the offer and killed Hope instead of arresting him. Still, this nightmare haunts him since he has no idea who the real mastermind is. Also, thanks to his work on the Drebber case, he’s been flooded with dull cases that don’t excite him nearly as much as the Drebber case did (which… Lestrade was supposed to get the credit so Holmes could go about his business, what gives?) It gets so stressful that he attempts to find some kind of clue when news of another dead aristocrat surfaces. Unfortunately, it really does look like he died from health complications and not murder. Sigh, where have all the insidious cases gone?

On the way back to the train to get home, Holmes and Watson have what could only be called a marital dispute (to the point that Holmes, later, asks if Watson is a woman because Watson gets so fed up with his shit that he locks him out of their shared train car). Holmes might be in the metaphorical dog house, but lucky for him William and Louis are on the train for him to go and bother.

I’m not kidding when I say that Holmes looks like a schoolboy with a crush when he runs over to their table, sits down, uninvited, and interrupts their lunch. He is CLEARLY enamored with William James Moriarty, so much so that he accuses him of being the mastermind! The two share a good laugh and continue to … I’m just gonna call it what it is, they’re mentally banging each other. Holmes confirms as much when a dead body is found on the train and he challenges Moriarty to A GAME to see who can find the culprit the fastest.

Except … well … Watson shows up with blood on his coat, insinuating that he was involved with the murder.

Hi there, cliffhanger, yeah, cue the bright, colorful ending theme of the series. 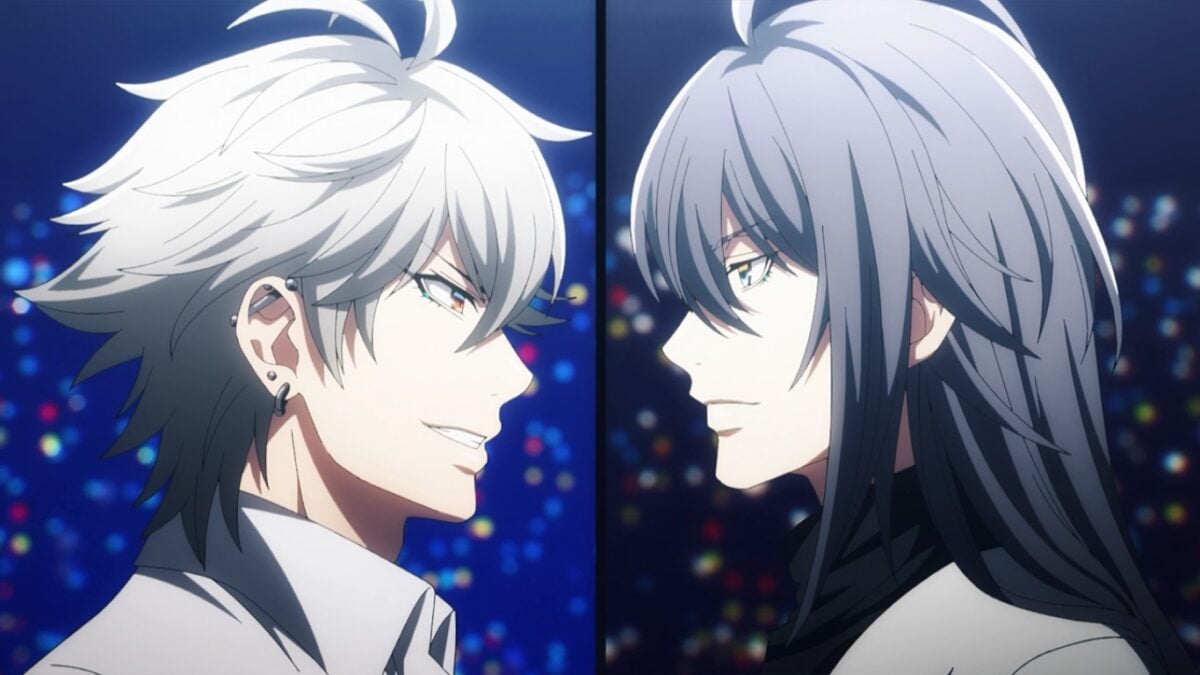 After my boy Doppo KILLED it last week (I’m so proud of you!!!) Ramuda accepts defeat, which means that he’s going to die. Probably? He, at least, thinks so, since he failed to use the uber toxic hypnosis mic in the match against the good doctor, Jakurai. Ramuda plans on leaving so he doesn’t endanger his teammates, but he realizes that his team purposely stopped him from using the super toxic dangerous totally has a poison symbol engraved on it microphone, instead encouraging him to be his true self in battle. Ramuda then decides to tell his teammates that they should all leave together, right now. Of course, he doesn’t tell them that the Party of Words is gonna be hunting him down for betraying them.

Anyway, that’s enough of team bubblegum pop, now it’s time for the final match between Mad Trigger Crew and Matenro! The leaders of both crews take a moment to talk to one another since they have history. It hasn’t been fully explained, and if you were hoping this would be the episode that did it I have some bad news for you. We still don’t know the deal between the leaders of the competing crews, what’s going on with Samatoki’s sister, why Ramuda even agreed to work with the Party of Words, just… nothing. What we do know is that Jakurai believes in his new crew and they all continue to uplift each other and embrace each other’s strengths and weaknesses. This is demonstrated in battle when Matenro wins the entire competition!

No idea, but we’ll hopefully find out in the next episode! 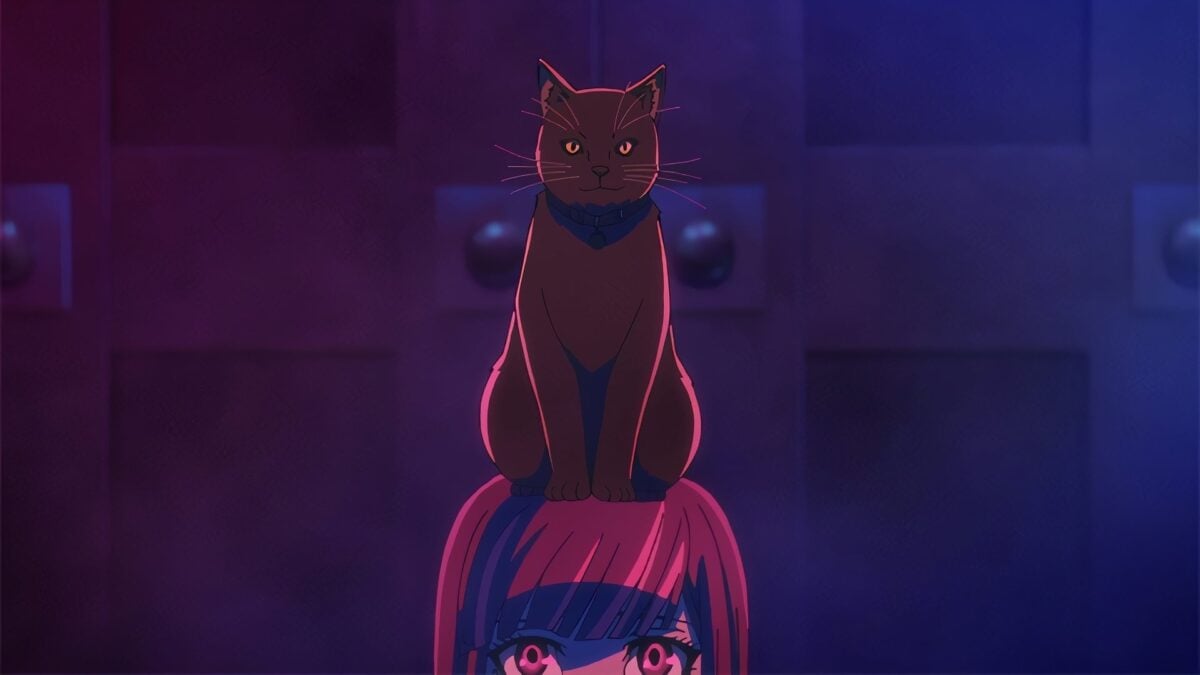 She did it all for the kitty.

Extra note: Very mild spoilers if you don’t want to know ANYTHING going in

I gave the first episode of this series a shot and it’s entertaining as hell! From what I can gather, Akudama are high ranking criminals, so instead of character names, we get criminal titles. The four main ones are Courier, Brawler, Doctor, and Hacker, and the four are sent on a job to break out a dangerous Akudama known as Cutthroat. Along the way, a normal girl gets mixed up in the chaos along with another criminal who isn’t as high ranking (Hoodlum). In order to have her life spared when she’s cornered by the Akudama (seriously, y’all, all she wants to do is save this kitty cat) the girl says that she’s Swindler, a criminal not on any of the list because she’s managed to outsmart the system.

The group who isn’t really a group because they’d all kill each other if they could manage to free Cutthroat, who Courier delivers a briefcase to… because he’s Courier and he delivers packages. The suitcase has explosive collars in it, and suddenly we get a little Suicide Squad-y because Cutthroat puts collars on everyone. Before you can scream WHAT THE HELL IS GOING ON the cat the innocent girl was trying to save… talks.

Because the cat brought them all together.

Because of course it did.

This series looks to air on Thursdays and I still have to catch up, so I’ll try to return to this later!

That’s it for your Monday Round-up! Who else is watching these series? What anime are you watching over the weekend?