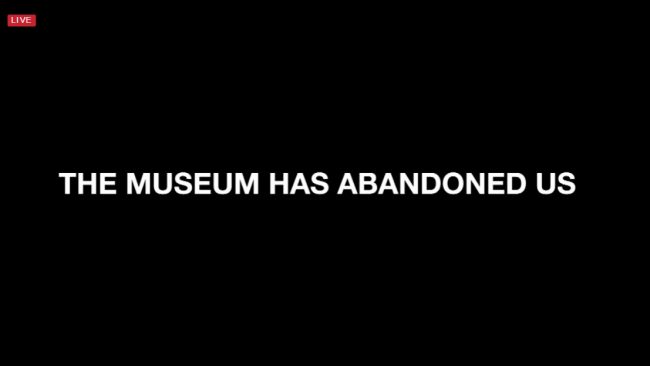 For nearly three weeks, LaBeouf, Rönkkö & Turner’s He Will Not Divide Us installation has allowed everyone access to a livestream running 24-hours-a-day, 7-days-a-week broadcasting from outside the Museum of the Moving Image in New York. Passersby were encouraged to look into the camera and repeat the phrase “he will not divide us” as often as they wished (in any way they liked) in protest of our current President’s administration. That installation is no more.

The MOMI has decided to shut down the installation claiming safety concerns after several people, including LaBeouf, were arrested after violent altercations. LaBeouf shoved a guy who said “Hitler did nothing wrong” after pulling him in for what at first appeared to be camera time with a fan. He shoved him, and then backed away and crossed the street as the victim of the shove said “Why’d he attack me?” This was on January 26th.

Then, on what appears to be later that evening, LaBeouf was arrested on the livestream, apparently for allegedly “attacking a neo-Nazi.”

As a He Will Not Divide Us Twitter fan account pointed out, “For those of you who don’t know what happened. Shia was attacked by a nazi. Shia got arrested. Nazi got away.”

Today, the Museum of the Moving Image has decided to shut down the installation. According to IndieWire, the MOMI had this to say in a statement:

“The installation created a serious and ongoing public safety hazard for the Museum, its visitors, staff, local residents, and businesses. “While the installation began constructively, it deteriorated markedly after one of the artists was arrested on the site of the installation and ultimately necessitated this action. Over the course of the installation, there have been dozens of threats of violence and numerous arrests, such that police felt compelled to be stationed outside the installation 24 hours a day, seven days a week.

We are proud to have launched this engaging and thought-provoking digital art installation which was experienced by millions of online viewers worldwide. Until public safety concerns overrode the intent of the installation, HEWILLNOTDIVIDE.US generated an important conversation allowing interaction among people from many backgrounds and with different viewpoints. However, ending our engagement with the installation is the most prudent path forward to restore public safety to the Museum, its visitors, staff, and the community.”

It’s disappointing that, rather than try to come up with an alternative strategy, the MOMI has decided to stop the installation all together. Then again, even though this was a digital project, it was also a performance art piece, and that’s not something the MOMI is used to, as the art therein is generally contained on screens. They’re not generally equipped for a live, human element in the art they present.

Meanwhile, museums like the Museum of Modern Art are. A few years ago, the MOMA did a three-month-long retrospective of the work of performance artist, Marina Abramovich. Titled The Artist is Present, the centerpiece of the retrospective was the artist herself being an exhibit. She would sit in a chair in the middle of the museum’s atrium for the entire time the museum was open (without bathroom breaks or food breaks or anything) and people were invited to, one at a time, sit in front of her as long as they wanted and gaze into her eyes in silence. It was a powerful piece.

It also had its share of disruptors. People would throw things down from overhead, or wait in line for hours just to get in a space with her to do something bananas, usually these seemed to be other performance artists trying to make names for themselves. Whenever a disruption happened, security got involved and escorted them out for Abramovich’s safety, and that of the other museum goers.

Rather than shutting it down, the MOMI could alter the location, or work with LaBeouf and his art partners to have the installation be active only during business hours and then perhaps coordinating a move where the livestream would pick up from elsewhere. Something. Now is not the time for art institutions to become cowardly. We need them to be brave. We need artists to be brave.

On the He Will Not Divide Us site, the livestream simply reads “THE MUSEUM HAS ABANDONED US,”  Then, there’s an edit below the installation description that reads, “On February 10, 2017, the Museum of the Moving Image abandoned the project. The artists, however, have not.”

Here’s hoping that the livestream finds another home soon. Hey MOMA, wanna step in for the save?