Shia LaBeouf's "He Will Not Divide Us", to Sustain Us | The Mary Sue

Shia LaBeouf’s Performance Art Project, He Will Not Divide Us, Seeks to Sustain Us Through the Next Four Years 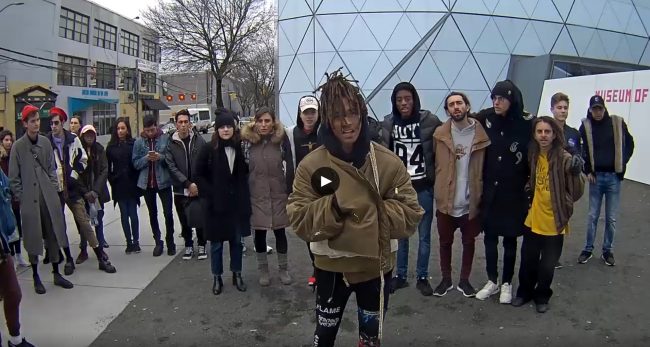 Something that anyone who cares about basic humanity will need over the next four years? Endurance. It’s not just about caring and protesting today, or even this weekend. It’s about remaining vigilant, paying attention not only to our government in Washington D.C., but to our state and local governments as well. This morning, Shia LaBeouf introduced the latest long-form piece of performance art of which he is a part, a piece that seems designed to ensure that we maintain the stamina to JUST DO IT! for the length of Trump’s presidency.

It’s called He Will Not Divide Us, which LaBeouf conceived with his art partners Nastja Säde Rönkkö and Luke Turner, and it’s a project in which everyone (well, everyone who can get to the Museum of the Moving Image in New York City) can get involved. It’s a livestream devoted to broadcasting a simple message of resistance in response to Trump. He will not divide us. Here’s the official description from the website:

Commencing at 9am on January 20, 2017, the day of the inauguration of the 45th President of the United States, the public is invited to deliver the words “HE WILL NOT DIVIDE US” into a camera mounted on a wall outside the Museum of the Moving Image, New York, repeating the phrase as many times, and for as long as they wish.

Open to all, 24 hours a day, seven days a week, the participatory performance will be live-streamed continuously for four years, or the duration of the presidency. In this way, the mantra “HE WILL NOT DIVIDE US” acts as a show of resistance or insistence, opposition or optimism, guided by the spirit of each individual participant and the community.

The most interesting part about this is that those words “He will not divide us” can express a variety of emotions. It can mean, He will not turn people of different races, ethnicities, faiths, or political beliefs against each other. It can mean, The resistance is unified and nothing he does can stop it. It can mean, Our country will survive his presidency and go on in spite of him. It can mean so many other things.

The day started with Jaden Smith (one of my favorite artsy weirdos) participating first as other people on the street started joining in. Many of them were young and/or of color. Shouldn’t you be in school? Nah, we’ve got protesting to do. It’d be easy to be cynical and think that these kids are just looking for an excuse to be truant, but the fact is, if it were just about cutting class…they’d just cut class. But they’re there, making a political statement as best they can, choosing to stand with others united in a message of hope, of defiance, of anger… And yes, this is totally tapping in to young people’s inclination to want to do videos on social media. That’s a good thing.

Normally LaBeouf’s art projects are hit or miss (and generally baffling), but I do love how committed he is to seeking out interesting forms of expression. This project, in my opinion, is a hit. It’s exactly what we all need: a continuous feed of inspiration that will sustain us and our work on the long road ahead.

(via Business Insider, image via screencap)