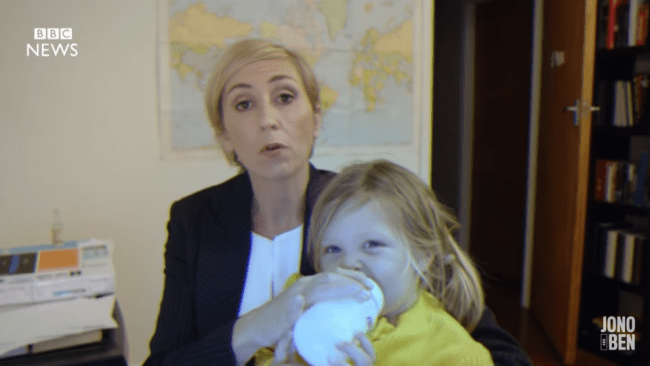 By now, you’ve likely seen that BBC interview with Professor Robert E. Kelly, in which he was interrupted by his two exuberant children before his wife, Kim Jung-A, was able to corral them back out of the room.

Now the comedians Jono and Ben, who are based in New Zealand, have released a parody video featuring a mom who gets interrupted, rather than a dad. Instead of shooing the children out, she just quietly begins feeding them, parenting them, and cleaning the house while continuing her interview.

Admittedly, this video plays into the “mom as supermom” idea–a popular conception that’s fairly criticized as being unfair to men, who are just as capable of multitasking and parenting. There is nothing inherently feminine about doing your fair share, just as there is nothing about being a woman that makes you naturally better at balancing the demands of your kids and your career.

However, the fact remains that while men are just as capable, they are not nearly as expected to exercise those capabilities. Women in two-career, heterosexual marriages still take on the bulk of child-care work. And while millennial men are better about doing their part, and other household chores are more evenly split, women are still expected to take care of the children more often than men are.

And when I say “expected,” I do mean that it’s seen as a given. That’s part of what works for me in this video; the mom is so blase about what she’s doing, anticipating neither credit nor help. That speaks to the reality of parenting for a lot of mothers. No one is rushing into the room to remove the kids for them, the way that Kim Jung-A does for Kelly during his interview. The best they can hope for as they balance career and family is not to be too harshly judged or criticized. Men, on the other hand, often receive outsize praise for any parenting they take on.

Then, of course, the video takes a turn.

Ugh. I really wish they hadn’t ended with the dopey husband hunting for a sock at the end. I wish he’d instead come in, seen her surrounded by the kids, and said, “Oh, look’s like you’ve got it under control,” or something else that pointed to his unrealistic expectations of her–“Women can finish their work and take care of the kids at the same time, no help needed from me!”–rather than making him into a sexist, stale oh-those-clueless-men-and-their-laundry gag.

This ending is especially disappointing because it contributes to what the video is critiquing. One of the reasons that men aren’t expected to take on more parenting work is because of low expectations like the one this video reinforces. The idea that men are just intrinsically inept at housework and parenting is poisonous sexism that only serves to push more domestic labor onto women.

The problem is never that men can’t do these things. It’s that they don’t think they should have to.

(Via Variety; image via screengrab from the parody)