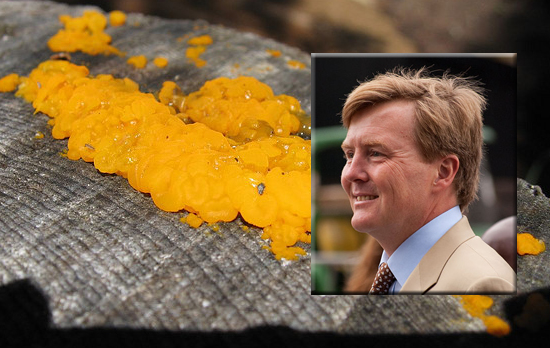 If you’re in line to be king, there’s all kinds of ambitions and fears that might be playing through your head: Will you be a good king? Will you make a difference? Will the Lannisters cut off your head? One thing you probably wouldn’t be wondering: Will someone name a mold after me? Prince Willem-Alexander, Prince of Orange and heir to the throne of the Kingdom of the Netherlands, is getting a newly discovered mold species named after him — and his whole family.

And why the crown prince of the House of Orange-Nassau? The head of the Dutch CBS-KNAW fungal research center, Pedro Crous, explained it’s because — you guessed it — “what distinguishes this penicillin is its orange color, a very rare phenomenon.”

Appropriately, it’s actually a family of molds that are all part of the same species:

In April, Queen Beatrix will be giving up her throne for Willem-Alexander, and I can only assume a sample of the molds will be present at the ceremony in some fashion.

They haven’t found any particular use for the mold — which is a little sad, given that this discovery is named in the honor of the prince. This is the same prince, by the way, whom the Dutch wanted to grant the world record in Facebook “likes.”

But I still think this is grand, too. Everyone may get their 15 minutes of fame — and royals typically get more — but your name will live on forever if you get an astronomical body or fungus named after you.

(via PhysOrg, images courtesy of Wikipedia and tangentier on Flickr)