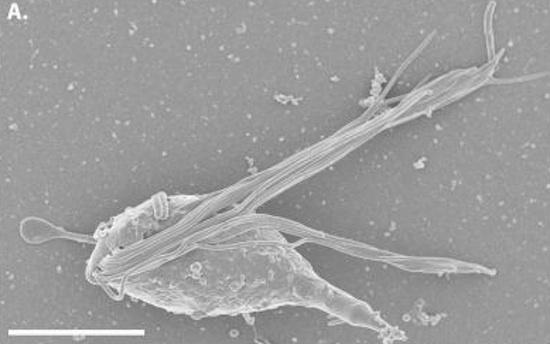 A pair of microbes that help termites digest wood have been identified by researchers at the University of British Columbia. While finding new forms of life is always cool, this one probably wouldn’t have caught our eyes if not for one thing — the researchers who discovered the symbiotic microbes have named them after dread Cthulhu, and therefore earned our undying respect.

The two new species are Cthulhu macrofasciculumque and Cthylla microfasciculumque, the latter named after the less well known daughter of the greatest of the Great Old Ones. According to lead researcher Erick James, he and his team aren’t devotees of ancient monsters from beyond the veil of space and time or anything. Instead, the names were inspired by the octopoid movements of the newly discovered symbiont. “When we first saw them under the microscope they had this unique motion, it looked almost like an octopus swimming,” James says. Being good sci-fi dorks all, octopoid features reminded the team of Cthulhu, and the names stuck.

There’s no need to fear for your safety now that Cthulhu (well, a Cthulhu, anyway) is officially on the loose, though. The newly named protists are small even for single-celled animals, measuring no more than 10-20 microns in length, and live only in the stomachs of termites. Thus, the odds of them rising up to destroy human civilization and bring about an eternity of chaos and blight are, we like to think, fairly slim.

For our part, though, we do hope that the lab will continue down the road this naming convention has put them on, as there are no doubt microscopic beasties waiting to be discovered that would remind one of Nyarlathotep, Yog-Sothoth, or any number of cosmic horrors. Keep up the good work, UBC!