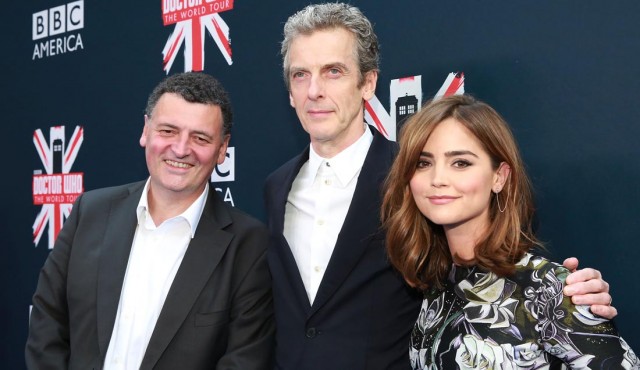 Did you strongly dislike any episodes of Doctor Who season eight? If you did, you’re probably wrong, and future generations will prove it to you—at least according to showrunner and writer Steven Moffat.

Frank Cottrell Boyce’s “In the Forest of the Night” was recently voted everyone’s least favorite episode of season eight—you know, the one where sentient trees protect the Earth from solar flares and a young girl’s mental illness turns out to be aliens because medication is evil. But though the fans may have hated it, Moffat doesn’t think we know what we’re talking about.

When asked what his favorite episode of season eight is, Moffat said,

I think I’d give a shout out to an episode that I think will grow in stature over the years because it’s so beautifully and elegantly written, “In the Forest of the Night.”

There were people who thought it was maybe scientifically inaccurate – they’re wrong, I checked with the scientists – and any piece of television that includes the line of dialogue ‘catastrophe is the metabolism of the universe’ as a part of popular entertainment has to be… a beautiful episode!

And then called those in the audience who agree with him “very wise.” Guys, he checked with the scientists! About the sentient trees and the aliens! So you can’t dislike it!

I’m not a blind Moffat-hater—I say this all the time, but I think season five was Who‘s all-time best and “The Eleventh Hour” is my favorite episode— and I know that he can make great television (who doesn’t love Sherlock?) But Moffat’s frequent derision of the Who fanbase irks me to no end. He clearly looks down on the superfans who make both him and his show a success, and that kind of hypocrisy doesn’t sit well with me at all. Telling the fans they’re “wrong,” that history will prove him right, even fan-proxy Osgood’s fate in the season eight finale—all of these things make Moffat look like he hates the very people who keep him employed. And it’s getting pretty gross.

Who would you like to see take over the Doctor Who reins next?