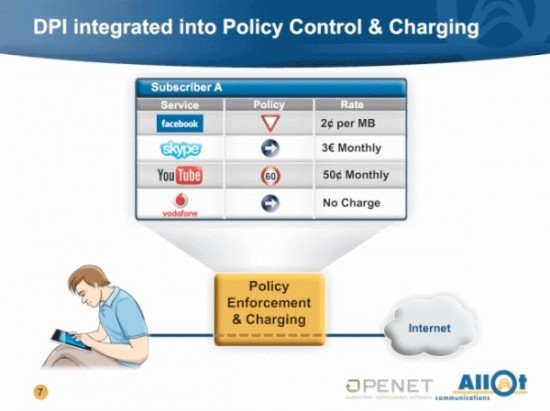 Internet service providers Allot Communications and Openet, two companies that have some pretty esteemed clients in Verizon and AT&T, made a scary presentation at a web seminar, which showcased a PowerPoint presentation, featuring the slide shown above. No, you’re reading it right: The slide proposes a future where wireless providers monitor and charge people for using individual services, such as Facebook, Skype and YouTube.

Of course, the slide was simply a musing and not some kind of official proposal, but it’s scary to know that these kinds of things are being discussed and presented by suppliers to companies like Verizon and AT&T. This kind of idea isn’t exactly new, though, as it’s basically the backbone of premium television packages: Charging to use Facebook through one’s mobile phone isn’t very different from charging to watch NBA TV through one’s television. One can even make the argument that charging per service on a mobile phone is fairly similar to the idea behind subscription-based video games, namely MMOs.

Whether or not charging per service is a strategy already applied to other forms of media, it doesn’t mean having it applied to another form of media–especially one that most people keep in their pocket at all times–is something we’re all wishing would happen.

Pop on over to Wired to check out a more in-depth article regarding the doomsaying PowerPoint presentation.