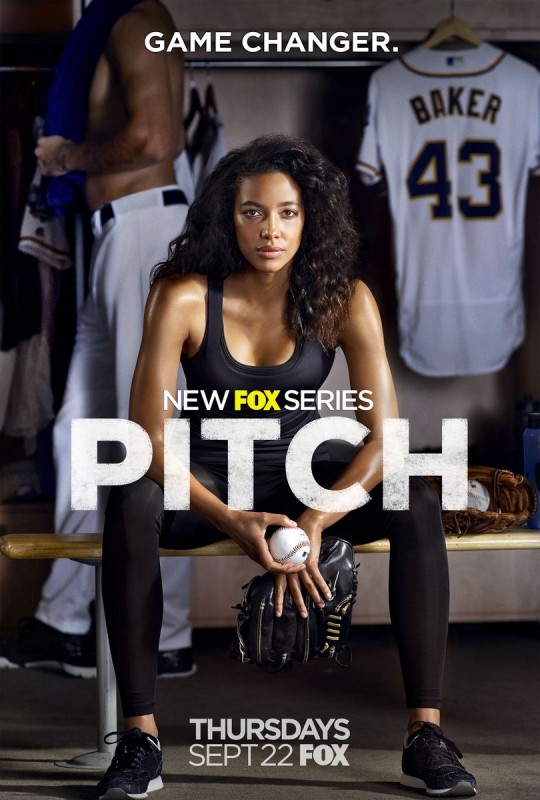 Pitch is an intriguing new series starting this month on Fox, which features a black, female protagonist who also happens to be doing something groundbreaking — she is the first female baseball player in the major leagues. Fox and Major League Baseball have entered into a pact giving the show unprecedented access to the MLB for assistance on the show. Could it be that Major League Baseball is dipping a toe in the whole Women Playing Pro Baseball thing? Oh, the magic of TV!

First, if you haven’t already, check out this trailer for the first season of Pitch:

I got goosebumps just watching that, and I don’t even play sportball!

Fox and MLB already have a relationship to the tune of $12.4 Billion for the rights to air games through the postseason, as well as the World Series. However, for their pact regarding this show, no extra money exchanged hands, though there are clear non-monetary benefits for both sides. Basically, the MLB is in full support of the show, and will both allow the use of team names, uniforms, equipment, and stadiums as shooting locations, and provide consulting on how the game is played to the cast and crew to ensure that all the game play we’ll be seeing on screen looks real.

And it’s about more than just game play. While former Baltimore Orioles pitcher Gregg Olson has been working with production and the show’s lead actor Kylie Bunbury (who can apparently now throw 60 mph!) on the finer points of playing he, along with ex-Giants shortstop Royce Clayton and journeyman catcher Chad Kreuter, also met with the show’s writers to talk about what happens behind the scenes and between players on the field between plays. According to The Hollwyood Reporter, they had “detailed conversations about what racism looks like in baseball, as well as what it would really be like to have a woman on the roster.”

For Fox, there’s a clear benefit in having this unprecedented level of support from MLB on a baseball show, lending it an authenticity no other baseball film or TV show has ever had. Show co-creator Dan Fogelman said, “If we didn’t have MLB, I don’t think we could have done the show because I didn’t want to create fictional teams. That defeats the whole purpose.”

He then goes on to explain MLB’s major concerns: reminding people that baseball is an awesome sport, and not painting MLB in a bad light. However, that doesn’t mean that the show is going to be kissing MLB’s ass. Apparently no topics (including steroids, gambling, and domestic abuse allegations) are off-limits, but Pitch will deal with these real issues in a real way. Says co-creator Rick Singer, “[MLB’s] main concerns were that we were going to paint the game in a bad light. They wanted to make sure we were interested in telling good stories and not salacious, just for the sake of, ‘Oh, let’s do steroids this week and gambling next week.'”

My hope is that the reason MLB is so supportive of this particular show is that they want to help sports fans get used to the idea, because this is something that is quickly coming down the pike. Already, minor league baseball hired two female players this season. With girls like now 15-year-old Mo’Ne Davis coming up through Little League (though she happens to be a prodigy at multiple sports, so there’s no guarantee she’d even choose baseball if she went into a sports career), it seems inevitable that the story of Pitch is only a matter of time.

The above trailer for the show calls Pitch “A true story on the verge of happening.” It’s awesome to see that MLB has warmed to that and is doing its part to encourage that fans are supportive. This way, by the time Mo’Ne is ready, crowded stadiums will receive her with big cheers.