MIT Shooters Appear To Be Connected With Boston Marathon Bombings, One Still At Large 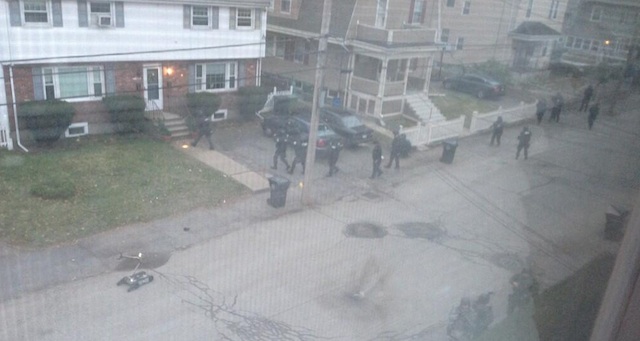 After last night’s shooting at MIT and the ongoing manhunt that followed,  the entire city of Boston and the surrounding area are on lockdown this morning. Moments ago, Governor Deval Patrick spoke to reporters urging people in the area to stay in their homes with their doors locked until further notice. While one of the shooters has died of wounds sustained in a gunfight with police, another remains at large and is considered armed and dangerous.

The at large shooter is being identified as Dzohkhar Tsarnaev, and it is being reported that he and the second suspect, his older brother Tamerlan Tsarnaev, were suspects in the bombing of the Boston Marathon earlier this week. After apparently holding up a 7-11 and fatally shooting an MIT police officer, the suspects carjacked themselves a car and assaulted police with explosives. Following a gun battle with police, Tamerlan died of his injuries at Beth Israel Medical Center earlier this evening. Dzohkhar abandoned the car and fled on foot. He is still at large and considered armed and dangerous.

If you managed to sleep through this last night, congratulations. In you’re so inclined, you can get caught up with our coverage from last night here. If, on the other hand, you would rather just pull the covers up and go the hell back to bed until this whole sordid mess comes to an end, we can’t really blame you on that front, either.

Again, if you’re in Boston or the surrounding area, authorities are asking that you stay in your home and not answer the door for anyone but identified police officers. At the moment, all mass transit in the city is at a standstill, most businesses remain closed, and schools — yes, colleges like Harvard and Boston University too — in the area are shuttered. Stay safe, all.