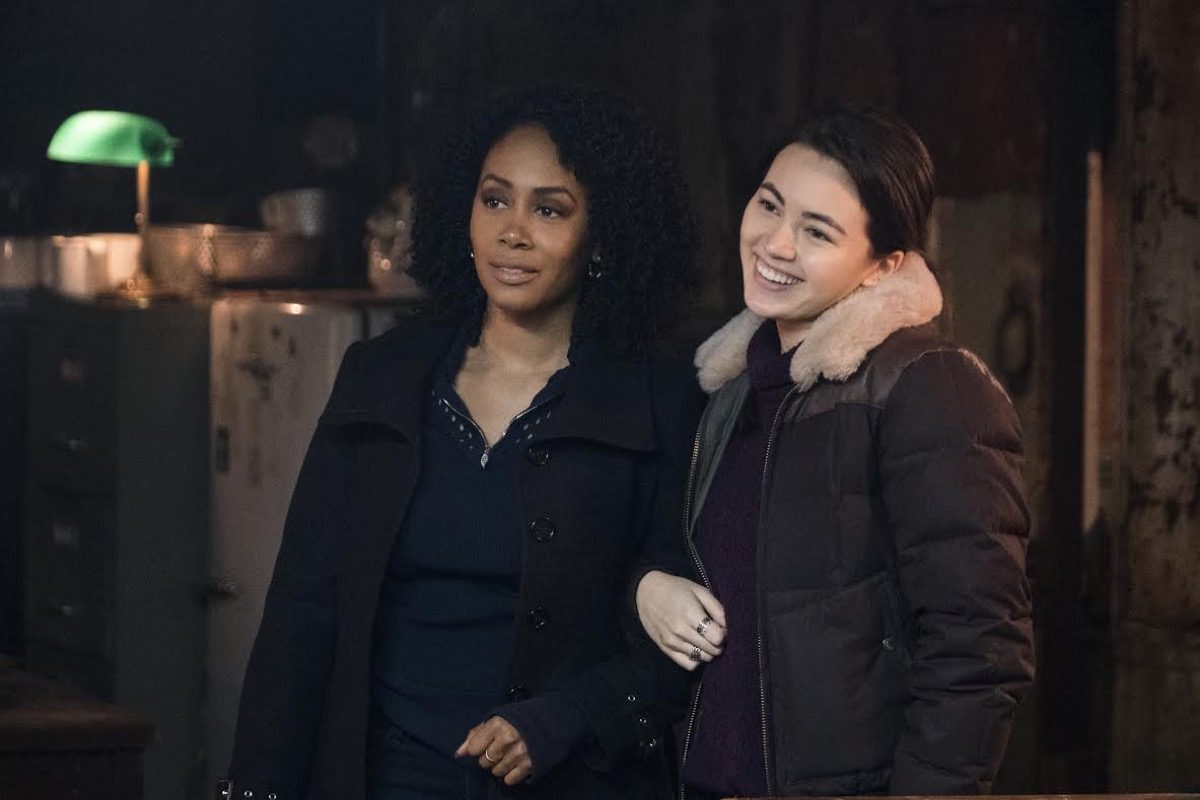 For all its messiness, obvious dialogue, and ludicrously Orientalist vision of Chinatown, the second season of Iron Fist was definitely better than the first. A huge part of that appeal came from leaning on its secondary characters and creating more of an ensemble storyline—and no part of that ensemble made me giddier than the Daughters of the Dragon.

Colleen Wing (Jessica Henwick) and Misty Knight (Simone Missick) spend a good chunk of this season sleuthing and ass-kicking together, while leaning into and growing the dynamic that they established in the second season of Luke Cage. Just as in their appearance there, here they have an easy empathy for each other. Their connection is neither fraught nor intense. They simply see each other, in a fundamental way, and it makes for a refreshing depiction of female friendship on TV.

Now, if you want to enjoy their dynamic but don’t want to watch an entire season of Iron Fist, just check out Episode Six, “The Dragon Dies at Dawn.” This is where Misty and Colleen have both a badass fight with a trio of female tattoo artists and also an argument about snacks. You’re welcome.

Their scenes with those tattoo artists, the Crane Sisters, are some of my absolute favorites of the season. I love how Colleen is the least believable tattoo shop customer ever. I love that Misty just keeps going with their cover anyways. I love Colleen’s competitive little smirks as she starts to fight with the Sisters. I love that one of Misty’s interrogation questions is simply, “I’m sorry, but what the hell is wrong with you all?”

Most of all, I love how natural their banter felt to me. Oftentimes, quipping characters will speak in the same voice—both of them sounding like the writers at their funniest—but here, Colleen doesn’t always answer Misty’s quips, often just grinning back at her and reveling in them. She’s like a kid who’s never cut class, suddenly finding herself in detention with the coolest girl in school, and I love that Misty so clearly enjoys having a willing audience and drawing out Colleen’s sneaky-snarky side. It’s a joy.

Of course, they also have a deeper connection outside of their chemistry. When we last saw them in Luke Cage, Colleen was helping Misty to train after she lost her right arm in Defenders. As she forces her to use her non-dominant arm, Colleen neither babies nor bullies Misty. She trains her as if she’s exactly as capable and strong as she is. “Never pity,” she promises her. “Ever.”

Luke Cage was also where we first got to see Colleen’s sly, wry sense of humor match up with Misty’s gleeful shit-talking. When they tag-team a bar fight in Episode 3, “Wig Out,” there’s a wonderful moment where you see their partnership start to blossom. A man knocks Misty to the ground, and she has to decide whether to retaliate or get out. She looks over at Colleen—half for backup, half for permission—and Colleen just takes a knowing swig of her beer. It’s a wonderfully subtle moment, where Colleen shows that she understands just how badly Misty needs this fight, but doesn’t promise to fight this battle for her.

(Until one of the men smashes a beer bottle and goes to glass Misty, obvi. Then Colleen steps right into the fray.)

“They both identify each other’s pain,” Missick said in an interview with SYFYWire, “and yet, at the same time, neither of these women is the type of woman to sit there and cry with you and say, ‘Go ahead. Wallow in it. Spend as much time as you need.’ They’re both women who say, ‘All right. You had enough. Now, what are you gonna do?’”

And that’s still the same question they’re asking in the second season of Iron Fist. (Literally, they ask each other, “What’s your five-year plan?”) However, whereas Misty was the one struggling in Luke Cage, Colleen’s the one in trouble here. She’s grappling with her relationship with Danny, with her fear of her own strength, and with her desire to protect her neighborhood—and Misty, quite simply, sees her for who she is.

In part, she does this by calling her out on her nonsense. As they’re on their way to interrogate the Crane Sisters, she says, “You said that you were done with this life. You put your sword up on the wall, but you came with me to grab Joy, and this? This was your idea.” She knows that, for all her talk, Colleen can’t keep out of the fray. Whereas Danny seems to take Colleen’s newfound pacifism at face value, Misty isn’t buying it.

(Speaking of Danny, I clapped at the screen when Misty said, “He is an adult, Colleen … You two are building a life together, but being in a relationship with someone is not the same as taking responsibility for them.”)

But for all their straight talk, detective work, and banter, Colleen and Misty are also just so blessedly corny with each other. Misty tells Colleen, “It’s a difficult thing to become [a hero] because most people are too weak, too stupid, or too selfish—usually all of the above. You’re not.”

And Colleen tells Misty that she has “skills most people can’t comprehend … We could not have done this without you.”

We all need women in our life who just shamelessly big us up, and I loved watching Misty and Colleen do that for each other so bluntly. They even manage to make Iron Fist’s relentlessly ham-fisted dialogue, in which everyone loudly declares what they are feeling for the audience, work.

When Colleen tells Misty, “I don’t even know you, and I think this is the closest thing I have to a healthy relationship,” I almost rolled my eyes at the over-the-top obviousness of the statement, but Missick finds a way to turn this corny dialogue into something that made me smile rather than groan. She doesn’t nod along or clap Colleen on the back. She twists her mouth in a Good-God-look-at-my-life smirk. “Same here.”

Their friendship is a delight to see onscreen, and it’s one I’ve experienced in real life, where you just look at the other woman and think, “I see you. I know you. I get you.” It’s a friendship built on mutual respect for each other’s competence, the sort of comradery we usually get to see male characters build.

I honestly have no idea where the showrunners are planning to go with Iron Fist and its many characters, but whatever happens to the rest of them, I hope we at least get to see more of the Daughters of the Dragon.