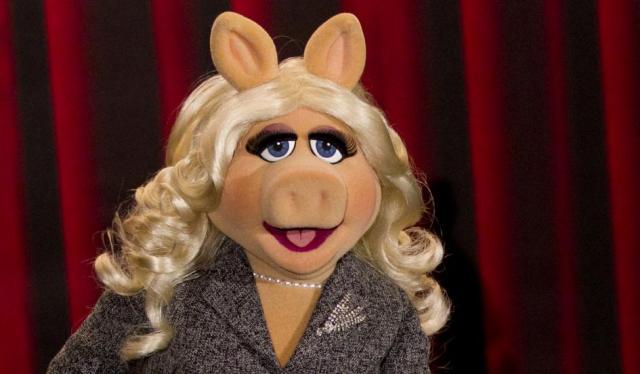 Before I knew feminism was even A Thing, Me As A Girl knew that I loved Miss Piggy because she didn’t take any crap. She flaunted her voluptuous physique and was confident that she would always have the heart of the frog of her dreams. She demanded respect in her career, and she cut through bullshit with a mighty HIYYYYYYYY-YAH! Which explains why Miss Piggy is the latest recipient – in a list that includes trailblazers like Sandra Day O’Connor, Toni Morrison, and director-choreographer Susan Stroman – of the Sackler Center First Award, an award presented by the Brooklyn Museum’s Center for Feminist Art.

In a recent interview with Time Magazine, Miss Piggy makes no bones about labeling herself the “f-word”:

Some might say moi is just a mere Hollywood celebrity who cares more about her appearance, her star billing, and her percentage of the gross than about women and women’s rights.

To which I can only respond: “Oh yeah!?!” By which, of course, I mean that moi is now and has always been an ardent feminist and champion of women’s rights.

It’s true, I did not march in Women’s Rights parades down Fifth Avenue in the early 1970s. (That was long before I was born). However, today, in solidarity with my feminist foremothers, I go shopping on Fifth Avenue whenever possible.

And it is true; I did not burn my bra. Was this a political statement? No, it was simple common-sense economics. When one pays top dollar for intimate apparel like moi does, setting it ablaze is wasteful, improvident and highly incendiary.

Really, though, Miss Piggy’s definition of feminism all boils down to women having choices and options, and not apologizing for them:

Gotta say, I wish she’d start going by Ms. Piggy, because MARITAL STATUS BE DAMNED. But still – this pig is on the right track. So, in order to fight the patriarchy….karate lessons. Got it. I’ll start here: