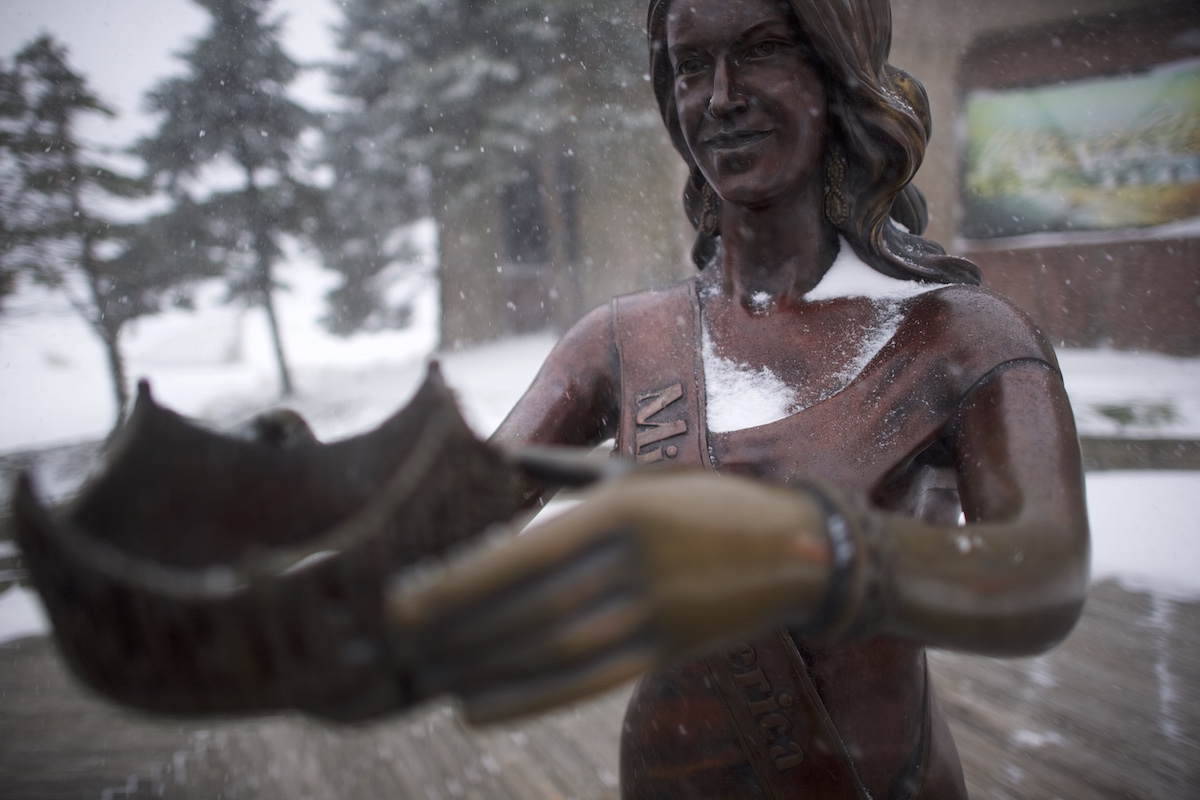 Last month, the Miss America Organization announced that the infamous swimsuit competition would no longer be included in their program. As the new board chairwoman and former Fox News host Gretchen Carlson explained, this is part of a larger push to rebrand Miss America as more inclusive and modern. They’re not using the word “pageant” anymore–it’s a competition–and the goal is to not judge women by their outward appearance. Scholarships and philanthropy have always been driving forces for the contestants, but not so much a part of the public’s perception of the organization. They’re hoping to change that now.

At the time though, we wondered how successful this overhaul would be and specifically if the state and local competitions that serve as preliminaries for the national competition would also be adopting the same new guidelines. Because if Miss America has this new woke, non-superficial approach, but their contestants came from state-level pageants that still judge on swimsuits on ballgowns, that sort of corrupts their pool, doesn’t it? Will the preliminary competitions take this overhaul seriously?

It seems we have our answer, at least for the time being. Maude Gorman, a Miss Massachusetts contestant, withdrew from the competition after the host mocked the #MeToo movement onstage. The host and another person dressed as god were acting out a skit in which she was lamenting the end of the Miss America swimsuit segment. The host says, “I’m trying to understand, God, why it happened.” God replies, “Me too,” while holding up a sign reading #MeToo, the clear implication being that the #MeToo movement is to blame for the decision.

It’s not a funny joke. It’s not clever or edgy. It relies solely on “punching down,” making survivors of sexual assault into the butt of a joke. Maude Gorman, herself a rape survivor who has spoken openly about her experiences, was backstage with the other contestants and said the exchange was “heartbreaking to hear.” She told the Boston Globe, “In that moment, everything collapsed right in front of me.”

In resigning, Gorman had to forfeit her title of Miss Plymouth County. She wrote in an Instagram post explaining her decision, “As both a survivor, and advocate for victims rights and sexual violence on a whole, I refuse to stand idly by and simply ‘let this go’. Instead, I will stand up for every individual who has ever had the courage to speak out; and for every person who felt liberated by the #metoo movement. I will not allow ANYONE to take away that empowerment and liberation, or make it anything less than what it is: AMAZING.”

Today, I officially resigned from the title of Miss Plymouth County 2018. While I’m grateful for the opportunities that @missamerica creates for young women, I am also internally conflicted; as the #metoo movement was mocked on stage during the final competition of Miss Massachusetts. As both a survivor, and advocate for victims rights and sexual violence on a whole, I refuse to stand idly by and simply “let this go”. Instead, I will stand up for every individual who has ever had the courage to speak out; and for every person who felt liberated by the #metoo movement. I will not allow ANYONE to take away that empowerment and liberation, or make it anything less than what it is: AMAZING. #metoo #missplymouthcounty #nomore #rainn #surviveandthrive

There are plenty of people who view the #MeToo movement as an overblown “trend,” rather than what it actually is: a collection of voices of real women and men who for too long were forced to keep silent about the abuse they’ve experienced.  #MeToo is made up of individuals; it is only a “movement” because there are so many individuals who have suffered. When someone like this host (or, say, the president) mocks the movement, they’re mocking every single person who has spoken out about their rape, assault, or harassment.

The Miss Massachusetts competition apologized to “those offended” by the skit, writing on their Facebook page, “Moving forward, we will review all content with future emcees and other participants prior to our show to be sure offensive or potentially offensive content is not allowed.” It will be interesting to see how this and other competitions adapt moving forward. As of now, according to Observer, all but five of the 51 (including D.C.) state-level competitions still include swimsuit segments. The attention that’s been brought to Massachusetts over this “joke” hopefully sends a message that the competitions that refuse to embrace change will be left behind.