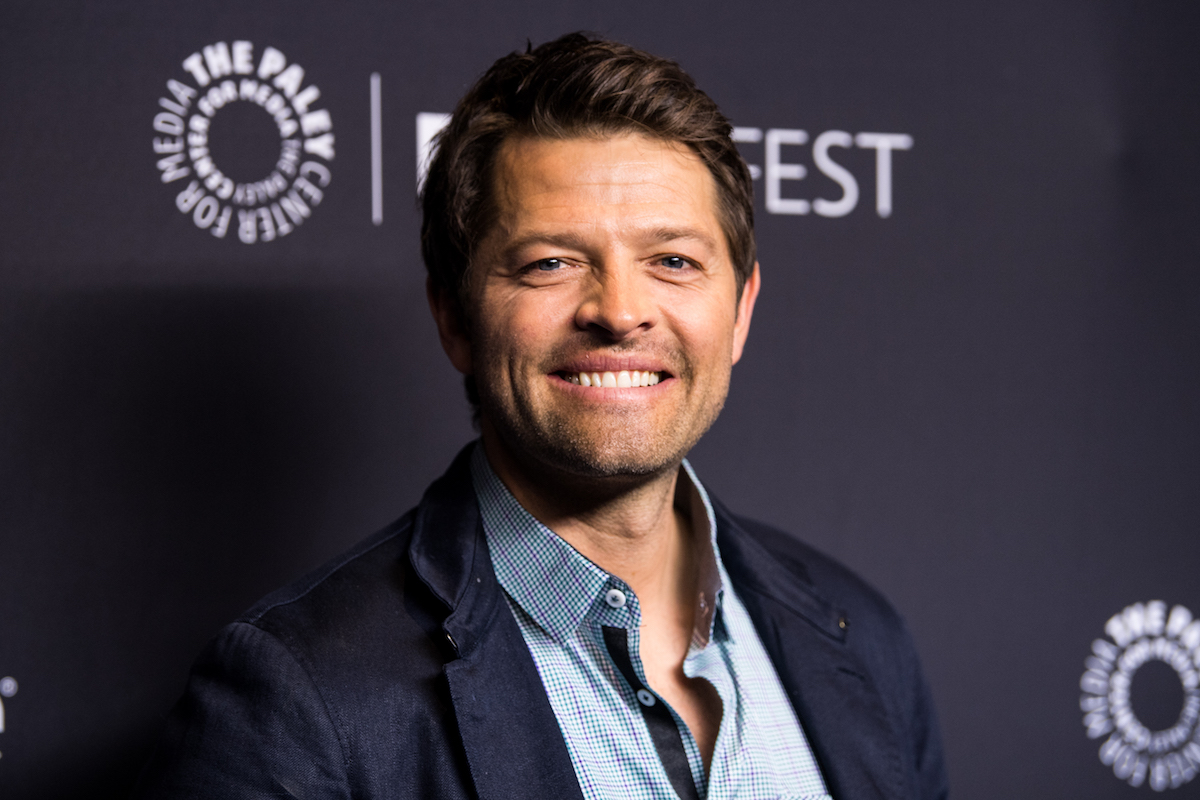 Misha Collins’ Gish scavenger hunt just raised over a quarter of a million to help survivors of genocide, and it’s just the beginning.

Ten years ago, Misha Collins’ life was very different. No kids, living in L.A., and he’d just been cast in a potentially recurring role on a little-known show that had just barely survived the 2008 writers’ strike. Going into its third season, Supernatural had left one of its main characters, Dean Winchester (Jensen Ackles), stranded in hell, and Collins was cast as the angel in a trench coat that saved him.

Castiel changed everything for the show, gave it new energy, and disrupted the established dynamics of the Winchester brothers in the best way. Ten years later, Supernatural is going into a practically unheard of fourteenth season, and Collins is still disruptive, prone to changing the world, and very good at saving lives (with some help from his friends)—and that’s just offscreen.

Collins has mobilized Supernatural’s fervent fanbase into unbelievable acts of charity and weirdness, and the incredibly fun and subversive method has been through Gish (formerly GISHWHES), a scavenger hunt that literally changes lives, all while spreading creativity, kindness, and sending Christmas trees floating off with the help of helium balloons. Collins took some time to chat with us about the past and future of Gish and how, just last week, the hunt changed the lives and circumstances of an incredible woman and her community.

“I first started being playful and interactive with the Supernatural fandom on twitter eight years ago,” Collins said of the genesis of Gish, “because I had seen a lot of creative work being done by the fans, and I thought, well, there’s a lot of creative potential here that can be tapped into.”

Initially, Collins funneled that energy into his charity, Random Acts, a fully functional 501(c)(3) dedicated to funding and promoting random acts of kindness throughout the world, “but then that took on a new iteration with GISHWHES,” an admittedly awkward acronym for the Greatest International Scavenger Hunt the World Has Ever Seen, where teams from around the world compete by submitting photos and videos of, well, very weird things and activities.

“The initial impetus behind it was to try to get other people to do the art projects that I had been carrying around in my head for a while and never got around to doing,” Collins explained, but he quickly saw that “that creative energy was just an incredible well to draw from, and that there was a potential for a crossover between this creative fun that we were doing with this scavenger hunt and charity.” The results have been crazy fun, and sometimes just crazy.

Now in its seventh year, GISHWHES has rebranded as just “Gish.” For this outing, Gishers were able to use a brand-new app to track the list of over 200 items, from flinging pudding at each other to performing a nose flute concert at a children’s hospital, not to mention posing as a domiKnitrix or gathering over 10,000 socks to donate to the homeless and break a world record. But the most amazing thing Gish has done is to make kindness, volunteering and generally making the world better fun.

“It’s just remarkable to be able to do that when we’re playing a game,” Collins said. “I just sort of pinch myself that we are so fortunate to be able to do that.” From millions of random acts of kindness to saving actual lives saved through a previous year’s item that signed gishers up as bone marrow donors, Gish has truly touched people. For the last three hunts, one list item has asked Gishers to create fundraising pages to get folks from outside their teams to donate to help truly change a life, and the results have been incredible. 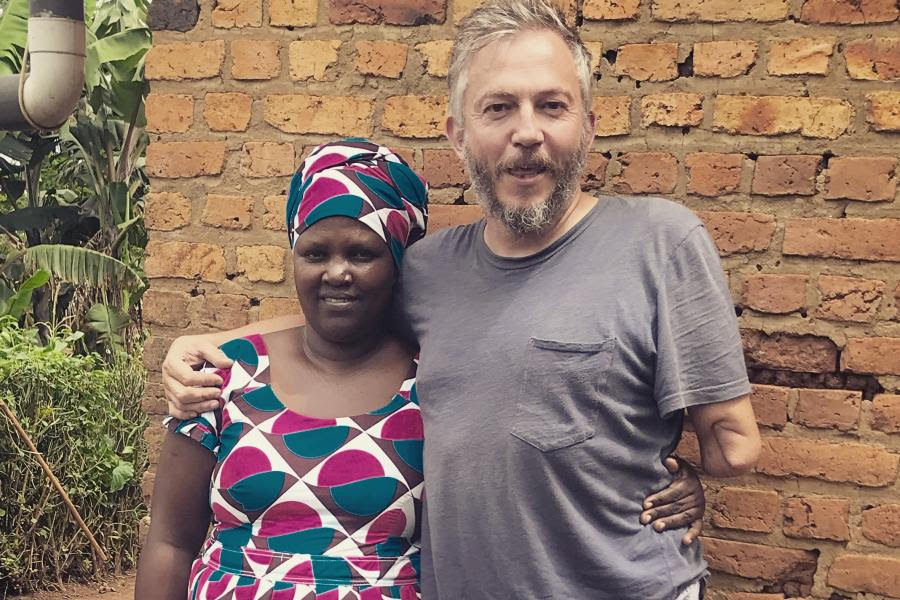 To change these lives, Gish has partnered with war photographer Giles Duley, a survivor of a landmine explosion that left him a multiple amputee and a remarkable person himself, who has dedicated his life to turning attention to some of the darkest and most desperate corners of the world. According to Collins, sometimes Duley is dismayed when he returns to a place he’s covered to see “those same people are in those same dire circumstances,” but he’s been able to turn to Collins and Gish to change that.

In 2016, Duley helped Gish identify several Syrian refugee families and relocate them to start new lives. The following year, Gish saved a dance school in South Africa, ensuring that it would continue years into the future, even after the founder passed away from cancer.

This year, Gish found a woman whose story was truly extraordinary: Olive, who Duley met in Rwanda while documenting survivors of genocide. It’s an understatement to call Olive a survivor. At the start of the 100-day Rwandan genocide, Olive was in the hospital in labor. “While she was in the hospital delivering her third child, she got the news that her grandparents, her parents, her two other children, and her husband and her siblings had all been killed,” Collins explained.

“Then, her hospital was surrounded, and over a megaphone, the militants ordered everyone in the hospital to come out. She hid her baby under blankets in an incubator and left the hospital.” From there, Olive and others “were walked over to an open-air marketplace where 1,200 people were slaughtered,” but not Olive. She hid under the bodies of other victims for three days, until she was able to return to the hospital to rescue her son, who survived.

In the face of this horror, Olive returned home to her village and adopted six orphaned children. “But the thing about the Rwandan genocide is that the killers were walking amongst the population that had been the victims,” Collins went on. “They had been neighbors before the genocide and they stayed neighbors after the genocide,” and so everyday, Olive would see the people that had murdered her entire family.

For most people, this would be an even more terrible burden to bear than the grief of what was lost, but Olive instead did something extraordinary. She went to these neighbors, these killers, “and told them that she had forgiven them. And they over time began to help her rebuild her life. So, the men that killed her family, ended up helping her build her garden plot and fix her shack.”

Olive is a member of a farming collective of twenty-five women in her village, who were “barely scraping by as subsistence farmers, because they don’t have enough acreage to grow enough crops to support their families,” Collins explained, which is where Gish came in. They committed to buying land, tools, and market stalls for Olive’s collective.

When Duley delivered the news that Gish would be attempting to help her collective, Olive was surprisingly not thrilled, because there were three other collectives in the village. If Gish couldn’t help all the women, she wasn’t sure she felt right participating and was willing to take less to make sure the entire community would benefit.

“That just threw down the gauntlet for us,” Collins said. Gish set a goal of $100,000 dollars to help 100 women. They raised over $264,000, purchasing farms and tools for the four collectives in Olive’s village and six additional collectives in a neighboring village. “We have raised enough money to buy enough acreage for them to make a living for themselves and their families in perpetuity,” Collins said. “We did it through playing a game, and making paintings of Jensen Ackles’ face with melted skittles, which I think is remarkable.”

Though the 2018 main hunt is now over, the gishing isn’t. On the Gish app, you can talk with fellow gishers in your immediate geographic vicinity, but more importantly, according to Collins, “We’re also going to be issuing ongoing challenges throughout the year for people who register for next year’s hunt.” Next year’s hunt? Yes. Registration starts next week!

“We’re going to be opening an early bird registration for next year, and those people that sign up for that will be able to participate in sort of year-round challenges and community-building events, that will keep us tethered to one another until next summer.” If you can’t afford to play, apply for a Gischolarship, where another gisher will foot your bill. “I don’t ever want anyone to be painted out of the experience because they don’t have money,” Collins assured me, because Gish is for everyone.

I don’t think anyone imagined, when Castiel made his iconic entrance ten years ago, that fans would be saving lives and making skittle art in his name, least of all Collins. “It’s surreal that I have the opportunity to reach enough people because I’m on this strange sci-fi show that will listen to me enough to go along with playing games with me.” Ever humble, Collins doesn’t think this hunt is about him, or the prize: an all expense paid trip to an exotic location. This year, it’s New Zealand.

Fans of Supernatural are certainly lucky to have him and play along in this life-changing game.