Interview: Misha Collins’ GISHWHES Will Take You on the Hunt of Your Life 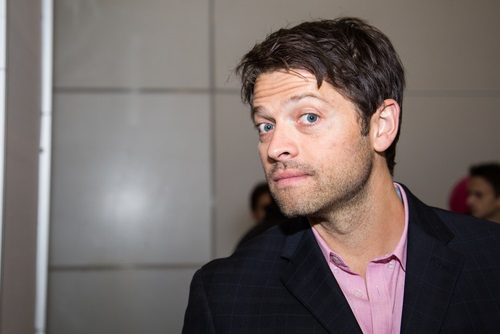 TV star Misha Collins has seven world records—would you like to join him to get another? Or maybe you feel like covering yourself in jam and giving out free hugs on the sidewalk; or giving a puppet show to a child in the hospital; or making a beautiful angel sculpture…out of feminine hygiene products. That’s the kind of thing that can happen when you join the adventure that is the Greatest Scavenger Hunt the World Has Ever Seen, aka GISHWHES.

GISHWHES is a digital scavenger hunt in which participants compete by submitting photographs and videos from a list of items ranging from the silly and kind to the incredibly weird and maybe impossible. How did this start? In 2011, Collins—who plays the angel Castiel on Supernatural—promised his legions of twitter followers to share a rhinoceros with them if they helped Supernatural win a People’s Choice award. “I painted myself into a corner,” Collins says. And after the LA zoo in its “infinite stinginess” refused to provide rhino poo to return to followers (who had eagerly sent Collins plastic-lined envelopes), a different plan emerged. Collins, who participated in the annual University of Chicago scavenger hunt years before, instead sent puzzle pieces to fans that placed them on teams to compete in an online hunt. Initial items ranged from photographic proof of life after death to participants holding one of their puzzle pieces in front of an MIG fighter.

“I had an amazing time running that little scavenger hunt, and the people that participated in it did so with such gusto and created such amazing-looking things that I realized that I wanted to keep doing it. It was the most fun I’d ever had,” Collins says. Thus GISHWHES was born in November of 2011, where it smashed the Guinness World Record for Largest Digital Scavenger Hunt. Teams submitted items such as a photo of an “unconventional but practical use for mayonnaise” and video of a choir singing “Eye of the Tiger.” “It has been growing kind of exponentially ever since.”

So, how does it work? The hunt is open to anyone 14 and up, anywhere in the world, so long as they have a willingness to be weird. Interested parties can sign up at GISHWHES.com to become part of a team of 15. Many participants form teams ahead of time, but if you don’t have one, don’t worry—you’ll be assigned with people who will become your friends for life. There is a registration fee, but proceeds beyond the cost of the prizes and management go to support Collins’ charity Random Acts, which spreads kindness all over the world (in a recent GISHWHES “telethon” livestreamed on facebook, Random Acts donated goats to families in Africa and reconstructive surgery for breast cancer survivors with every registration milestone). If you can’t afford to register, many provide “Gisholaships” for those in need.

On a set date, the list of over 200 items is posted (it’ll be on July 30th this year), and teams have a week to submit as many as they can. Every item has a point value; the team that gets the most points wins. The grand prize is to join Collins on an all-expenses-paid trip to an exotic location, which changes each year. This year it’s Iceland, while previous years’ trips have included Croatia and Costa Rica.

So, how does Collins come up with the crazy items for the list? He collects ideas all year and “by the time July rolls around I have a pretty big list of rough ideas. We also solicit items from other celebrities,” like William Shatner (who has his own team) and Collins’ Supernatural co-stars. “My mom always sends me about 30 ideas. It’s a bit of a team effort.” Collins’ children also help out. Of course, asking a four year-old for ideas can be dangerous: Last year Misha’s son West wanted to see a picture of full-sized boat attached to a moving plane…which turned out to be rather unsafe and was removed.

Some items can be as simple as registering to be a bone marrow donor, and others can get political, like tweeting pictures of gay couples to Rick Santorum. The list is still being compiled for this year, but Collins told me he “can guarantee that, this being an election year and a megalomaniacal lunatic running for president, that there’s no way politics won’t work their way into this particular hunt.”

GISHWHES, Collins explained, isn’t just a scavenger hunt. “It’s also kind of an art project and also a bit of a social experiment and a very disruptive and whimsical enterprise.” The list is formulated to have options suited to everyone and anyone: arts and crafts, public merry-making, fashion design, crochet, calling NASA. The goal is for everyone to be able to find something they can go for and enjoy. And boy, do participants go for it! Last year some hunters managed to get a mountain named GISHWHES…on Mars.

How do you prepare for GISHWHES? Well, my team has been hoarding dryer lint for a few months, but you can never be truly ready. Along with rest and carbo-loading, Collins suggests it’s a good idea to have access to a Stormtrooper, which is always part of at least one item, and noted that some teams keep a list of interesting people and specialists to contact. Many people participate just to join in the fun, not necessarily to come out on top—but even if you are in it to win, don’t be intimidated by celebrity teams or daunting challenges (like getting a city skyscraper to spell out GISHWHES). A member of last year’s winning team told me that being successful isn’t about doing all the big things, just doing as much as you can with as much passion as possible.

“Gishing” isn’t just about skywriting and covering children in popcorn. It’s about showing participants how fun charity work and random acts of kindness can be, as well as spreading whimsy throughout the world. GISHWHES no longer ends with the hunt, what Collins called “one week of intensive experience.” A previous item was a design for a teahouse that eventually ended up in Los Angeles’s Griffith park as a piece of guerilla public art. Last week saw the introduction of the GISHbus, a kooky, mobile VIP longue for frequent Gishers (who earn ‘Gish points’ through hunt participation) to enjoy. Many other surprises are on the horizon, possibly including a GISHWHES app and more mini-hunts. Says Collins: “We have an aspiration to create a bit of a community around GISHWHES that remains in conversation with itself over the course of the year. There’s lots of little games that we can play throughout the year.”

Registration for GISHWHES is still open, and Collins hopes that as many people as possible sign up to ensure maximum mayhem, fun and kindness. So, get over to GISHWHES.com and give it a try. I guarantee that you’ll have more fun than you ever thought possible. Once you’re done, you can catch Collins on the record 12th season of Supernatural, which premieres October 13th on the CW and will include Collins’ 100th episode.