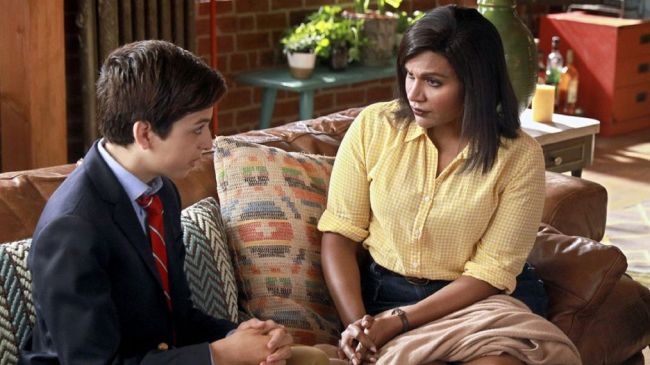 While we’re excited to see her in the upcoming Disney blockbuster, A Wrinkle in Time, we’ve been just as excited to see when and how Mindy Kaling would be coming back to television comedy now that The Mindy Project is no más. We don’t have to wait too much longer. Her latest show arrives this spring!

It’s a new NBC comedy called Champions, and it was created by Kaling and Charlie Grandy, with whom she’s worked before on The Mindy Project, as well as The Office and Saturday Night Live, both also for NBC. So, the pedigree is promising, but what about the show itself? Kaling premiered the show’s first trailer via her Instagram:

Meet the @nbcchampions on March 8th! They’re the best, and I’m definitely not biased #Champions

In it, we get to know Vince (Anders Holm), the owner of a gym called Brooklyn Champions who seems to live a life of jockishness and sleeping around with women, and … not much else. He lives with his brother, Matthew (Andy Favreau), and seems perfectly content to have zero other ambitions. That is, until he gets a blast from his past. A former high school fling Priya (Kaling) arrives with her teenage son Michael (J.J. Totah). Spoiler alert: he’s Vince’s kid.

My initial response to the trailer was Awww, this looks cute! And yay for musical theater references!

But because my job has made it nearly impossible for me to watch anything without a critical lens, here are my more nuanced thoughts about this show:

As I think about my first con—that the show focuses on a male protagonist—I feel the need to check myself a bit. Part of gender parity in the television industry is that women shouldn’t have to just write the “woman parts” or the “women’s shows.” Women should be able to write about people of any gender the way men always seem to get to do.

I’ve also learned to have faith in Kaling when she tells a story. After all, when I first started watching The Mindy Project, Mindy Lahiri annoyed the fuck out of me, and I was so angry at Kaling for giving us this shallow, ditzy woman who was “supposed” to be a doctor … until I realized that I was basically “Elle Woods-ing” her. I was falling into the trap that says that in order for women to be competent, they can’t prioritize “frivolous” things, or be overly “girly” or have glaring weaknesses in other areas.

The Mindy Project worked so well, because its female protagonist was constantly under examination, flaws and all, to say larger things about femininity and sexism. My hope is that Champions will do the same.

My other hope? That Champions will hire female writers other than Kaling.

What do you think of this trailer? Will you be watching Champions when it debuts on NBC on March 8th?