Garbage human Milo Yiannopoulos is on a university tour and, surprise, it's not going well. 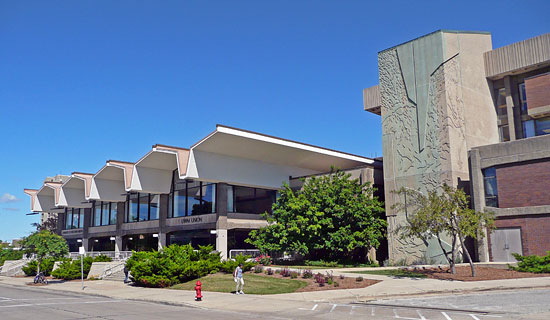 As much as it pains me, I’m about to write some words about Milo Yiannopoulos. I know, ugh, but please bear with me, because this “alt-right” (or, if we want to call things by their appropriate names, this white supremacist) poor excuse for a human walks that line between “Just ignore the trolls” and “No, this is what happens when you ignore the trolls, and it’s despicable,” with a strong lean towards the latter, at best.

For the last few months, Milo—who, if you are somehow blissfully unaware (first of all, please stay that way and stop reading, turn back now and save your innocence), is a major Breitbart mouthpiece of awfulness—has been on his “Dangerous F*ggot Tour,” visiting colleges and universities across the country who are, for whatever reason, not ashamed to pay his appearance fee and have his name associated with their school. Here are just a few titles of Milo’s recent speeches:

What a cool guy, right? A few schools have rescinded their invitations on the grounds that, after a few protests at some of his events, the extra security needed would be too expensive. If that’s true, that’s fine, but if the schools had also decided they didn’t want to invite a hateful bigot to campus, well, it sure would be nice if they’d actually just say that. Because it’s not like the presidents and chancellors and student unions and all the rest of the organizations at these schools don’t know who Milo is. They know, and they’ve confused hate speech with free speech.

For more than a month before Milo was scheduled to visit the University of Wisconsin-Milwaukee earlier this week, students were reportedly protesting the appearance. They protested, they complained, and they told the school they didn’t want Yiannopoulos given a platform to spew his hate. And the school didn’t listen.

And then 49 minutes into Milo’s hour of hate, Overpass Light Brigade reports that he shared the picture and name of a transgender student, and proceeded to mock her appearance, her “fuckability,” and her desire to use the women’s restroom. That student, by the way, was in the audience of Milo’s event, to be blindsided firsthand by his ultra-public mockery. The school’s chancellor immediately released a statement telling the student body, “I will not stand silently by when a member of our campus community is personally and wrongly attacked … I am disappointed that this speaker chose to attack a transgender student.” To which the student in question wrote back, and I quote, caps and all, “GO FUCK YOURSELF.”

The student’s letter to the chancellor, which was CC’d to more of the school’s faculty and staff, is long and profanity-laden (NSFW if you have a boss that likes to look over your shoulder), and it is 100% unabashedly messy, targeted rage. The entire thing, with the student’s name redacted, has been republished on the Overpass Light Brigade, and I highly recommend reading it in full.

Here, though, are a few eviscerating highlights:

Your email? I don’t even know where to begin. Also, I don’t care if you feel “offended” or “harassed”. Welcome to my life. Sue me. I’d be more than happy to defend my free speech in court (since this is what you call it apparently) to lambast your ass for being an ungodly, fucking pathetic “ally.” And quite frankly I don’t care who the fuck reads this email (as you can tell by the CC) or what people think of me. I’m aware of where this email can end up. So be it. My “give a fuck card” was thrown out the window a long time ago. I’m going to write about you and YOUR fucked-up bullshit.

The student has no patience or appreciation for the chancellor’s mass email (with no attempt to reach out directly to her personally), when she sees no possible world in which any thinking person wouldn’t have seen this kind of attack coming. This is what Milo does. It’s pretty much all he does.

She went on to ask if Chancellor Mone would invite a “modern Hitler” or David Duke to campus, since “free speech” seems to be his greatest concern. Mone, by the way, reportedly earlier called the police on a group of students carrying a petition to keep Milo off campus. So when he then responded with that mass email, stating support for the student and all students, encouraging the use of the hashtag #UWMstandstogether, this student had some legitimate rage.

Good grief…UWM “stands together”…as you fucking call the police on students who tried to petition you…as you divide and attack marginalized students while saying you want unity…as you allow a fascist to use “free speech” as an pretense to harass and attack. The amount of doublethink here is just incredible.

And we’re supposed to respond with positive messages, not anger? WHAT FUCKING WORLD DO YOU LIVE IN. Do you have any idea how much fucking privilege you have to even BEGIN saying something like that? WHAT. THE. FUCK. You do NOT get to dictate how we feel. You do NOT get to tell us what our emotions should be. Oh but okay, here’s a positive message: Nobody died! WOO-FUCKING-HOO! Positivity! Go Panthers!

Fuck no. I am done getting repeatedly abused and shit on, and expected to just take it and not be angry. But don’t worry, I’m not angry. I’m way, way beyond that. I am SO FUCKING DONE having to justify my humanity to shitheads like you all the fucking time. Angry bitches get shit done. You say to not respond with “anger”…goddamn you haven’t the slightest fucking clue what pervasive marginalization is like.

Again, the entire letter is very long and worth reading in full, although to do so is painful. She describes in great detail the fear of  being in that room, and in line to get into the event, while the men in front of her made transphobic comments, not realizing she herself was trans as they then checked her out. She describes the fear of simply being in that room in the first place, when her picture suddenly appeared on screen in front of hundreds of people, and thousands more as the event was being livestreamed on Breitbart. Can you possibly imagine?

By the way, did you hear last month that Oxford Dictionary’s official word of the year was “post-truth“? That was the word they decided defined 2016 more than any other. We are living in an era of post-truth, of fake news, of dangerous bigots being rebranded the “alt-right.” Now, maybe more than any time in recent history, words matter. The difference between hate speech and free speech is perhaps a thin one, and therefore one that needs vigilant attention. And those with power and access to public or large private platforms (like, say, a university chancellor) deserve to be held accountable when they forget the power, and the danger, of the words spewed by terrible humans.