What do you think Mojang will build with all that gold? 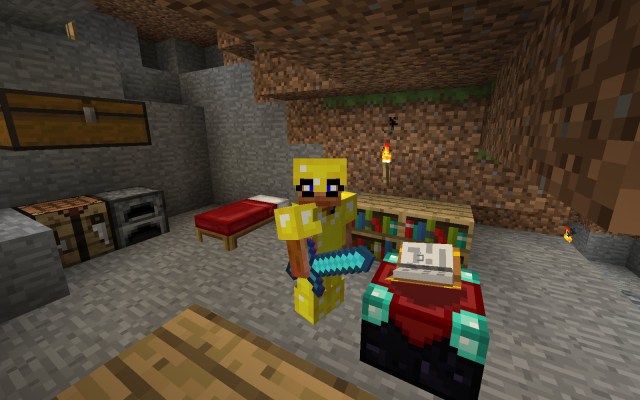 Reports were creeping around the Internet last week that Microsoft was looking to buy Minecraft developer Mojang, along with the game itself, for $2 billion. The sale is now officially happening with an even ridiculously higher price tag of $2.5 billion, and we’re one step closer to every tech company just buying every other tech company until there’s a giant tech mega-corporation that rules the world… and builds everything out of poorly-textured cubes.

Also true, as it turns out, were the rumors that said Minecraft creator Markus Persson, better known as Notch, would be leaving Mojang following the sale. According to Persson himself, he really hasn’t been that involved with Minecraft for a while, and he never intended for it to be such a huge success, which is part of why he’s leaving Mojang for new things. He wrote on notch.net:

A relatively long time ago, I decided to step down from Minecraft development. Jens [Bergensten, Minecraft‘s current lead developer] was the perfect person to take over leading it, and I wanted to try to do new things. At first, I failed by trying to make something big again, but since I decided to just stick to small prototypes and interesting challenges, I’ve had so much fun with work. I wasn’t exactly sure how I fit into Mojang where people did actual work, but since people said I was important for the culture, I stayed.

I was at home with a bad cold a couple of weeks ago when the internet exploded with hate against me over some kind of EULA situation that I had nothing to do with. I was confused. I didn’t understand. I tweeted this in frustration. Later on, I watched the This is Phil Fish video on YouTube and started to realize I didn’t have the connection to my fans I thought I had. I’ve become a symbol. I don’t want to be a symbol, responsible for something huge that I don’t understand, that I don’t want to work on, that keeps coming back to me. I’m not an entrepreneur. I’m not a CEO. I’m a nerdy computer programmer who likes to have opinions on Twitter.

As soon as this deal is finalized, I will leave Mojang and go back to doing Ludum Dares and small web experiments. If I ever accidentally make something that seems to gain traction, I’ll probably abandon it immediately.

Minecraft‘s explosive success from its humble indie beginnings were a surprise to everyone—even its creator. That huge success and public spotlight are not only why Persson is leaving, but also the reason he thinks Microsoft is a good fit for the sale: To flourish, the game needs a company with huge resources, which Mojang apparently decided Microsoft needed to prove with the insane sale price.

Mojang also confirmed today that its other two founders, Carl Manneh and Jakob Poser, will also be leaving the company following the sale, but Jens Bergensten will stay on as lead developer of Minecraft. As for Minecraft itself, Microsoft has no plans to cut into its popularity by limiting it to Microsoft platforms. Head of Xbox Phil Spencer wrote about the sale on Xbox Wire:

Minecraft adds diversity to our game portfolio and helps us reach new gamers across multiple platforms. Gaming is the top activity across devices and we see great potential to continue to grow the Minecraft community and nurture the franchise. That is why we plan to continue to make Minecraft available across platforms – including iOS, Android and PlayStation, in addition to Xbox and PC.

To translate PR speak: “Minecraft sells like crazy, and we’d have to be insane to pay this much for it and then limit it to our Xbox and PC platforms, which pretty much everyone hates.”

It doesn’t seem like Persson would have cared either way, though, as long as he doesn’t have to deal with it anymore. No matter what anyone adds to it in the future, he finished Minecraft a long time ago, and the future of the game is in the hands of Microsoft and its fans now. Persson wrote:

I love you. All of you. Thank you for turning Minecraft into what it has become, but there are too many of you, and I can’t be responsible for something this big. In one sense, it belongs to Microsoft now. In a much bigger sense, it’s belonged to all of you for a long time, and that will never change.

(via Polygon, image via Mike Prosser)