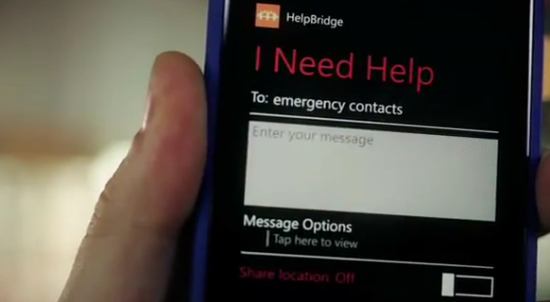 When a disaster strikes, it’s good to be prepared. Having a plan in place to quickly contact your loved ones and tell them you’re okay — or to tell them you aren’t — can go a long way during the first hectic minutes of a tragedy. Microsoft wants to help people streamline their emergency contact plans with their new HelpBridge app. It can quickly post to Facebook, send texts, or email contacts if you’re in an emergency. If you’re not the one in the middle of an emergency, HelpBridge lets you easily donate when disaster strikes elsewhere.

There are already quite a few apps on the market that let users send mass texts or emails at a moment’s notice, but HelpBridge provides more features than simply sending out messages simultaneously. To set up the app users add a list of emergency contacts from their phone’s contacts. When I tried this there were some names missing from the list of contacts, most notably my wife’s.

To test it out, I added my parents as my emergency contacts and selected the “I’m OK” option, then I typed the message “Testing an app for work. Everything is fine. Love you. – Glen.” HelpBridge brought up the usual messaging app on my Galaxy S III with my parents’ names as the recipients and the message pasted into the text box. In seconds after hitting “send” I received an “XO” text from my dad and saw that my message posted to my Facebook wall with a picture that says “I’m OK” and a link back to HelpBridge’s site.

After assuring everyone that I was perfectly fine, I selected the “I Need Help” option in HelpBridge and typed the message “I do not need help. Just testing an app for work. I appreciate your concern. Love, Glen.” and hit send. Again, the SMS message went out to my parents and HelpBridge posted the message to my wall with a link and a picture saying, “I need help.”

What really separates HelpBridge from other “panic button” apps is that it also makes it very easy to donate to charities quickly after a disaster. Microsoft partnered with a number of charities to allow users to easily text small donations, and even allows for larger donations through PayPal within the app.

In practice, the app isn’t as much of an actual “panic button” as I was expecting it to be. There are a few steps between hitting the “I need help” button and your message going out, but the added features kind of make up for that.

The major issue with the app is that it currently only works in the U.S. though we imagine Microsoft will quickly expand that. After all, disaster can hit anywhere. One smaller thing that is noticeably missing is Twitter integration, and I wouldn’t be surprised if they added it eventually.

Overall, HelpBridge has the potential to be an integral way people communicate in an emergency, but still feels a little rough. I installed it for the sake of this article, but I’ll keep it on my phone just in case.