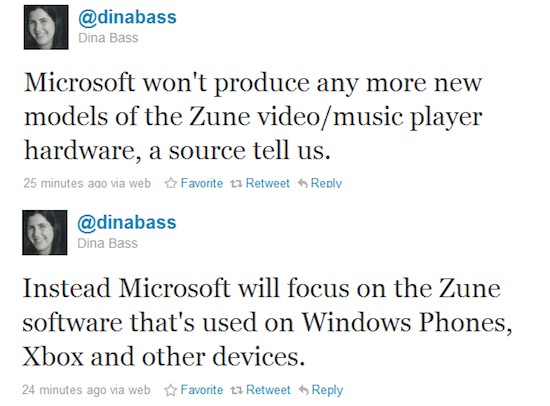 According to reports, Microsoft’s attempted answer to Apple’s iPod, the Zune, is being discontinued. Like with Nokia’s old N-Gage hardware, the Zune isn’t being entirely discontinued, though, as it lives on in software form across various lines of mobile phones and other devices. Bloomberg News tech reporter Dina Bass Tweets that the hardware is being killed off, Microsoft watcher Paul Thurrott reports the same,  and coupled with this article from a month ago regarding Microsoft and Nokia’s partnership, which mentions how the future of the Zune was mysteriously left out of Microsoft and Nokia’s future plans, it seems the Zune has finally passed on.

WinRumors asked Microsoft about the reports regarding the Zune being discontinued, to which they responded:

“We have nothing to announce about another Zune device – but most recently have introduced Zune HD to Canada via Zune Originals store and remain committed to supporting our devices in North America. We are thrilled by the consumer excitement for Zune across many new platforms, including Windows Phone 7 and Xbox 360. Our long-term strategy focuses on the strength of the entire Zune ecosystem across Microsoft platforms.”

At least Microsoft’s answer to the iPod will be living on in software spirit with its N-Gage brethren.