First Lady Michelle Obama Surprises Guests on The Tonight Show, They Cry, We Cry, We All Cry Forever 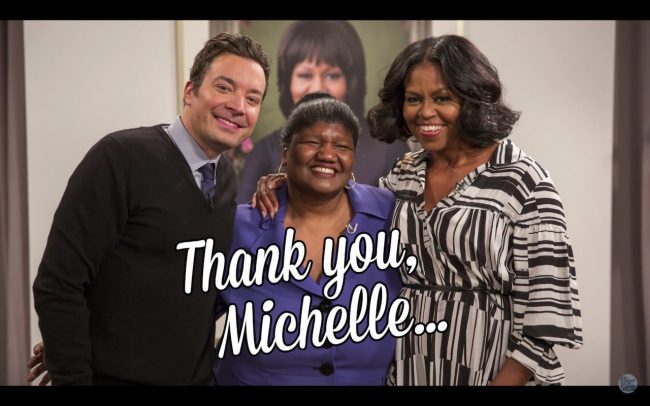 One of the hallmarks of the Obamas’ time in the White House is their awareness of how important it is to connect with different generations of Americans on the platforms where they can be found. President Obama has done his fair share of appearances on various late night talk shows and the like, and so has First Lady Michelle Obama.

In fact, this latest appearance of the First Lady on The Tonight Show was packed with plenty of bittersweet moments, not the least of which is this entire segment where she and host Jimmy Fallon surprised random strangers who stopped by to record a thank you message to a portrait of Michelle Obama, which I’m assuming they promised would be sent to her directly. Of course, she and Fallon were standing just behind the photo, and they listened in as people shared their heartfelt thanks and touching stories about what her First Ladyship has meant to them.

Nearly everybody involved thanked her for being such a strong, supportive role model for either themselves of the people they knew. It’s interesting that so many people braced themselves to profess such thanks even to just a portrait of the First Lady, and while I guess the other cameras in the room didn’t help ease their anxieties, either, I’d like to believe that there was at least some heavy emotion at play even before the surprise was revealed.

I should have warned you about this up top, but oh well: the video could very well make you tear up or even outright cry. So if you’re at work and you’d like your co-workers to not see you in such a condition, then keep that in mind. Otherwise, cry away, friends. Lord knows I am.

After that video, you can go ahead and check out another segment from the same show where the First Lady joined Fallon in his “Thank You Notes” segment, where he sends thank you notes to various people on-air.

Many of the First Lady’s notes went to the various programs she helped establish over the past eight years (including Let’s Move and Reach Higher), but she of course led off with a really well done tribute to her husband, the President, Barack Obama. “Thank you, Barack, for proving you’re not a lame duck, but my very own silver fox.” Mic. Drop.

Honestly, the segment should’ve ended right there, but I’m a little glad it didn’t, as all of Fallon’s notes were dedicated to the First Lady.

I’ve said it before and I’ll say it again: I’m going to miss catching the Obamas on television. Though if the lead-up to the Thank You Notes video is any indication, maybe Michelle Obama needs her own late night show… !