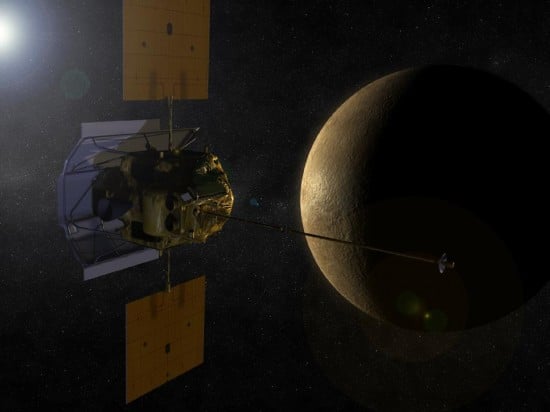 NASA’s MESSENGER (believe it or not, it stands for MErcury Surface, Space ENvironment, GEochemistry and Ranging) probe entered orbit around Mercury last night, making it the first manmade object to ever do so. Now in orbit, MESSENGER will be observed for several days to see how the craft performs in the harsh environment so close to the sun. Onboard scientific instruments will be activated on March 23, with the scientific mission beginning on April 4.

The journey has not been an easy one. Mercury travels at about 106,000 mph, which is much faster than Earth. Just to catch up with the planet, the probe had to gain 65,000 mph. In order to achieve such a feat, NASA mission planners plotted a roundabout course around Venus and Mercury, using the planets’ gravity to speed up the craft. The final flight plan covered 5 billion miles, and 15 loops around the sun.

Not much is known about the innermost planet of our solar system, which has been visited only once in 1974 by Mariner 10. Scientists are hoping MESSENGER will give them a greater understanding of Mercury’s composition, and its curiously strong magnetic field. Though it has just entered orbit, MESSENGER made some surprising discoveries during a 2008 encounter with the planet: Large amounts of water in the planet’s exosphere.

Now that the craft is in place, the real work can begin. Given what MESSENGER has discovered already, it’s shaping up to be an exciting mission. And, of course, you can follow mission updates through the MESSENGER Twitter.