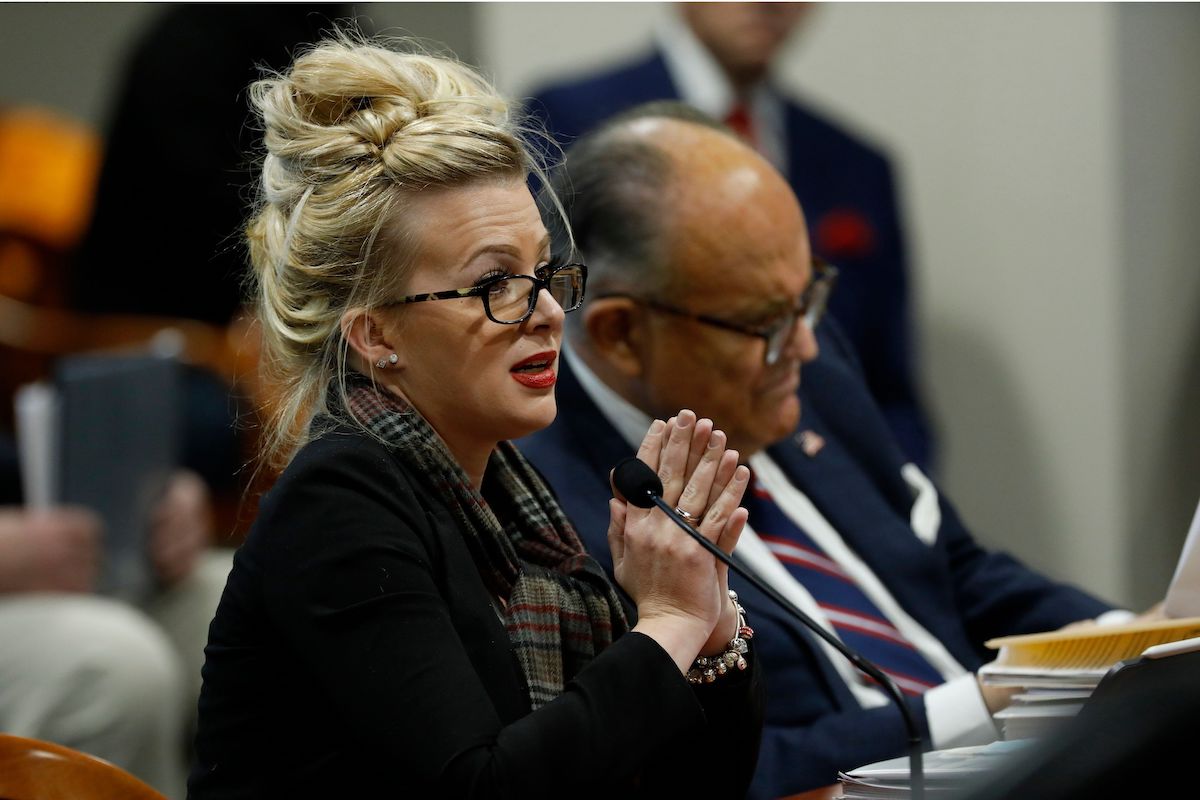 Melissa Carone went viral last week thanks to her bizarre testimony to Michigan lawmakers, appearing as a witness in Donald Trump and Rudy Giuliani’s continued baseless attempts to prove the existence of widespread voter fraud.

Carone, a contract IT worker for the voting machine company Dominion, is the IRL embodiment of Cecily Strong’s Saturday Night Live character “The Girl You Wish You Hadn’t Started a Conversation with at a Party,” so it wasn’t surprising when Strong played her in that week’s SNL cold open. If you didn’t catch Carone’s testimony, Strong’s impression is barely an exaggeration of her hostile, indignant, seemingly blitzed performance.

During her appearance before state lawmakers, Carone sat next to Rudy Giuliani for about half an hour, neither of them wearing masks. Now that Rudy Giuliani (and Jenna Ellis, who was also present and maskless) has tested positive for COVID-19, Carone says she’s “not concerned at all” and doesn’t plan to self-isolate or even get tested herself.

The county health department has issued a mandate that anyone who didn’t wear a mask during those congressional proceedings must quarantine, but Carone is apparently refusing to comply. The only person she’ll listen to on the subject is Donald Trump, or maybe one of his favored mega-conservative “news” outlets.

“I would take it seriously if it came from Trump, because Trump cares about American lives,” Carone told the Washington Post, adding that if a network like One America News or Newsmax “told me to go get tested, I would do it.”

“It is not that I don’t believe in getting tested,” she said. “I don’t trust the tests.”

The Washington Post doesn’t elaborate on why exactly she doesn’t trust the tests but in another interview on SarahPalin.com (seriously), Carone claims that the coronavirus was created in a Wuhan lab funded by Barack and Michelle Obama.

(By the way, every line in that now-deleted, still archived interview is an absolute symphony of nonsense. Here’s my favorite bit: “So why are they mocking this granddaughter of a Baptist preacher so much? What happened to the Me Too movement? Aren’t we to ‘believe all women’? Instead, Carone is called every name in the book. Her brains and looks are torn apart online. Often other women are the abusers. Why are they spending so much time attacking a 5’1″ Midwestern mom?” Just an absolutely stunning display of ignorance across the board.)

In yet another interview (she’s been on a spree this week), Carone told Inside Edition that, despite every commonsense indication to the contrary, she wasn’t drunk during her testimony. “That’s my personality,” she explained.