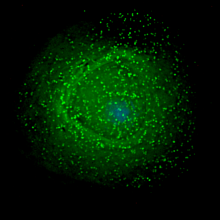 Scientists at Johns Hopkins University say that they’ve developed a method that strips the AIDS virus of its deceptive abilities and could potentially allow the human body to fight off the disease. The research, published in the journal Blood, is a tantalizing breakthrough that researchers hope could someday lead to an effective vaccine against the disease, which kills about 1.8 million people every year.

The new research is based on how the virus disguises itself from the human immune system and disrupts that system’s ability to communicate effectively. The virus accomplishes this by stealing cholesterol from the “first responder” cells called plasmacytoid dendritic cells (pDCs). These cells normally signal T-cells, the body’s heavy artillery, to defeat invaders. Instead, the AIDS virus “reprograms” pDCs to become hyperactive, which in inhibits the body’s ability to fight off the virus.

This new technique removes that cholesterol envelope from the virus, leaving the virus more or less defenseless. Researchers say that in their laboratory experiments, when the cholesterol shield is removed, the immune system attacks and neutralizes the diseases as if it were any other foreign body. It should be noted that the type of cholesterol used by the virus and targeted by the researchers is different than the “bad” cholesterol that causes heart problems.

Unfortunately, this research is still very new. So far, no animal or human testing has been performed — a crucial step in determining the efficacy of this treatment. It’s worth noting, how some commentors on Reddit already have, that AIDS is a notoriously difficult disease that has resisted attempts at developing a vaccine. However, this treatment is different as it does not attempt to bolster the T-cells as most other potential vaccines have. Instead, scientists hope to combat AIDS at the point where it first engages the human immune system, before it can degrade the body’s defenses.

Given that the research is so new and the uncertainty about how it will work once in a living organism is great, grains of salt are certainly needed. However, the successes claimed by the research are sure to bolster hopes that AIDS could one day join the annals of vanquished diseases.

(Voice of America News via Slashdot, image via Wikimedia)