The Wait is Over: Meet the Pyro is Here! | The Mary Sue

Christmas, Halloween, and Your Birthday Rolled into One: Meet the Pyro is Here! 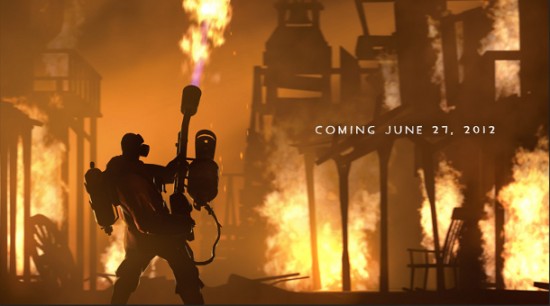 Break out the champagne and light it on fire! The moment we’ve all been waiting for is finally here! We all waited with bated breath as the Pyromania clock ticked down to  zero. We cursed in agony as Valve’s servers buckled under the weight of more than 90,000 players trying to access the video all at once. But we saw it. We saw “Meet the Pyro.” Were our lives changed forever? Will yours be? Was this all a hoax to promote more of Valve’s confounded hats? Read on to find out!

For those of you who haven’t been following this obsessively: Here’s the scoop. Valve, the game development company behind Portal, Half-Life, Steam, and Left 4 Dead, began releasing videos on their website introducing each of the playable classes from their multiplayer shooter, Team Fortress 2. It’s been over a year since the release of “Meet the Medic,” the second-to-last of these videos. The only class that had not been introduced was the Pyro, a flamethrower-wielding, mask-wearing juggernaut shrouded in mystery. We waited and waited for the final video, to the point of believing that it would never come. Valve was like that kid on the playground who had the Martian Man Hunter action figure that you needed to complete your Justice League of America set, but he wouldn’t trade it to you even though he knew that you really wanted it and he didn’t like Justice League nearly as much as you did.

For the last few weeks, speculations ran wild. The buzz was that there would be an announcement on Friday, the 22nd. The day came, but all we got was a cryptic cryptic post from Valve. I thought that Valve had duped us once again. Some folks online claimed that the post was actually Morse code reading “Monday.” I found that a little hard to believe; but, lo and behold: On Monday, the 25th, Valve announced what they were calling “Pyromania” with the promise of the long-awaited video’s release on Wednesday.

Well, here we are. The day has finally come and “Meet the Pyro” is finally here. I want to avoid giving too much away but, suffice it to say, the video is full of surprises, not the least of which comes at the very end of the video. This is one heck of a video, ladies and gentlemen. Enjoy!