Medieval Times Movie Getting Made | The Mary Sue

Hollywood Thinks You Will Literally Watch Anything, So Now You’re Getting A Medieval Times Movie 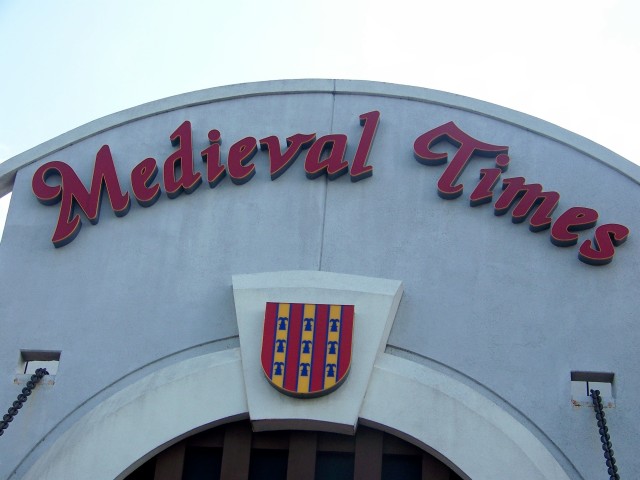 Hey, Game of Thrones fans! You like swords and feasting, right? Have we got a film experience for you! Medieval Times, the nine venue-strong entertainment chain that brings all the best parts of the Middle Ages like jousts and funny hats to live audiences across the country may soon be coming to a theater near you, and it’s bringing metric tons of cross-promotion potential with it.

Two things should be clear while reading this article. One, I love movies. And two, I love Medieval Times, the only restaurant where it’s acceptable behavior to eat half a chicken with your hands while cheering on grown men locked in a fight to the death. Okay, you can also do that at most Denny’s locations in the small hours of the morning, but you have to go all the way out to the parking lot and the combatants typically lack the anachronistic charm of trained performers in full armor.

With those things in mind, it is also worth noting that there are a grand total of zero compelling arguments for making a Medieval Times movie. These people are officially just screwing with us now. They know they don’t even need to make movies anymore. They just need to buy a brand and throw Channing Tatum into it until he is one day ground to chunky resin by the process.

As Hollywood continues its desperate search for the the bottom of the bucket that houses its collective artistic integrity, some odd things are bound to come out of that bucket. At some point, though, we have to assume (Hope? Pray?) that some of those things signal the approach of bedrock in this race to the bottom. I don’t think it’s unfair to firmly place “a Medieval Times movie” on that list, and considering a pair of production companies just closed the deal squaring away the cinematic rights to the medieval-themed entertainment extravaganzas, it’s safe to assume the ground floor is coming up in short order.

Look at it this way: Several people — people with some degree of clout in the film industry and control over millions of dollars in budgets, presumably — sat down and decided “Yes, a movie inspired by a medieval-themed restaurant and theme park is a great idea!” I think we can all agree that this is not the act of a well person. But considering where people will probably go watch it anyway, can we really say that they’re wrong? Perhaps, in a world gone mad, making a Medieval Times movie is a sane, rational act.

If this is the case, someone needs to stop the world because I need to get off and catch my breath. Really, just for a moment. I’ll be back. Promise.

Oh, one more thing to note — if the studios involved immediately hand this over to Christopher Guest to make this a comedy that offers us an insider’s look into the world of medieval theme restaurants and semi-professional jousting, I will immediately and without reservation rescind any and all criticism and wait for that film with no small degree of anticipation. Just saying.