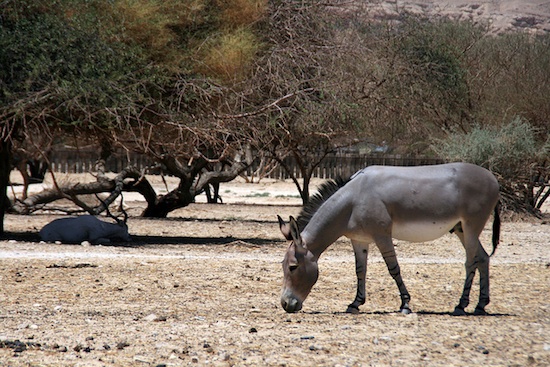 At Israeli theme park Kfar Kedem, you can get a realistic taste of what it was like to live in biblical times. This was a simpler era, when there were no antibiotics, being stoned to death was a very real possibility, and livestock just strutted around city streets like they owned the place. Yes, living in biblical times sucked. The managers of Kfar Kedem seem to have acknowledged the problems inherent in building a theme park around the idea of visiting a time when everything was just measurably worse than the world we actually live in, and have begun adding some modern amenities to the experience. Now, when you visit Kfar Kedem, the donkey you are riding around the park will also be a convenient Wi-Fi hotspot. Just like in the Bible!

Kfar Kedem is staffed by performers reenacting scenes of daily life in Galilee from biblical times. Tourists can see what life was like, and even join in, helping to bake bread and press wine, among other activities that sound just awful. Many visitors are foreign tourists looking for an authentic experience in ancient living, except without the part where you die of a wasting disease at 32. And really, what is the point of pressing your own olive oil if you cannot also share your newfound knowledge of ancient customs on Instagram?

Roaming charges can make it prohibitively expensive for tourists to upload those pictures of themselves riding a donkey that are sure to make all their friends just green with envy. In the interest of making it easier for visitors to share experiences from their trips in real-time, five of the park’s 30 donkeys have been equipped with wireless routers, turning them into roaming Wi-Fi hotspots that also occasionally poop in the street.

We can only hope this innovation comes to America’s own old-timey theme parks soon. Medieval Times, consider the gauntlet thrown. Every day that one of your barding-clad steeds does not provide us with high speed Internet access so that we can upload streaming video of fake knights crashing into one another is a day you have fallen behind in the burgeoning “equine hotspot” arms race.