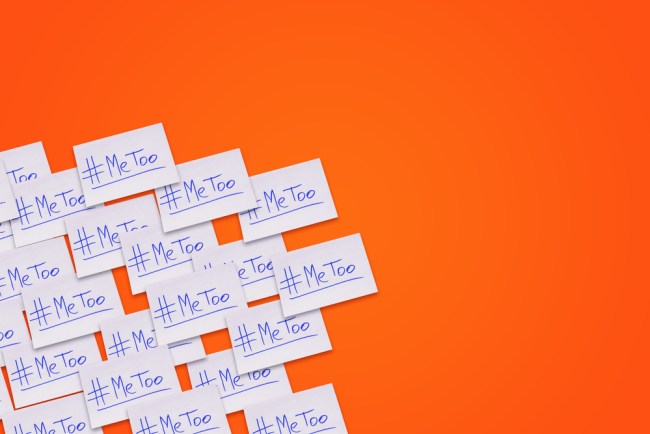 Since this current awards season has been dominated by conversations regarding #MeToo and #TimesUp, I’ve found myself repeatedly surprised by how many men seem ill-equipped to respond to questions on the subjects of sexual harassment and abuse in their industry.

Male actors and other Hollywood players are, likely, unaccustomed to being asked these questions in the first place. While women certainly should be at the center of this conversation, they have also largely been asked to answer for men’s behavior. It’s why women are asked about their feeling on Woody Allen, but men, for the most part, are not. (Some men have chosen to volunteer their feelings, but are asked to supply them far less.)

It’s why Alison Brie was asked during a red carpet interview to comment on allegations against her brother-in-law James Franco, but James and Dave Franco were not.

So I get it, men aren’t used to having to answer questions like “would you work with this alleged serial abuser again?” or “what are your thoughts on the women coming forward against [name a dude, take your pick]?”

However, in the last week, there’s been a surplus of headlines recounting quotes from male celebrities whose lack of thought on these issues is surprising. It’s not like they don’t know by now that these questions are a possibility. And it’s most definitely not like they don’t have publicists and managers coaching them in their interview soundbites, especially during an awards season.

William H. Macy Says 'It's Hard to Be a Man These Days' in Wake of Time's Up https://t.co/Ur6t1cpEyK

Those are all awful quotes, but what’s most upsetting is that if you read past the headlines, some of the quotes are presented horribly out of context. For example, Joel McHale said pretty much exactly what that headline states. He was quoting Ashleigh Banfield, who wrote the pseudonymous “Grace’s” story off as a bad date, but he agreed,  “If someone had a bad date, then it was a bad date.”

Soderbergh, on the other hand, was saying pretty much the opposite of how that headline makes him sound.

This headline makes it sound like he's cheerfully complicit rather than openly discussing how the men in his industry are. This is what he actually said: 'Men being men, as opposed to changing their behaviour, may stop hiring women' https://t.co/O9ob98tXbT

(William H. Macy, for his part, seemed to fall somewhere in between. He seemed mostly to be clumsily inarticulate and inexcusably unprepared.)

It can be difficult to cram a nuanced sentiment into headline length, but some of these seem to suffer more from a deliberate flattening. It’s the clickbaitification of the #MeToo movement.

While it’s important for men to have to think about these issues, it’s also necessary for those asking the questions to do so with care and respect. I’m not talking about care for the feelings of those being asked (although I would hope that’s a given) or for the accused. I’m talking about respect for the victims of sexual assault and harassment, who should be at the center of these questions but instead, are often not even an afterthought in the quest for salacious stories.

The rush to be the reporter who uncovers the next Bad Man has to remember there are real humans, real victims, at the core of that story.

The Guardian had a piece this week about the games industry’s potential #MeToo reckoning, and the hurdles that have to be overcome before that can happen. And while the headline reads “The video games industry isn’t yet ready for its #MeToo moment,” what it actually describes is an industry–or women in an industry–who are beyond ready, but who aren’t being treated with the respect their stories deserve.

The New York Times investigation into Harvey Weinstein represented over a year of work and trust-building. You don’t just pull this kind of reporting out of a hat. Women in the games industry, meanwhile, are being approached as potential leads rather than as people who might have been through something horrible.

This is a community of women that suffered through Gamer Gate, who spoke out about the demons in their industry, and who were never given the spotlight they deserved.

But now reporters are now scrambling to uncover sexual misconduct in all fields, and in the process, many are displaying a disturbing lack of interest in the humanity of the survivors they’re discussing. The woman who told spoke to Babe.net about her experience with Aziz Ansari deserved better than what she received from her partnership with inexperienced journalists. The very real women who fear career backlash or exclusion from their fields deserve better than to have all nuance removed from the quotes of their colleagues.

We’ve heard the arguments that all crimes and forms of misconduct are getting lumped together, that the #MeToo movement doesn’t respect nuance or circumstance. But this backlash, like so many things, is designed to protect the men in question.

As we keep saying, women know the difference between rape and harassment, between a ‘Weinstein” and an “Aziz.” Most of us have lifelong experience discerning the different types of creepy men in our lives; we know where the differences lie.

Reporters covering these stories need to make sure they do justice to the victims coming forward to tell them. And as the backlashers lament the “lives ruined” by a potential lack of care an nuance in how these stories are covered, they could at least ask if they’ve thought about whether that concern extends to the survivors at their center.