Why the MCU Needs to Deal With Its Whitewashing Problem 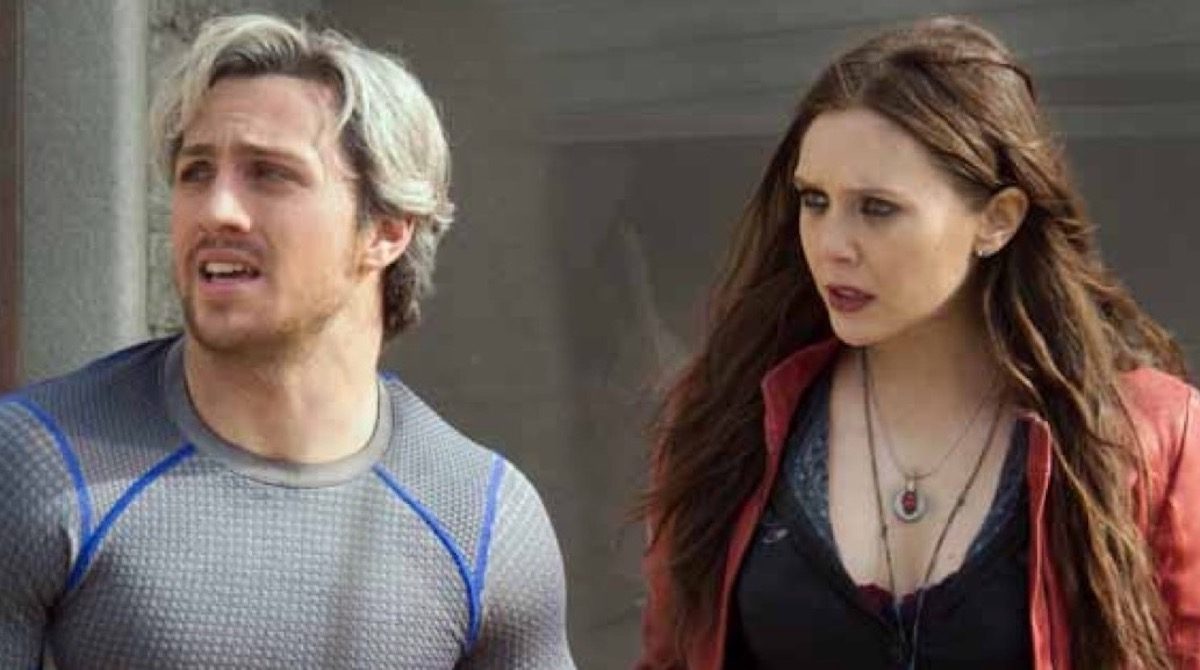 Like any true antagonist, Marvel has been busy giving us fan theory-fueled nightmares while simultaneously infiltrating every waking second of our lives. Now that Avengers 4 reshoots are well underway and Thor (Chris Hemsworth) and Valkyrie (Tessa Thompson) spent a suspiciously short amount of time on set, you’d think that we’d be busy preemptively mourning our favorite heroes, but our attention has been momentarily deviated by the upcoming Disney streaming service. Thanks, Marvel, for consuming our lives and wallets.

With the Disney service set to launch in 2019, Variety predicts that characters in MCU could bleed into Disney’s new developments, with Loki and the Scarlet Witch allegedly being a couple of the frontrunners for our impending monthly expenditure. As Variety notes, the characters’ potential series will likely star their movie counterparts, Tom Hiddleston and Elisabeth Olsen respectively. While these reports help resurrect any latent hope we had left about the future of our favorite characters, it also reminds us that whitewashing is unfortunately still alive and well in the superhero fandom.

We’re looking at you, MCU Wanda, as well as Peter Maximoff in the current X-Men movie timeline (soon to be under Marvel’s wing) and Pietro Maximoff in Avengers: Age of Ultron. Granted, the Maximoff/Lehnsherr family trees are a bit convoluted in the comics, as well as onscreen, what with the Mothersvine, the Mamma Mia-adjacent paternity trials, and the siblings’ ever-changing guardians, but regardless of their consistently retconned family tree, the Maximoff twins are still Romani in the comics.

In Marvel Comics history, the twins’ parents, Magda Lehnsherr and Magneto have always had a complicated relationship. It might not have been love at first sight, seeing as Marvel’s Ultimate universe (Earth-1610) version of Magda Lehnsherr (Isabelle) was originally on a mission to spy on the glorified metal bender, which ultimately led to Wanda and Pietro’s conception. So, Magda and Magneto were at least amicable at some point.

In Marvel’s main comic universe (Earth-616) series of events, Magneto (Max/Magnus) saves Magda from concentration camps in 1936, where she was targeted for her Roma ancestry. Like any convoluted love story, the rest is history, because Magda and Magneto later had the twins. Throughout mutant and non-mutant history—seeing as the twins aren’t necessarily mutants—Marvel Comics has changed and retrofitted Wanda and Pietro’s family.

Giant-Size Avengers #1 (1974) noted that Wanda and Pietro’s parents were Miss America and The Whizzer. Then, there was that infamous moment when Magneto impersonated Darth Vader with his “I am your father” monologue. In 2015, the comics again retconned Wanda and Pietro’s parentage with a new narrative that Django and Marya Maximoff were their real parents. 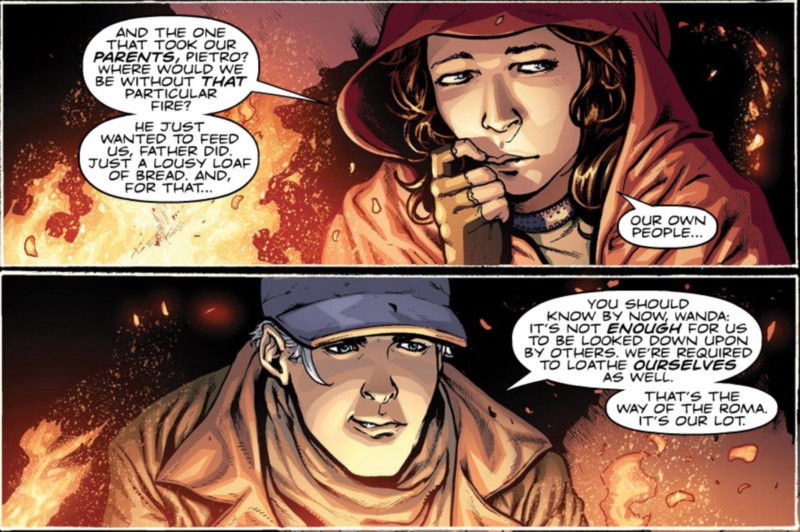 So, it’s no secret that Marvel has a habit of fiddling with Wanda and Pietro’s lineage. The Maximoff timeline is a mess, but one thing is consistent about their backstory: They’re Romani (even if they were raised by a bipedal talking cow in their early years). Their updated story arc only makes it more troubling that the MCU might continue to ignore that heritage, both in casting and on the screen.

Their comic book counterparts are riddled with vital commentary regarding how outsiders persecute and discriminate against real-life Romani people. In their Avengers Origins run, the comics use Wanda’s powers to illustrate how real-life Romani people have been persecuted and ostracized for their religion, customs, and language. Granted, this isn’t the only time Marvel Comics have connected the Scarlet Witch’s powers to living Romani discrimination.

Although Wanda and Pietro’s comic panels are laced with issues that Romani people have faced for years—and still do today—Age of Ultron and the latest X-Men trilogy have whitewashed their Roma background. Beyond contributing to Roma erasure, Age of Ultron specifically creates a disturbing spin on their chronicles. In the MCU, Wanda and Pietro volunteered for a HYDRA experiment to gain their cinematic powers. Since Hydra is basically synonymous with Nazis in the MCU and the comics, having two Roma characters join the organization, when Romani people were victims of the Holocaust, is disrespectful.

Watching two Roma characters decide to undergo Nazi experiments, when Romani people were imprisoned, murdered, and deported during the Porajmos in Europe, distances Romani from the same genocide that affected millions of Jewish people. Wanda and Pietro’s father not being Magneto anymore in the comics—which could be perceived as erasure on its own—doesn’t really make their MCU willingness to join HYDRA any less offensive.

It’s also troubling that their Roma identity was ignored at the same time as white actors were chosen to play the characters. In real life, the notion that Romani people can’t be white-passing or have white-passing kids contributes to the separation of Romani families and their children.

Throughout Europe, Romani children are taken from their birth families and placed in foster care systems, simply because they have lighter skin or hair. This racist stereotype actively dismantles Romani families and forces them to constantly validate their kinship with blood tests and documentation, but it also deprives these children, who are wrongfully placed into foster care, the opportunity to learn about their ancestry. Instead of contributing to blatant ethnic cleansing, this baby-stealing myth conduces an indirect form of eugenics by barring Romani traditions, culture, beliefs, and language from being passed on to younger generations. 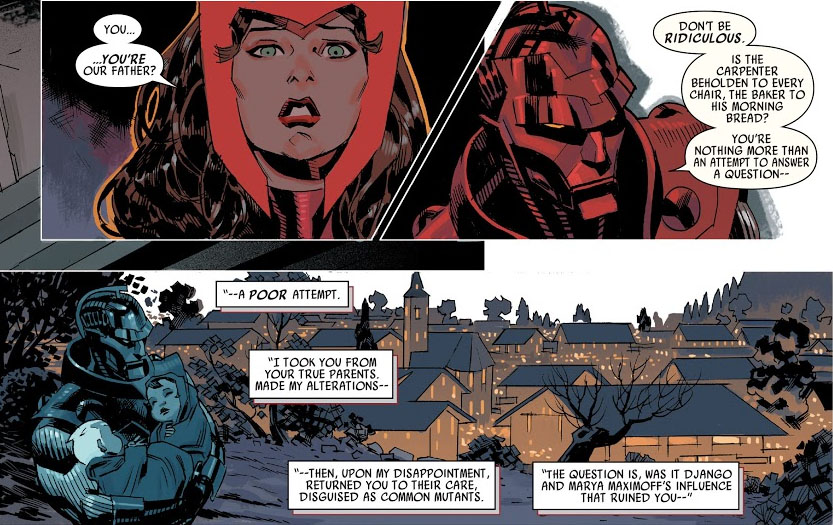 Uncanny Avengers Vol. 1 #4  details that The High Evolutionary actually kidnapped the Maximoff siblings from their birth parents, Django and Marya Maximoff, which obviously parallels the prejudice that nonfictional Romani families face. It’s a shame that parallel was omitted in the translation to film.

Continuing Elizabeth Olsen’s portrayal of the Scarlett Witch in her own television series on the Disney streaming service would continue the dismissiveness towards the discrimination that Romani people still face today. Casting an actual Roma woman to play the canonically Roma character in her potential series, and not ignoring that history, could help avoid any latent prejudice about Romani people. Recasting Wanda, Pietro, or even Magda and Nina, after X-Men: Apocalypse, might not be that farfetched. The MCU is already expecting some major changes and additions in the near future, regardless of any timeline fluctuations. It’s the perfect time.

Last week, Disney CEO Bob Iger told The Hollywood Reporter that the media conglomerate plans to incorporate the X-Men movie’s mutants into the MCU, with Kevin Feige chaperoning the union, which could signal a new cast of mutants entirely.

Nevertheless, Wanda and Pietro aren’t the only characters who’ve had their Roma heritage erased from their onscreen depictions, nor are they the only characters who have fallen prey to erasure in general. From Dick Grayson’s upcoming whitewashed portrayal in Titans on the DC Universe streaming service to the CW’s apparent erasure of Kate Kane’s Jewish heritage, the MCU isn’t the only universe that is apparently apathetic about properly representing these backgrounds. However, if the MCU rectifies its whitewashing habits, it might be able to create a sensible and accurate narrative about Romani people, played by Romani people.