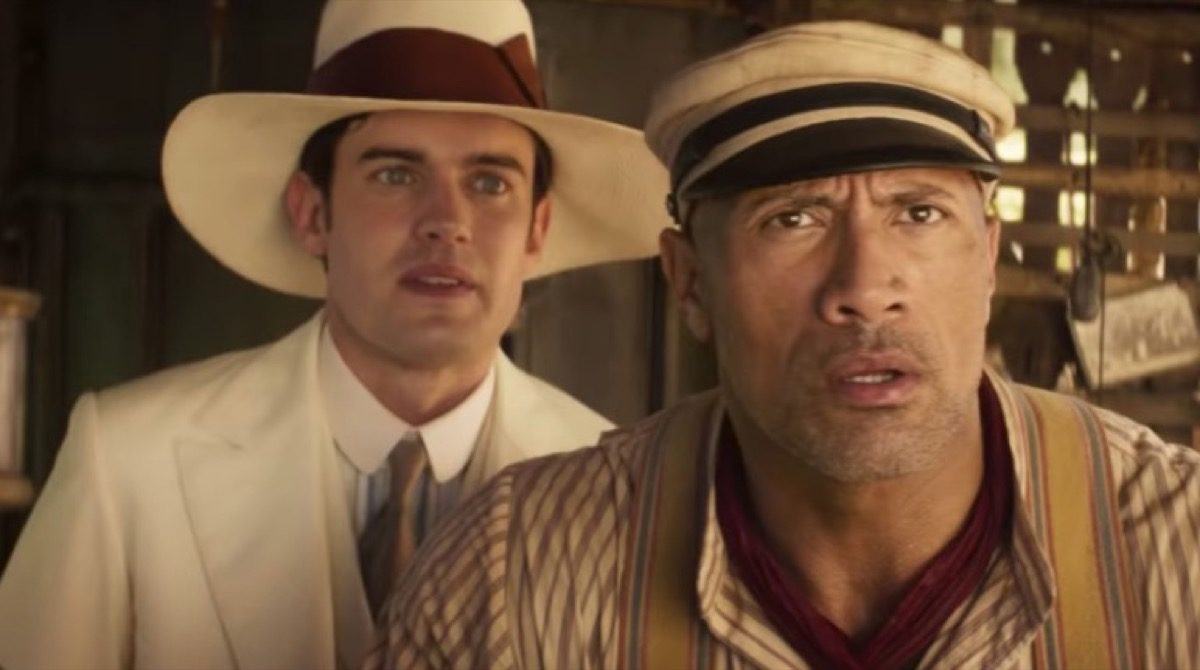 Earlier this week, Disney released the first action-packed trailer for its upcoming movie Jungle Cruise. The trailer was received pretty positively, with many pointing out connections to beloved adventure films like 1999’s The Mummy and The African Queen, as well as the possibility that Disney could be aiming to spawn another ride-based franchise to fill the gap left by Pirates of the Carribean.

Starring Emily Blunt as Lily Houghton and Dwayne “The Rock” Johnson as riverboat captain Frank, the movie looks pretty promising and filled to the brim with all the charm of the original ride. However, there’s one element of the movie that’s mysteriously absent from the trailer: Jack Whitehall as McGregor Houghton, who has been reported to be Disney’s first openly gay character (something we’ve been jerked around on before).

During the film’s production last fall, news broke that Jack Whitehall (a straight british comedian) would play Blunt’s younger brother, McGregor, who accompanies Frank and Lily on their perilous journey. The fairly unremarkable casting announcement was accompanied by a revelation that would mark a first for the Disney company: McGregor was set to be their first ever openly gay character in a movie. Almost immediately after the announcement, there was backlash from several sides. Anti-LGBTQ+ groups argued that a gay character shouldn’t be in a film seen by so many children (ugh, again with this hateful logic?), while some pro-LGBTQ+ groups felt that McGregor shouldn’t be played by a straight actor.

To add to the controversy was the fact that Whitehall’s portrayal is reportedly described as “effeminate” and “camp,” which made some fans worry that McGregor might be treated as a caricature instead of a nuanced character. Additionally, reports were coming in that, during an emotional coming-out scene with Frank, McGregor doesn’t actually use the word “gay,” which brought even more scrutiny to the already hotly debated issue.

Flash forward to almost a year later, and the highly anticipated trailer finally rolls around. One would assume that, given just how much fuss was made over the character’s inclusion in the film (and due to the fact that Whitehall has been spending a significant amount of time doing promotional activities with Blunt and Johnson), McGregor would have a significant presence in the trailer. What we got, however, was the exact opposite. In the two and a half-minute trailer, McGregor is featured just twice, in fleeting shots. Even though he’s one of the only three characters featured on the poster, McGregor has no dialogue in the trailer—if you don’t watch with a close eye, it’s easy to miss him altogether.

So, what’s the deal? Some fans feel that this is an attempt by Disney to minimize his presence in the film to appease more conservative viewers, given the backlash they received after LeFou was implied to be gay in the live action Beauty and the Beast adaptation, which was banned in several countries for that reason. There are also rumors floating around on Twitter that McGregor’s minimal presence in the trailer is due to feared backlash for the exact opposite reason—that the Whitehall’s portrayal was in such poor taste that Disney ordered reshoots, hence his lack of dialogue.

Regardless of the reason for the lack of McGregor in the Jungle Cruise trailer, I’m still holding out hope that Disney handles such a momentous landmark with the respect and care it deserves. Though it may not be in theaters for another few months, I’m cautiously optimistic that Jungle Cruise could be the start to a fun new franchise that features inclusivity and representation, as well as action and heart.