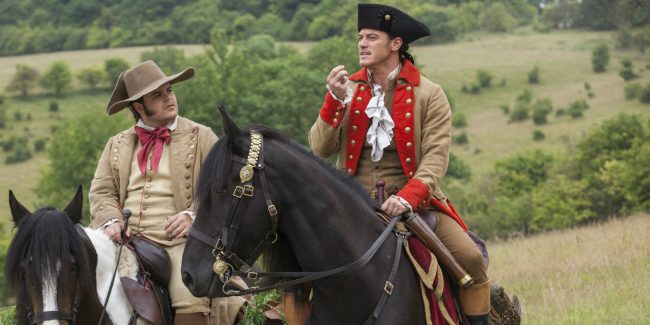 While the forthcoming live-action Beauty and the Beast may be a re-re-imagining of a classic fable, its creators seem to be trying their best to blaze some kind of new trail for LGBTQIA representation in Disney films. In a chat with Attitude magazine, director Bill Condon had this to say about LeFou, Gaston’s crony and comic relief sidekick played by Josh Gad:

He’s confused about what he wants. It’s somebody who’s just realising that he has these feelings. And Josh makes something really subtle and delicious out of it. And that’s what has its payoff at the end, which I don’t want to give away. But it is a nice, exclusively gay moment in a Disney movie.

So, while many are celebrating this as a step forward in LGBTQIA representation, there are a few red flags around the character. Condon’s description of LeFou as a character who is seemingly questioning his sexuality doesn’t seem so bad on the surface, but don’t forget: LeFou is supposed to be comic relief. In addition to being a goofball, he’s a henchman, second fiddle to the hyper-masculine Gaston.

Granted, Gaston’s a villain, but there’s subtext around having a goofy, ineffectual possibly gay character clowning around someone who is supposed to be the epitome of masculinity (for all the great and terrible things that define “masculinity”). It sets up a strange hierarchy. Now, I’ll be the first to admit that we obviously don’t know enough about the plot to draw a full conclusion, but judging by the track record of Hollywood in general when it comes to “first representations” of anybody, I think it isn’t too much of a stretch to be just a little bit worried about how this is supposed to play out.

Playing off someone’s sexuality for laughs isn’t a good look, so here’s hoping that at the very least there’s none of that junk. (Please.)

(via io9, image via screengrab)