Gay love is not a fantasy. 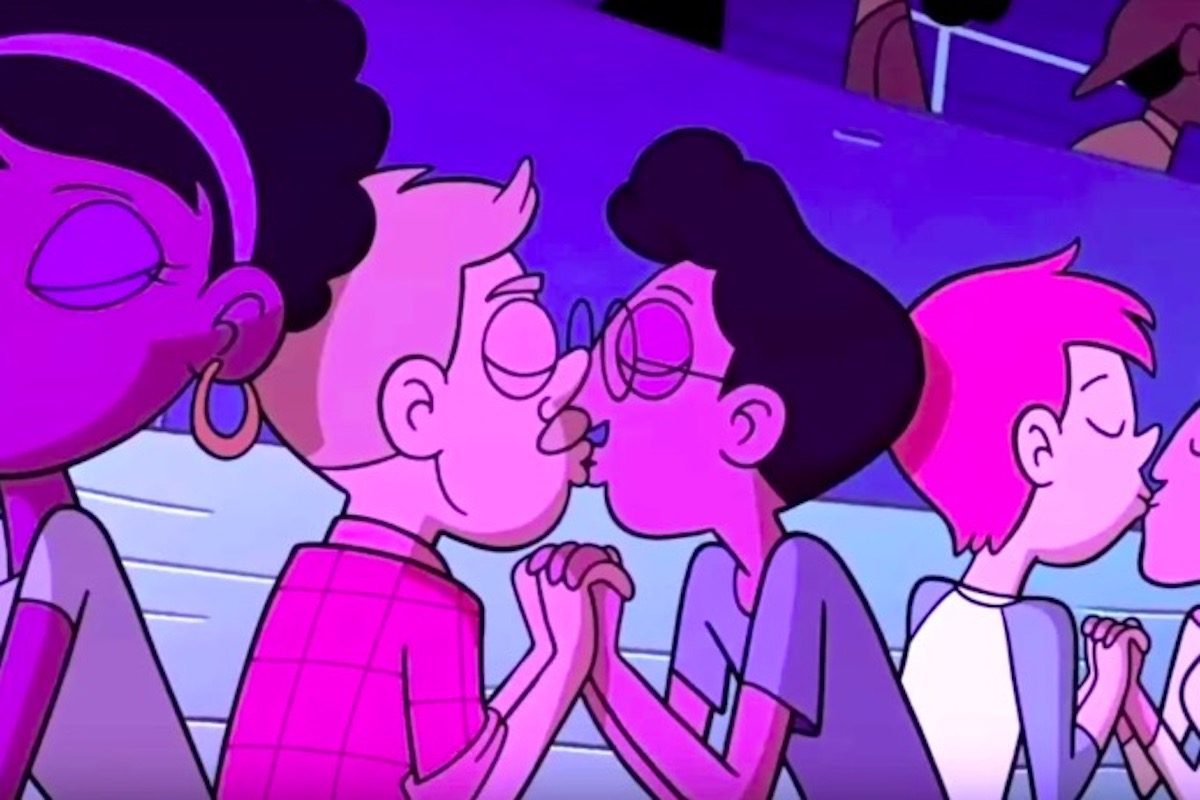 We all have vague memories of our former five-year-old selves—plopping down next to our exhausted parent, squirming and bouncing excitedly as the living room lit up in a soft blue hue, violins soaring as the Disney castle came to life. This is what you have been waiting for all night, the glimmering promise of watching the movie that made you pinch your nose and swallow every steamed beet on your plate. You get around an hour and 45 minutes of a compulsory heterosexual love story, of a damsel and distress and a hyper masculine prince, and your parent basks in the well-deserved silence.

Even with the film long over, the subconscious messages weasel their way into your sleeping brain. You dream of what you internalized to be real: that love is straight, between a man and a woman.

For those of us who grew up cisgender and straight, cartoons and films were surface-level entertainment. We didn’t have to work too hard to identify with characters on the screen, and we’re doing just fine. I’m worried about the children who discover from an early age that they are a part of the LGBTQIA+ community, but the world around them and the media they see does not represent them.

Part of the problem begins with the censorship campaigns created by One Million Moms.

One Million Moms’ website is a collection of conservative mothers who campaign against different issues they have in society “to protect their children from the vulgarity in the media.” Their primary goal remains to promote “traditional family/relationships values.” On cartoons on the Disney channel, there have been a few representations of same-sex couples and talk of creating more gender neutral characters. The main arguments from OMM are that the gay “agenda” is coming “too soon” and is “unnecessary” in children’s cartoons. They challenge Disney for being “politically correct” and not simply providing “entertainment.”

In one of the latest One Million Moms campaigns, they attacked Season 7 of the ABC family show Once Upon a Time, as a lesbian relationship was hinted at between Ruby from Little Red Riding Hood and Dorothy from Wizard of Oz. One Million Moms quickly criticized executive producer Adam Horowitz’s stance that “love is love,” and we need recognize LGBTQIA+ relationships as “just as normal and as a part of every day life as it should be,” saying that he has “distorted and twisted the storylines in these fables.” (In case they hadn’t noticed, that’s kind of Once Upon a Time’s whole thing.)

“Homosexuality continues to be over-represented in the media because producers want people, and especially kids, to think it’s normal and everyday life. In reality, that is their fairytale.” -One Million Moms

The group runs campaigns to encourage advertisers to pull out of shows that run afoul of their strange idea that non-heterosexual romance is a sexually charged topic not fit for children, while heterosexual romance is fine for kids—or including characters who aren’t cis and straight in anything at all, among other perceived affronts to their religion. Their website even includes an FAQ section instructing visitors on how to participate in email campaigns from their personal email accounts rather than routing through OMM as they used to, because they previously had issues with entities blocking their email campaigns entirely. Rather than take a hint, they’ve changed up their tactics.

They also complained about two men kissing (pictured at the top) on Star vs. the Forces of Evil. Why is it that Disney, which reaches at least as many people as McDonald’s, continuously receives conservative backlash? Living in a predominantly heterosexual, gender binary society, when an individual strays from “the norm,” anxiety or depression often results. In order to reassure LGBTQIA+ individuals that they and their relationships are normal, there is an overwhelming need for accurate representation in the media.

Often, LGBTQIA+ characters are used as comedic relief or villains, only defined by their coded sexuality/ gender preferences. Today, the media is attempting to take steps to normalize the spectrum of gender and sexuality, in portraying members of the LGBTQIA+ community living real lives, with functioning relationships and jobsm and experiencing the good, the bad, and the ugly of the world just as any cisgender and heterosexual person.

As my heart warms to see more LGBTQIA+ characters emerge in the media (and I don’t just have to watch an indie lesbian love story with subtitles anymore), I wonder about my own sexuality. Would baby Charlotte, with her blanket and plastic green princess crown, have discovered that she also loved women if she had been allowed to see two women in love? Allowed to see that it was perfectly normal to fantasize more about The Little Mermaid’s Ariel singing on the rock, with the wind in her hair, than Prince Erik? To see not only that it was normal, but that the option was even there?

By treating LGBTQIA+ as “different,” and heterosexuality as the norm, incites violence against the queer community. As those in positions of power—political leaders, church communities, school boards, etc.—fail to validate LGBTQIA+ individuals, this results in pushing the community into a dark, isolated corner of society. This isolation increases the risk for hate crimes and leads to rising numbers of depression and suicide. We need to use the media, as a collective, to continue to give LGBTQIA+ children an accurate reflection of themselves. Media should provide entertainment for everyone, however, the media should also reflect the progressing times we are in, where little boys are allowed to fall in love with princes, and little girls have the courage to decide to be the knight in shining armor.

Charlotte Rose Larson is a graduate of University of Montana, with a BA in Creative Writing with a special interest in Women and Gender Studies. She is currently a freelance writer, aspiring short story writer, an avid Vogue reader, a gym rat, and always on the search for the best donut.