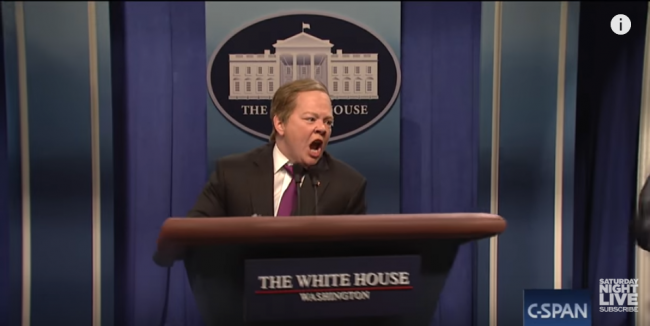 With Alec Baldwin hosting, this week’s Saturday Night Live was full of political sketches. Kate McKinnon appeared as Elizabeth Warren on Weekend Update, Baldwin appeared as Donald Trump taking the Ninth Circuit to The People’s Court, and McKinnon and Beck Bennett starred in a rather controversial Kellyanne Conway/Jake Tapper parody of Fatal Attraction.

Most importantly, Melissa McCarthy returned with her impression of White House Press Secretary Sean Spicer. McCarthy didn’t mix up her formula too much: she attacked the press with her stand, used props to illustrate her points, and continued to perfectly capture Spicer’s anger and ineptitude.

“First of all, I’d just like to announce that I’m calm now,” she opened the skit. “And I will remain calm, as long as you sons of b–I’m not going to do that, because that’s the old Spicey, and this is the new Spicey.”

In addition to referring to Nordstrom’s decision to drop Ivanka Trump’s line as “light terrorism,” McCarthy illustrated “extreme vetting” using action figures and Barbie dolls. “First, you got Barbie coming in: nice American girl, back from a dream vacation. We know she’s okay because she’s blonde! So she gets in. Easy.”

“Now who’s up next? Uh-oh…uh-oh, it’s Moana! Woah, woah. Slow your roll, honey. We’re going to pat her down, and then we’re going to read her emails, and if we don’t like the answers–which we won’t!–Boom! Guantanamo Bay.”

Even though it rehashed material from last week, McCarthy’s Spicer impersonation is so spot-on that it continues to be a delight. She’s just one of the best physical comedians working today.

(Via Jezebel; image via screengrab)