Ballot Selfies Are Only Legal in 20 States, So You Might Want to Go Delete That Photo of Your Vote 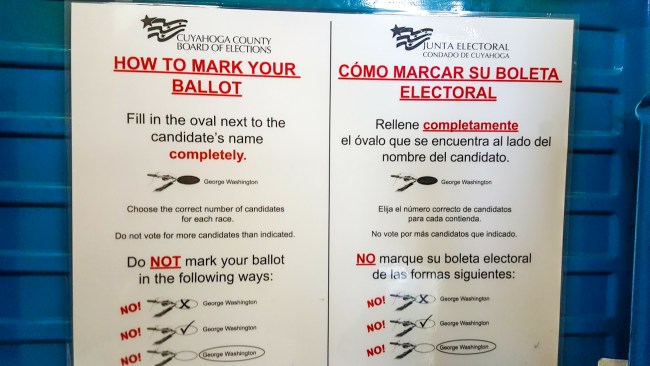 Hey, America. Did you vote today? Of course you did! Did you take a fun photo of your ballot and post it on social media? Hopefully not, because if you don’t live in one of the twenty states where ballot selfies are legal, you just broke the law. The AP has posted a guide to which states do allow ballot selfies, and which states don’t. The majority of states either outlaw such photos or outlaw the usage of phones/cameras in the voting booth.

It’s hard to enforce this type of law, since sooo many people are posting selfies of themselves with their ballots today, or at least photos of their completed ballots. But you can’t be too careful when it comes to making sure your vote gets counted, since the right to vote has been such a hard-won battle. Still ongoing, actually, given that voting accessibility and voter suppression remains an ongoing concern, and it has posed a problem for voters across the United States today. With that spirit in mind, it’s probably best if you circle back and delete that selfie.

Here’s some comedic consolation, though: even Eric Trump didn’t know about this particular law, and he excitedly tweeted a photo of his own ballot. Yes, he voted for his dad, sigh. But wouldn’t it have been hilarious if he hadn’t? Anyway, since New York is one of the places where such photos are illegal, he soon deleted that tweet.

Jokes about Eric Trump aside, this is a pretty silly law, and Techcrunch reports that the ACLU has tried to get it repealed in the past because it doesn’t seem to serve any purpose. It also doesn’t seem like it gets enforced very often. I have a feeling Eric Trump’s vote is still going to be counted, for one thing, and yours probably will too… assuming you did indeed vote. You did, right?

(via TechCrunch, image via Tim Evanson/Flickr)