Mattie Belmonde: The Dark Horse of 'Carmilla' | The Mary Sue 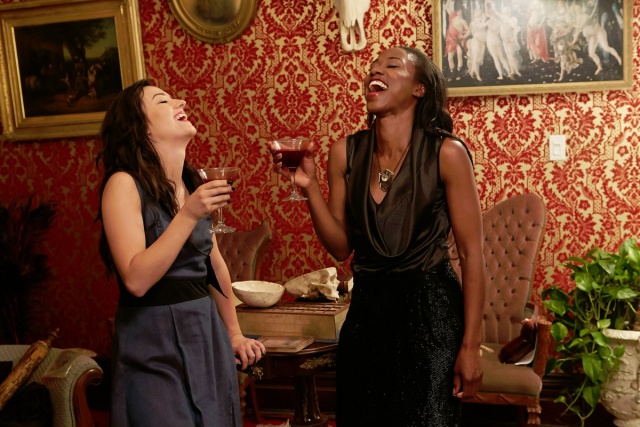 With the Carmilla movie only three days away, I have been eyebrows-deep in a very intense re-watch for personal and professional reasons. There are many reasons why Carmilla has grown to become such a huge success: the amazing LGBTQIA representation, the creative storytelling, the mythology and the stunning cast and creative team that has surrounded the project. All those things are excellent, but for me personally, the thing I love most about the show and solidified it’s importance to me is, Matska Belmonde, A.K.A. Mattie.

[Spoilers below for anyone who hasn’t watched the series]

Mattie is introduced in the second season in S2, E5 “Something Wicked” as new the Chair of the Board, but more importantly as Carmilla’s sister. Mattie is a somewhat antagonistic force mainly because she feeds Carmilla’s more vampire nature. She is hyper realistic and largely apathetic to the lives of humans, filling the role of a traditional alpha-vampire. That being said, she isn’t one-note or one-dimensional. Mattie and Carmilla deeply love each other. Hugging and teasing each other constantly throughout the series. By making Mattie someone that Carmilla loved, considering how hard love has been for Carmilla in the past, it shows us that even though she’s an antagonist, we can trust Mattie. It also doesn’t turn the audience completely against her because the writers, shockingly enough, give her reasons for her behavior.

Mattie is gorgeous: she’s dark-skinned, styled well, cool confident, smart and just all-in-all a badass. She isn’t needlessly victimized, and even her death doesn’t erase her from playing a role in the narrative. Mattie is valued as a supporting character for Carmilla and plays an important part in the emotional journey between Carmilla and Laura as a couple.

Throughout the first season Laura sees the world in a pretty standard protagonist, black-and-white way, with Carmilla being an exception to the typical dark nature of vampirism, believing she can be a “hero,” which is a label that Carmilla has a problem fitting into as the second season unfolds. Carmilla cares about Laura. Just Laura, not Laura’s friends or the other people on campus. Laura views Mattie as someone who needs to be stopped while Carmilla just sees Mattie as her sister, “We’re vampires. A certain amount of murder just comes with the territory.”

Mattie is logical, when the students come to her with complaints about the cuts the school her response is cool and collected, “You might not have liked my mother, but she kept the chaos to a minimum. You idiots killed her, nearly loosed a demigod, and turned this campus into a war zone.Now we have catastrophic damage to repair, and no new money coming in. So I’m gonna cut what I need to cut and sell what I need to sell, and if you don’t like it, you can head for the hills. Again.”

“Sister Spycraft” is an important episode for the set up because it establishes that Mattie is not antagonistic towards Laura out of malice, she’s simply been here before with Carmilla being in love and allowing it to cause her to spiral into disaster. Also, she understands that Laura, despite being well-intentioned is not able to see outside of her ideals and how that will do damage to Carmilla. This is brought to fruition in S2, E18 “Coup De Grace” when Laura hands power over to Baron Vordenberg, the secret villain of the season, risking the lives of Mattie and Carmilla because she gets tunnel vision about Mattie being a killer.

Her death in S2 E30 “Co-Existence” is hard to watch, especially because it begins with a flashback between her, Carmilla and Laura. In the flashback she explains that survival in this world is about realizing that nothing is absolute, she brings up Carmilla having killed the Vordenberg family and how in Laura’s mind it was the Vordenberg ancestor loved Carmilla and she killed his whole family.

Or as Mattie puts it, “Sure. If by ‘ancestor’ you mean ‘necrophiliac’ and by ‘loved,’ ‘grave-robbed her undead body.’” It is the first time we as an audience are asked to see Carmilla’s previous actions as anything other than blood-lust carnage.

Mattie dies not because she’s done anything wrong, but because everyone assumes that she must. Her inability to give a little when it comes to her preserving her and Carmilla’s survival is absolute and it leads to the human character deciding she is guilty even though there is little proof, in the process proving her every point about them.

When Carmilla, in one of Natasha’s best scenes on the series, tells Dany, “I am going to hunt, torture, and kill you” you feel it in every word and expression. “Three hundred years of friendship. Can you even imagine? We saw Electra in Paris in 1709. The ruins of Pompeii. We watched the moon landing. All those memories.”

This scene was also important to me as a viewer because after years of watching Tara on True Blood be treated as nothing more than an expendable body by her “friends and family” it was amazing to see Carmilla be that hurt and sad over Mattie, because you don’t see that. Hell even on The Originals Marcel is considered a “son” to his adopted family, but it doesn’t stop them from betraying him at every turn. Carmilla’s love for Mattie is real, genuine and complicated.

Death doesn’t stop Mattie and she continues to play a role in season three that continues to play off the dynamic between herself and her sister. Tweets from the creators have shown that Mattie will be returning for the Carmilla movie which I am deeply excited about.

The most groundbreaking thing about Mattie isn’t just that she’s a black vampire, and there are so painfully few, the groundbreaking thing about Mattie is that she was a black female vampire who was loved. Loved by the writers, loved by the audience and loved by the characters in the show. Mattie was a fully realized character who was allowed to be nuanced and complicated, and the narrative did not fault her for it. The authors took a character, who in the novella was a racist stereotype and turned her into one of the few well developed black female vampires that have ever existed in media. Period.

As someone who has watched multiple shows: Merlin, Sleepy Hollow, The Vampire Diaries, The Originals, Lost Girl, True Blood…have writing that completely tokenized their brown characters or fandoms that hated them for no reason there are no words to describe how much Mattie means to me. I’ve got her and Dutch from Killjoys.

Only 3 more days until the film is out and KindaTv released these sick new character posters for the movie and I can’t wait.