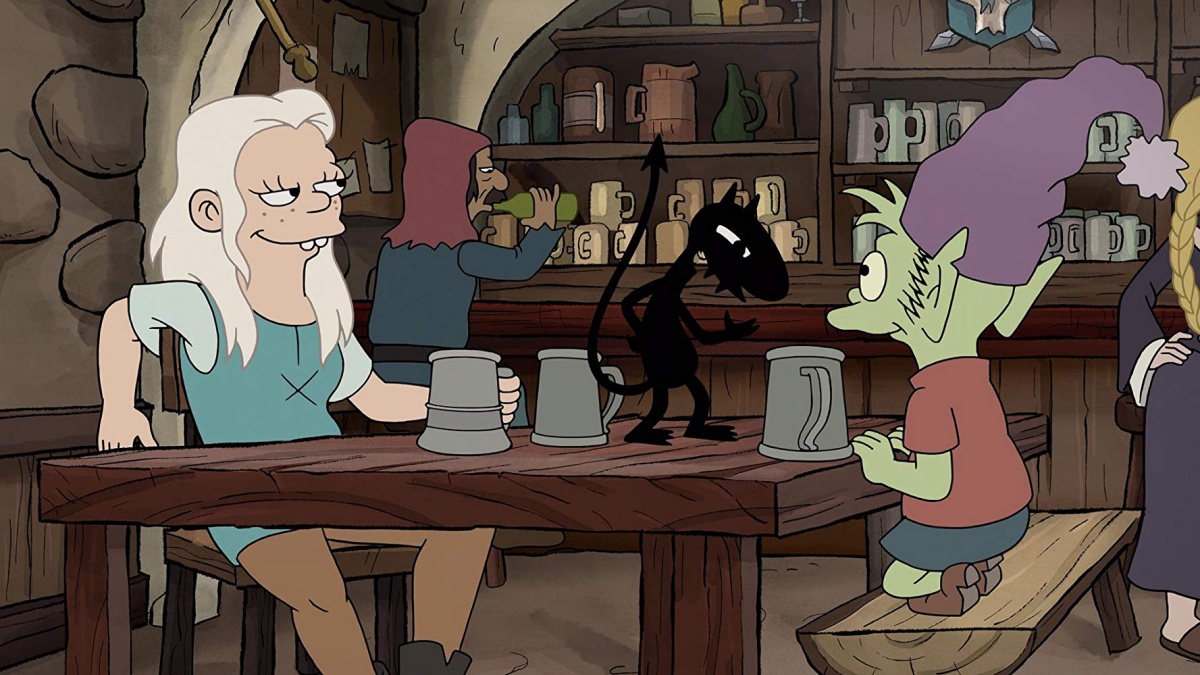 **Spoilers for Disenchantment Season One**

Getting through Disenchantment has been a bit of a slog, not because the show is terrible—it just takes too long to get where it needs to be and Elfo is so annoying in his knock-off Bart Simpson clothes and “friend-zone” personality that it becomes tedious. However, after finishing the season (and there is a second season in the works), the thing the show needs more than anything is more ladies.

Matt Groening said that Disenchantment was meant to have a “feminist bent” as he explained in an interview with Exclaim:

“If there are any overt politics, it’s that it’s got a definite feminist point of view,” Groening says. “And having a woman at the centre of the show is just, for me, a refreshing way to tell stories.” Groening credits Bean’s lovable fierceness to the character’s voice actor. “Abbi Jacobson brings a really strong point of view,” he admits. “You try to write the funniest or most moving lines you can, and then you have Abbi Jacobson come in and riff on it and take it to a different place and you go, ‘Oh my God. It’s ten times better than anything we could have thought of…’ She ad-libbed some of the best lines, making the feminist bent to the show even more overt.”

Of the main/reoccurring cast of female characters, there is only Bean (Abbi Jacobson), her step-mother, Queen Oona (Tress MacNeille), Queen Dagmar, Bean’s mother (Sharon Horgan) and Bunty, Bean’s lady-in-waiting (Lucy Montgomery). None, save for Bean and Dagmar, in the very last episode, get to do anything of real value in the series.

Bean doesn’t have any female friends and spends the entire series being a failure either by her own self-destructive behavior, motivated by Luci, her personal demon (Eric Andre), getting frustrated with her father, King Zøg (John DiMaggio) and being lusted after by … yuck … Elfo (Nat Faxon).

Looking at the writing credits for the first season there seem to be two female writers, Jeny Batten and Shion Takeuchi, involve in Disenchantment, but there is still something to be a said about a show that frames itself as the coming-of-age adventure/parody of a teenage rebel princess and she is the least interesting element in her own story until the very end of it. Not to mention she only has guys on this adventure with her. It tokenizes her in her own story.

I did, very much, want to like Bean and on paper, she sounds like a lot of fun. A bawdy, drinking, sexual princess character who wants to go on adventures? Sign me up. Yet, she just comes off as a PG-13 version of Ariel from The Little Mermaid. Her father Zøg is no doubt a blowhard and a jerk, but beyond the first episodes with her wedding drama, he sort of just lets Bean do whatever she wants with little consequence. The adventures she “goes on” are usually just teenage outbursts of rebellion or in response to something foolish she’s already done.

It’s just disappointing. Bean has no real depth and her conflicts are nothing we haven’t seen before, plus she’s too spoiled to actually give up the comforts of being royal (which is something actually interesting about her), but then it also limits the whole “adventure” part of it.

Again, with her clearly evil resurrected mother back and hinting that Bean has some sort of magic bloodline, there is plenty of room for Bean to grow into a person, but I just hate when something is marketed as being a female-centric show and you know more about the male characters by the end of the story. The fact that Zøg is probably the most well-developed character on the show is saying a lot.

In season two, I hope they bring in a more balanced collection of male and female writers and really start crafting out a story for Bean where she can be pro-active and interesting as an anti-hero, instead of just being a collection of bland “cool girl tropes.”

We will see if season two will make that bent even more overt that the “it’s such a shame a woman can’t be in control of her own destiny” stuff that we have literally already had Disney unpack, and instead have some more fun. Intending a show to be feminist is great, but it means little if you don’t have an interesting female lead.