Disenchantment Shows Promise, But Struggles to Find its Own Voice 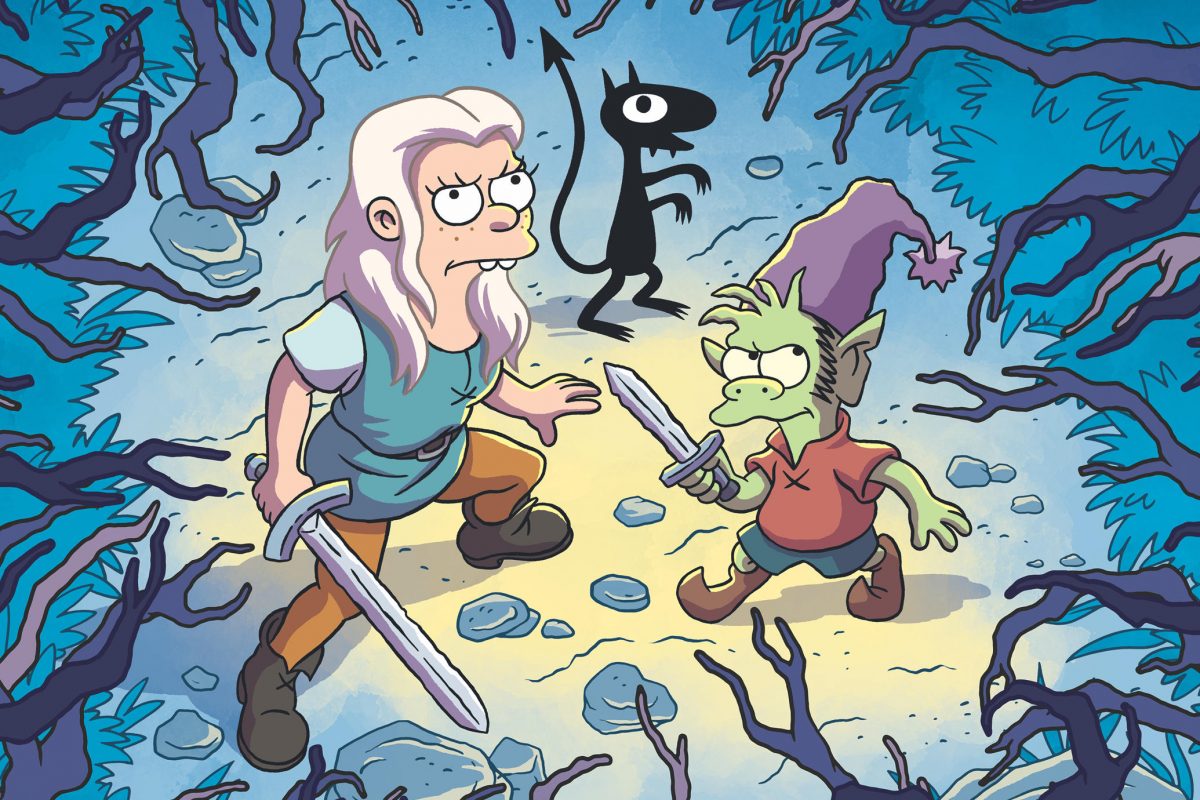 After satirizing present day American life in The Simpsons and skewering science fiction tropes in Futurama, Disenchantment dives headfirst into medieval fantasy. The show centers on Princess Bean (Broad City’s Abbi Jacobson) a hard-drinking, partying princess who would rather scrap it up at the local tavern than live the courtly life in her kingdom of Dreamland.

When Bean’s father King Zøg (John DiMaggio, the voice behind Bender) arranges a marriage for political alliance, Bean rejects her royal destiny and tries to take control over her own life. Along the way, Bean teams up with naive, lovelorn elf Elfo (Nat Faxon) and her cat-like personal demon Luci (Eric Andre) to have adventures, get drunk, and reject her family’s insistence on what a Dreamland princess should be. Along the way, there are walrus mermaids, evil sorcerers, and sex worker fairies. Disenchantment was clearly inspired by Game of Thrones by way of Monty Python and the Holy Grail.

Disenchantment is a Netflix series, and without the confines of network television censors, the show delves more into violence and sex jokes than Groening’s previous work. This gives the series a harder, crasser edge than its predecessors, which isn’t always a good thing, unless elf sex jokes are your thing.

The series struggles with its three core characters, who suffer from a lack of nuance and development. We know that Bean doesn’t want to be a princess, but we know little else about her or her motivations. She’s clearly cut from the same cloth as Futurama‘s Leela, while Elfo is a goofy rube version of Fry. And pet demon Luci is a hard-drinking, cigarette smoking misanthropic id, so he’s basically Bender.

But what really holds the series back is its lack of heart, something that Groening shows usually have in spades. The Simpsons works because we know that, no matter what happens, the Simpsons love each other. Futurama has the same heartstring-tugging sentimentality, with Fry and Leela’s slow burn romance and the friendship of the Planet Express crew. There’s a warmth in both shows that I have yet to see in Disenchantment.

Still, there is plenty to enjoy in the series: the beautifully rendered animation, the ridiculous citizens of Dreamland, a suitor impaling himself on an iron throne. There’s a lot of talent in this series, and I’m curious to see where they go if they get a season 2. Like its heroine Bean, Disenchantment has potential. Now it just has to figure out what to do with it.